Artists and gallery folks headed to Florida for Art Basel at Miami Beach will want to arrive early enough to catch the big name celebrities at the opening events. Kanye West arranged his tour schedule so that he could be there this week, not just as an art lover but a participant. 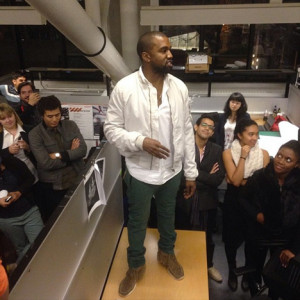 On Wednesday, Surface Magazine will host an installment of its “Design Dialogues” series, with Hans Ulrich Obrist moderating a discussion about art and design between Kanye West and architect Jacques Herzog. West gained some architecture cred when he showed up a couple of weeks ago (by invitation from the African American Student Union [AASU]) at the Harvard Graduate School of Design, where he gave away free tickets to his show and chatted for a couple of hours about creativity, design and architecture. “I really do believe that the world can be saved through design,” he told the students, “and everything needs to actually be ‘architected.’” There was a shade of mockery in some of the media coverage of the visit, but the AASU co-president explained that West is actually quite knowledgeable about architecture and dismissed the criticism: “There’s a long history in the United States of making fun of black people that actually make it.”

On Wednesday evening, West will participate in Vanessa Beecroft’s debut of a piece in the group exhibition “Affordable Care” at Mana Wynwood. The performance will include Beecroft sculptures, choreographed models and some clay; there is only speculation on West’s contribution.

West, who studied painting at Chicago’s American Academy of Art before becoming a college dropout, has some hardcore art world fans. Just this past week, critic Jerry Saltz published an essay exalting West’s new (and already oft-ridiculed) music video for “Bound 2” as a prime example of what Saltz is calling the New Uncanny: “un-self-consciousness filtered through hyper-self-consciousness, unprocessed absurdity, grandiosity of desire, and fantastic self-regard.”

Protected: Art? Or food for the beast?