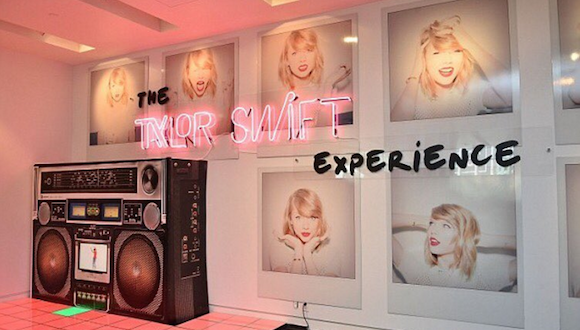 More and more famous people are dipping their toe into the art world to try and let their inner art flag fly. Earlier this year marked another art attempt by Renaissance man James Franco, last month we saw Kanye West make his gallery debut in Los Angeles, and just a few days ago we learned of Kendall Jenner’s desire to show her perspective on life through performance art.

And in the not-really-art category, it was also announced this week that The Taylor Swift Experience, a museum exhibition devoted entirely to pop music superstar Taylor Swift, will be opening at New York’s Grammy Museum on November 18. The show includes handwritten lyric sheets, costumes from Swift’s music videos, instruments, memorabilia from Swift’s childhood, and much more.

Which celebrity would you most like to see making art? We’re thinking Bono or Kristen Stewart or the guy who plays Quicksilver, but in the X-Men movies, not the Avengers movies. You? Feel free to share your thoughts below.

I like John Water’s stuff. Shia Labeouf if he’s not taking himself too seriously. Miley needs to work at it more. Jim Carrey is pretty bad.

“…but I don’t think there’s anything wrong with thinking of pop as an art form – you’ve just got to think of it without a capital A. Lower-case art is always best.” – David Bowie (he also painted and drew)

It’s best if they can find ways to make it part of their current work instead of this idea of I Am Going to Be an Artist Now in some gallery.

I would donate to a good cause for Bono NOT to make art.