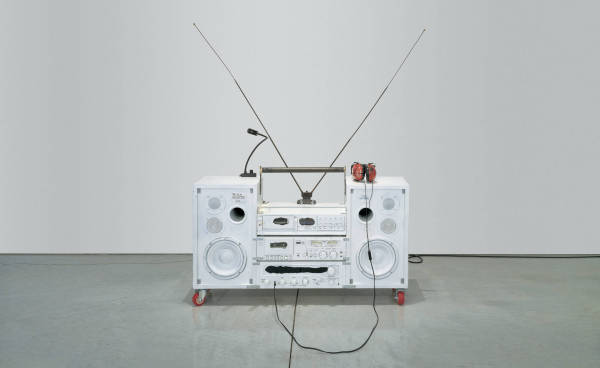 The Contemporary in Austin–all three of its locations–will play host to the first-ever institutional show of Tom Sachs works in Texas. Beginning in January, Boombox Retrospective 1999-2015 will spread out across the Jones Center, Laguna Gloria, and the Art School, and: “the project demonstrates the artist’s unique, imaginative, and rigorous DIY aesthetic and is comprised largely of works that riff on the idea of the ‘boombox,’ the iconic emblem of 1980s hip-hop culture.” Sachs has constructed these ceramic boom boxes (some of them he recently made at the Art School) with working parts that allow them to play songlists put together by the artist and some of his well-known music-industry pals. Regardless of function, they’re beautiful, strange, and a heck of a lot of fun.

Though the exhibition will consist of other examples of Sachs’ work, the Jones Center location will host the more comprehensive selection of the recent boomboxes, and Laguna Gloria will showcase some of Sachs’ large-scale bronzes sculptures. In conjunction with the exhibition, at Laguna Gloria Sachs “has curated an exhibition of works by JJ PEET, who taught Sachs to work in ceramics and is the de facto leader of a four-person, off-kilter ‘ceramics circle’ that meets weekly in New York and include Sachs in its ranks.”

Huma Bhabha: Other Forms of Life at The...