Sculpture, Cinema, and a Cat! Who Needs More Than That? 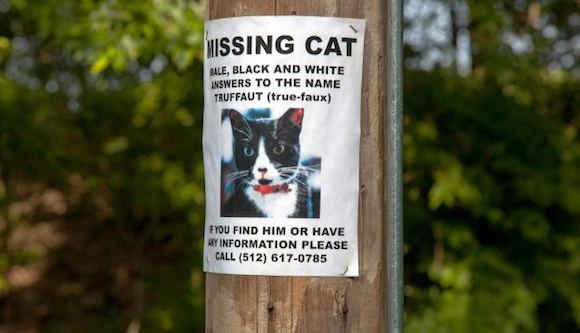 Well, we’re ashamed to have missed International Cat Day on Monday, August 8, but we’ll try to make up for it by sharing an article from the Austin American-Statesman about a recent installation at Contemporary Austin’s Betty and Edward Marcus Sculpture Park at Laguna Gloria.

“Missing Truffaut,” by Austin-based artists Teresa Hubbard and Alexander Birchler, is installed along a pathway at Laguna Gloria with a streetlight (it’s lit at night), with a missing cat poster stapled to it. The homemade-looking notice advertises a lost black and white male cat who “answers to the name Truffaut (true-faux)” and an Austin phone number to call with info. (Call!!! 512-617-0785.)

Hubbard and Birchler have been making multi-media work about cinema culture together since 1990 and, when they spotted a poster for a lost cat named Truffaut a few years ago in East Austin, they knew it could be an homage to the French film director Francois Truffaut (both the cat’s name and the artwork they would later create).

Below is a short video of Truffaut working with the “cat that can’t act” in Day for Night (1973). (By the way, there is still time to catch up on cat celebrations—October 29 is U.S. National Cat Day and October 16 is U.S. National Feral Cat Day.)

Contemporary Austin Pairs Up Artists with Teens for...