Huma Bhabha: Other Forms of Life at The Contemporary Austin 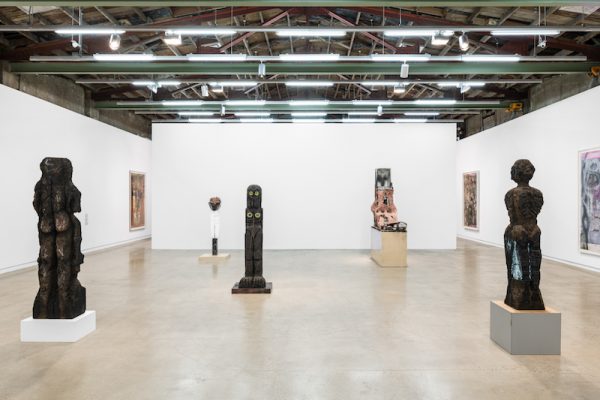 Huma Bhabha is having a moment. Last year, The Metropolitan Museum in New York awarded the American sculptor the prestigious commission for its outdoor roof garden, and a monumental ensemble of two of huge figures commanded the museum’s rooftop from April to October. This coming March, the Institute of Contemporary Art in Boston will mount her largest museum show to date.  In between, The Contemporary Austin’s exhibition of her work splits the difference between sculptural tableau and mid-career survey. 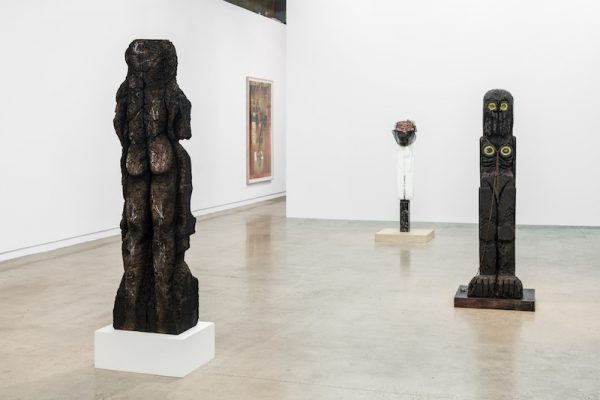 In the main gallery on the second floor of the Jones Center, six carved figures stand on pedestals. Totemic, blocky and rigid, as if still trapped within the hunks of the materials from which they were roughly hewn, they do not interact, necessarily, but they each seem to possess an undeniable incarnate presence that emanates outward like a forcefield. Humanoid, but not quite human, most stand more than six feet high, recalling primitive idols or monstrous beings from the realms of fantasy and science fiction. The curvaceous but eroded Student (2009) seems to face both forward and back, Janus-like. The body of Mechanic (2015), fashioned from a tall rectangular mass of cork, features deeply incised clefts that crudely indicate limbs and breasts, and detailing in black that appears burnt. Its bulbous white Styrofoam head bears round protuberances on either side and a painted masklike face akin to that of the figure in Edvard Munch’s The Scream. (Ringing the walls, a series of painted and collaged photos of various subjects all resolve into similar masks.) Although ostensibly nude, Mechanic resembles an old-fashioned deep-sea diver or a helmeted astronaut.

Constantium (2014), formed from similar materials but then cast in dark bronze, stares straight ahead from two hollow yellow eye sockets above vertical gouges that make the figure evoke popular representations of Cthulhu, the tentacle-faced demon-god from the stories of H.P. Lovecraft. Yellow also rings the figure’s nipples and its huge claw feet perch upon a box with a hinged and latched lid from which a chain rises to circle the head and neck — a necklace or hood as much as a leash. 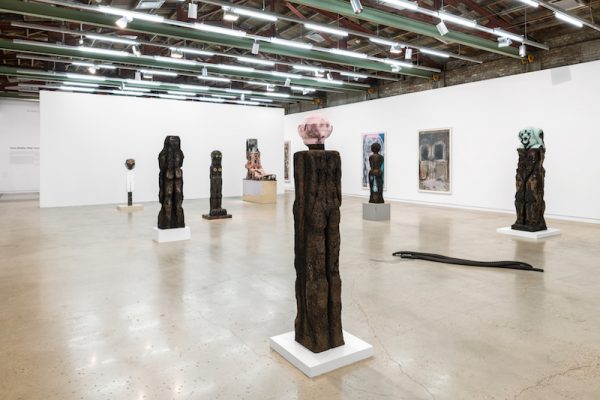 All of these figures feel alien, implacable, larger-than-life — terrible deities of unknown origin and uncertain purpose.  Bhabha’s sculptural materials — cork, Styrofoam, bronze, clay, and, in one case, marble — that she attacks with an apparently raw vigor (she has been know to use an axe!) lend her creations an expressionist, battered, crumbling mien that suggests archaeological finds recently brought to light, relics from an ancient and vanished civilization. A 2011 work of an enormous broken foot on a high pedestal, Jhukarjodaro, named after a site in the artist’s native Pakistan, makes the association with ruins explicit; horizontally ripped photocopies of scrubby landscapes wheat-pasted to the plinth picture “the lone and level sands.” Reeking of Ozymandias, the sculpture’s assemblage of torn posters, Styrofoam packaging, chicken wire, and gloppy clay practically deteriorates as we watch, remains of the hubristic “colossal Wreck, boundless and bare,” of garbage culture. 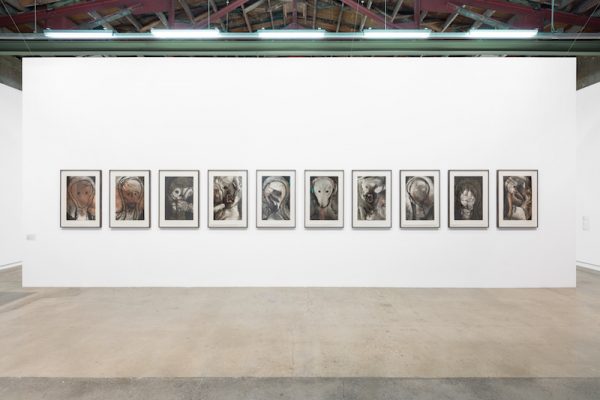 Bhaba’s upbringing in one of the great crossroads of history undoubtedly has influenced her obvious love for ancient art, Western and non. Echoes of hieratic Egyptian pharaohs and only slightly more naturalistic archaic Greek kouroi resonate in her work, but so do the memories of stone figures on Indian temples and colossi such as the Buddhas of Bamiyan, both in their previous ruined state and after their destruction by the Taliban in 2001. Pakistan, we should remember, was the cradle of the syncretic Greco-Buddhist kingdoms of the ancient world. But Bhabha’s sculptures equally refer to more recent sculptural legacies. The way she has only half liberated her figures from their blocks brings to mind Brancusi’s attitude towards his various versions of The Kiss. Her delineation of limbs and other features by drawing on, or scratching into, surfaces conjures similar treatments of figures by Picasso and Giacometti. And the oversize feet in Constantium also recall Giacometti and his rooting of standing figures with very large extremities. As heir to multiple sculptural and cultural histories, Bhabha operates as a great synthesizer, yet her works never feel derivative of her forebears; they seem to glower with their own aesthetic logic and enigmatic meaning. 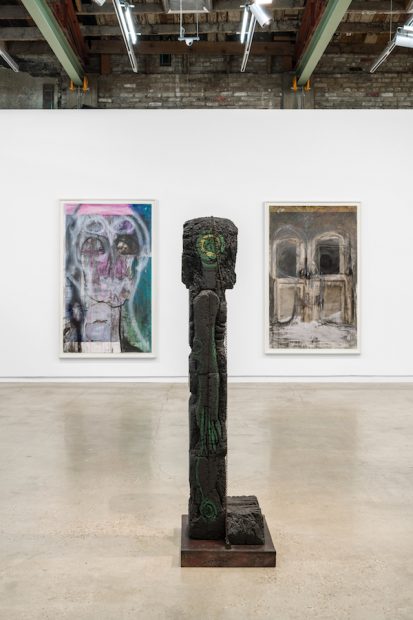 As much as historical artifacts or stern gods, however, Bhabha’s beings can feel like victims. Stiff, upright, and unmoving, their feet always planted firmly together, their arms bound to their sides, they never escape their sculptural confines. Their earthy matter often seem to disintegrate before our eyes. They will never know contrapposto, a twisting torso, or a gracefully extended limb. And, although otherworldly, they appear uniformly female. We can undoubtedly discern an underlying feminist intention; powerful, awesome, and demanding of obeisance, Bhabha’s figures nonetheless stand grotesque, imprisoned, and subject to corrosive forces beyond their control. They might represent allegories of the condition of Woman — political or psychological, timeless or entirely of our moment — but that reading comes off as too specific and too tied to slightly oblique content to completely account for the sheer sculptural power and atavistic thrill they deliver. 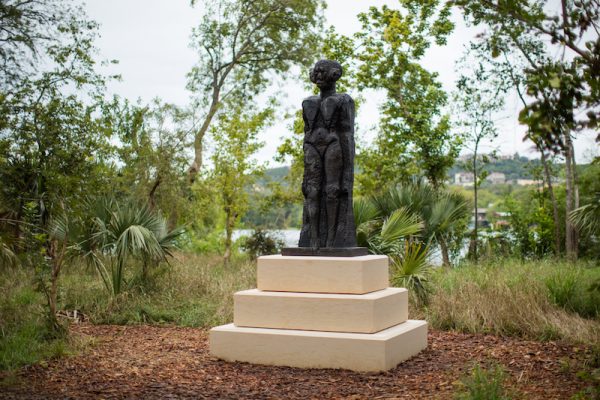 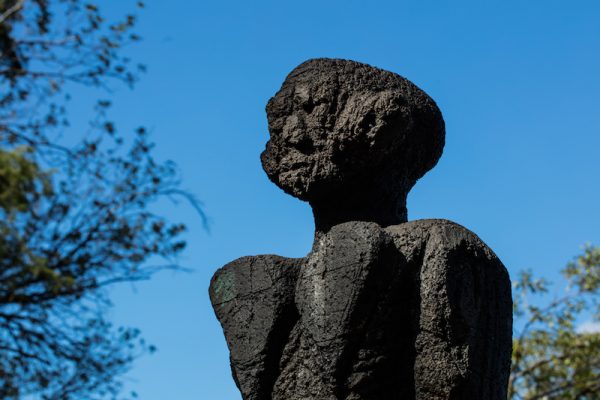 At The Contemporary’s second location in the sculpture park at Laguna Gloria, one more sculpture stands on a stepped travertine pedestal overlooking Lake Austin. Deeply carved, the blackened bronze God of Some Things (2011) wears the vestiges of her original block at her back and sides as if it were a cape. Defiantly naked and female, she has breasts shaped like upside-down teardrops, flattened in front where the cork must have ended, and deep lines defining her groin. Round buns on either side of her face remind us of Princess Leia or the Lady of Elche, an ancient Iberian goddess with an elaborate wheeled headdress. A nude divinity in a wooded cove, she might invoke the playful nymphs of Classical myth or their descendants, the endless unclothed ladies in landscapes that lard Western art. But Bhabha’s weathered God seems less familiar, less spritely and voyeuristic, more brutish and abstract. She manages to look simultaneously like a Polynesian Tiki, a wooden carving by Gauguin, and one of Matisse’s Back sculptures. Glued to her forested spot like a sentinel, she might have stood there for ages, a mute witness or guardian. It is hard not to see her as a personification of an essential feminine energy manifest in nature — as anachronistic as such a claim sounds in 2019 — or a late addition to art history’s centuries of “The Nude,” but it is Bhabha’s not inconsiderable achievement that, in the context of her potent reinvigoration of figurative sculpture, we can.

Through January 13 at The Contemporary Austin, Jones Center on Congress Avenue and Laguna Gloria, Austin