With the exception of one misstep, One and Many, Deborah Roberts’ current solo show at Art Palace, is raw, painful, beautiful, grotesque, vulnerable, and vicious. The first line of her handout quotes James A. Baldwin: “People are trapped in history and history is trapped in them.” Roberts carries on her shoulders the Post-Black ideologies that she grapples with. Through paint, collage, and sculpture, she is locating herself within three histories she has inherited—of being black, of being a woman, and of being an artist working within the largely white, chauvinistic modernist vocabulary of photocollage and abstract painting. 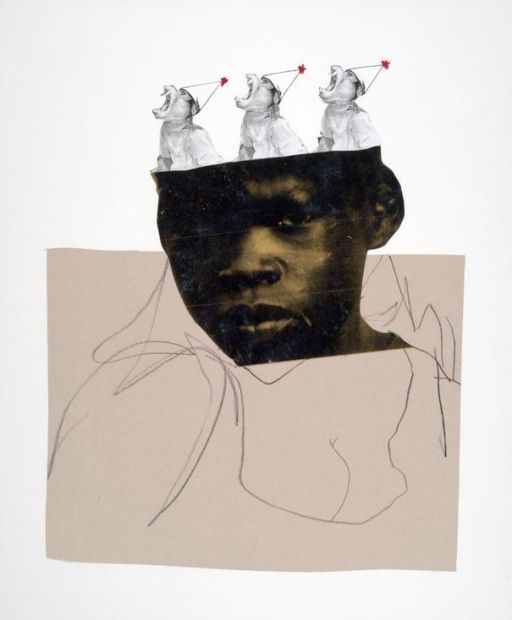 The most compelling of several 14 x 11′ collages is Untitled No. 33. A black woman’s face appears halfway down the paper, a face that has been crudely sliced off at the neck and forehead. Roberts cracks open the woman’s skull, exposing the private thoughts residing in her head without her permission, and it shows. The woman stares at us head-on, her eyes emanating a complex mixture of defiance, sadness, and disgust. Three lab monkeys with red-tipped party hats pop out of her head, screaming. Roberts has replaced the woman’s body with a blind contour drawing in pencil. With disproportionate shoulders and fumbling cleavage, the body Roberts has given her is drawn in a way that is curiously investigative and abject. The pencil drawing may at first seem hurried and dismissive, but it is as important as the monkeys, which are visually more pronounced. The woman’s face and screaming monkeys blare anger at full volume, but the quiet body replenishes the work with a kind of self-deprecation and uncertainty. It’s the anchor that keeps it multi-dimensional, and prevents it from becoming overly didactic. 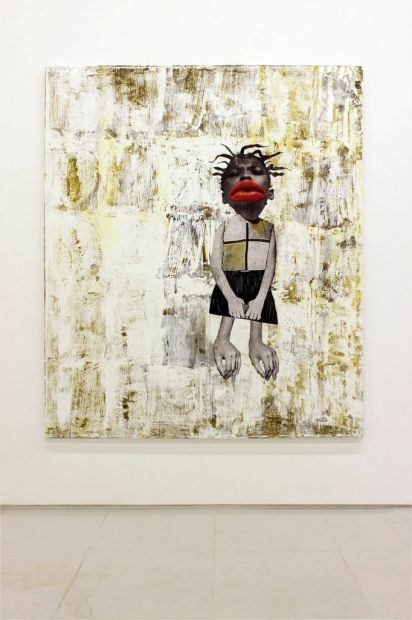 In the largest work in the show, Buttress, an all-over surface smeared in vertical strokes looks curdled and muddied, like gas station concrete stained with dripping oil. A human/creature floats at center-right; the same woman’s face that populates most of the exhibition, this time encumbered with a body full of parts that are clearly not her own. Roberts plasters plump, fire engine red lips that look like they were ripped out of a L’Oreal ad over her face—lips so large that they extend all the way from the bottom of her nose to below her chin. Her torso looks like a pieced-together catalog model; her legs, constructed from hands, look like vile talons clasping onto an invisible branch. Small and ever so slightly slumped, the collaged woman is equally as empathetic as she is grotesque.

With Buttress, Roberts combines old strategies of Abstract Expressionism and Dada. She has done nothing new here, and that is precisely the point. Her collaged creature floats, hopelessly lost, in a field of abstraction, yet she attempts to grasp onto something. And her collage clarifies nothing: the creature meanders between a child and an animal, a woman and a monster. Roberts is trying again and again to communicate via a modernist language and fails to give us anything we haven’t seen a hundred times before. But it is the trying and the failing, but trying anyway—the incapacity to communicate—that is oddly resonant. Despite everything, Buttress remains authentic and wholly honest. 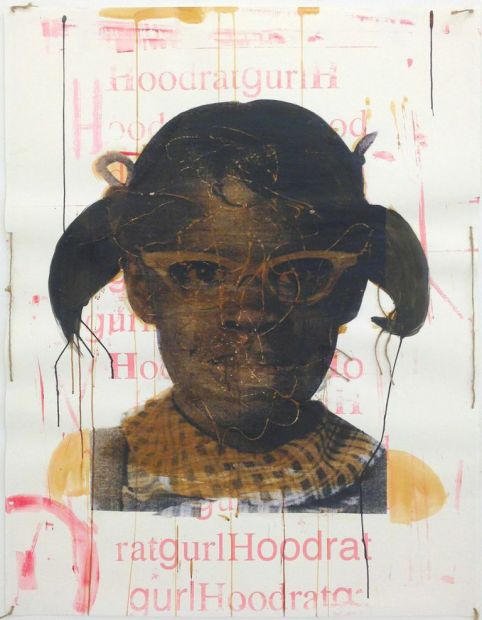 In Hoodratgurl, Roberts strays from her M.O. of collaging disparate body parts and instead presents us an unadulterated portrait of a young girl. Unlike the adult woman in Buttress, the girl’s eyes are lit up with all the sweetness, innocence, and naïveté a child could possibly muster. Like a scrolling, repetitious advertisement, the printed phrase “Hoodratgurl” scales the length of the paper in the background. This little girl has already—unknowingly—been commodified and relegated to a disposable sex object before she’s even gotten to know herself, much less be able to tell us who she is. There is no anger present in this piece—only despair, and it is heart wrenching. 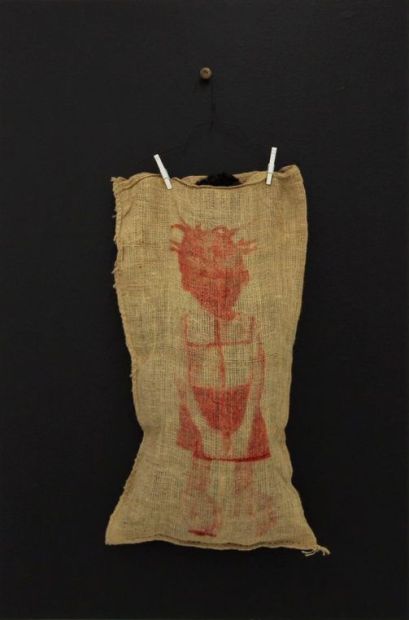 The only time Roberts falls short is with her one sculpture, Beautiful. Even though she fills up a burlap sack with human hair, it hangs on the wall reading as a two-dimensional work, and it can’t compete with the rest of her paintings and collages. The power of Roberts’ work lies in the faces: how they stare us down, how they are screwed up, how they command our empathy. But that confrontation here is missing. In fact, the strongest part of the piece—the appearance of the creature Roberts made for Buttress—is only a print, presented as an accessory, undercutting its importance.

To make political work without literally telling the viewer how he should think or feel is a tall order, yet Roberts pulls it off masterfully by intertwining the personal with the ideological. She infuses her work with subtle yet powerful empathy that is just as ferocious as it is vulnerable.

OOh, I have to disagree about ‘Beautiful’. That is a cotton-picking sack. ‘Nuff said.

Too short for a cotton pickin sack…its a croker sack, plain but hardly simple. In fact, not nearly enuff said there as it relates to beauty, period. Somebody help these chillrens…

I figured it for a chillren-sized. But lordy- this work is the best I’ve seen in a long time, and I would love to have a conversation with Roberts.

Artist talk on the 11th at the Art Palace. I’ll be there.
Cant miss me. Tall AA male schlepping a real cotton sack and a real bag of synthetic hair…i mean beauty.

A schlep from Fort Worth- but worth it- DANGIT. I want to hear this one…

Garry, glad you announced the artist talk here…Deborah will anyone be taping it and sticking it on YouTube? Maybe that way Jan could hear it after all…

Hi,
you have to check with Art Palace to see if they are going to tape the art talk.

Maybe I can wheedle Deborah into getting together with Lauren Cross at the WoCA Gallery/Studio in FW. Lauren pus on talks, activities, and thoughtful exhibitions…. just saying’….

Hello Deborah it was great to see you after all these years. I remember you being an artist in middle school and for the first year I attended Johnston. I hope to come out to one of your events and get that opportunity to see you art collections. Just let me know and I would gladly be there.