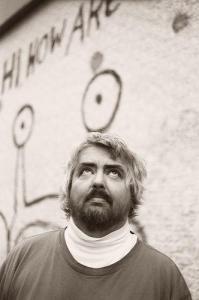 Daniel Johnston, one of Austin’s most insider outsider artist/musician/personalities, has designed a new mural which will be unveiled on Monday, December 1 at Nau’s Enfield Drug in West-Central Austin. The outside wall of the vintage pharmacy/soda fountain will not be the first site of a Johnston mural in Austin. (Johnston’s iconic “Hi How Are You” mural on the site of the now-former Sound Exchange went up in 1992 and is an Austin landmark. It’s currently undergoing restoration and the brass plaque treatment.)

The Austin ad firm GSD&M will present the new, as-yet-unseen mural at a press unveiling to Austin’s mayor Lee Leffingwell at 11 a.m. on Dec. 1 at Nau’s. Tom Gimbel, Daniel Johnston’s manager will attend. (First reader to catch sight of the mural: snap a pic for us, please.)

Also, “because of Daniel Johnston’s love of superheroes, GSD&M chose the Superhero Kids organization, a longtime community partner whose tireless work goes to fight childhood cancer, to benefit from the sale of T-shirts featuring the mural and a social campaign running through December 31.”

C’mon Austin, Watch Out For Your Street Art...