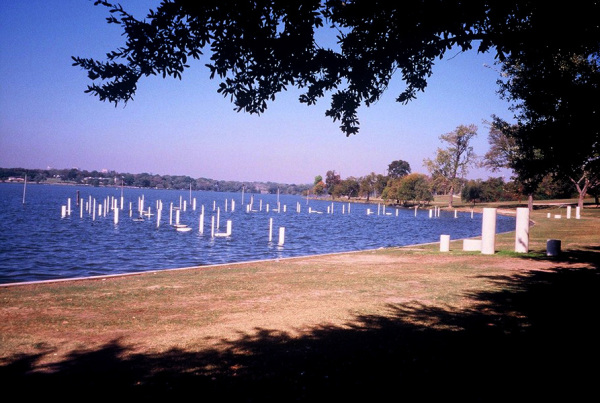 The controversy around the fate of a deteriorating public artwork installed at White Rock Lake in Dallas raises some major issues about Dallas’ relationship to art and its artists, and while there are a couple of red flags still waving around in the mess, there are some recent signs of positive movement as well, though I’m wondering if it’s for the right reasons. And then I’m wondering if it matters what the real reasons are for the positive movement, as long as it continues.

The sculpture in question is White Rock Lake Wildlife Water Theater, circa 2001, by Frances Bagely and Tom Orr—two art-world veterans of big art commissions who knew going into it that a complex (and functional) sculpture installed in the water would require upkeep, as all public artworks do in every city, and especially ones out in the watery elements and intentionally crowded with wildlife. In January of this year it came to light that the Office of Cultural Affairs, after having neglected Water Theater for years, wanted to scrap the piece. But deaccessioning public art is serious and rare, as more people are learning, and since then members of the Dallas public have, in a series of Cultural Affairs Commission meetings and in the comments sections of local publications, quite aggressively come down on both sides of whether the piece should be rehabbed or ripped out forever. I understand the word “trash” was thrown around a lot by non-fans of the work, as in: “That so-called [art] is trash.” In response the Commission has kicked the can down the road. But that’s the first problem: Why was the public allowed to weigh in at all? It sets a miserable precedent (even if in this case it leads to the piece being saved).

Water Theater got attention because the city had not maintained it. So, my second question is that while Dallas (and Texas) has worked to convince everyone here and elsewhere that it has weathered the recession well—that it’s strong and healthy and ready to take on new big business and other sophisticated newcomers and that its Art World with a capital “A” is a serious cultural draw, with the Arts District as its leading edge—why did it abolish its funds to maintain its public art collection in 2009? 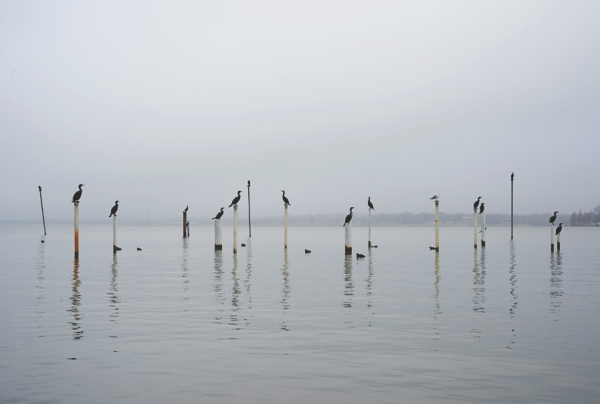 The city has more than 300 pieces in its public art collection, commissioned and purchased over decades. Budget cuts were a theme in every city in 2009, but this cut is the kind that literally makes a city look bad, and it encompasses some weird misunderstanding by Dallas about its role as steward of the collection it has so deliberately built. Part of that budget has been restored this year, but the cut left Water Theater extra vulnerable for a five full years, which landed the piece in a hot seat it never deserved to be in.

While I sat in on the latest meeting held last week by the Cultural Affairs Commission, which was again letting members of the public speak out and was then expected to vote on the matter, I nursed a slight but growing nausea about the national press getting hold of the issue and using it as yet another example of how provincial Dallas can be. I could sit there and blame the members of the public who stood up to once again voice their hostility toward Water Theater, but again, why were they, or even the advocates of the piece, allowed to enter the conversation at all?

It is embarrassing, though, that in Dallas both the Office of Cultural Affairs and the general public have not internalized the relationship between a city and its public art collection. It should go without saying that not everyone can possibly love everything in the city’s collection. That’s why most public art commissions play it safe with work that’s conservative and abstract, yes, but that’s also why the city has to take full responsibility for the art after it goes into the collection, including of course its conservation. And that’s why Bagley and Orr, pre-empting criticism, did their due diligence and consulted with parks experts and ornithologists and the like before building the piece. I wasn’t in Dallas then, but I understand that when it debuted it was very popular. I also understand that if funding brought it back up to snuff, improved technologies would make it more stable. 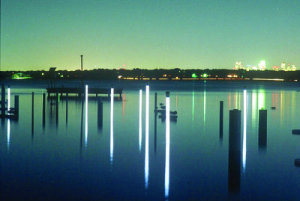 But let me put it this way: if a giant truck jumped the curb at Dallas City Hall and rammed into the Henry Moore sculpture, should your Aunt Linda then opportunistically petition to have it destroyed rather than restored, just because it doesn’t meet her definition of art? Of course not. If you play out this people-verses-culture scenario to its full conclusion, “Idiocracy”-style, the implications are horrifying.

There must have been some violation of policy from the top down here in getting the public involved in the protocol for deaccessioning public art, unless there was no policy at all. Let me add that Dallas has only ever decommissioned one piece in its public art collection, years ago and reportedly due to fire damage.

Here’s the upshot of that latest meeting, though. While up until last week a lot of Water Theater fans thought it was likely a goner, a vote to table the matter for a bit longer happened yet again, this time with money in place to hire an engineer to produce a report on the status of the underwater structure of the piece by December. Some public naysayers failed to show up or speak out this time (though two did), and perhaps more importantly, it looks like about a third of the Commission’s members are new, and it also looks to me (reading body language and between the lines), like the committee as a whole is newly interested in saving Water Theater. New figures about how much it might cost to rework the piece were discussed, none of them as threatening-sounding as the figures mentioned earlier in the year. The committee also talked about available funds for hiring a full-time collections manager/conservator. 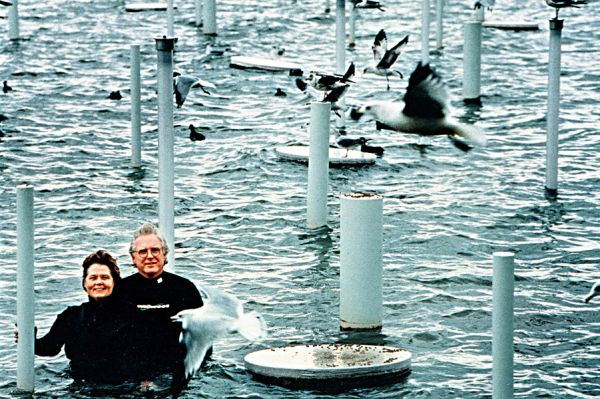 Bagley and Orr donned wetsuits and maintained the work themselves for the first five years of its life, which most cities would never expect of their commissioned artists.

But here’s what I was feeling as that section of the meeting drew to a close: 1) Dallas politicians are getting clever about public relations and image branding very quickly—even over the last nine months—because they increasingly understand that as Dallas gets bigger and showier, it’s being scrutinized more closely by everyone, and this deaccessioning thing is an avoidable blunder to keep off the national radar. And, 2) the Arts District’s influence on our politicians and press and maybe even our public is starting to show its long tail.

Granted, Water Theater is not saved yet. But publicity wise, keeping the fate of the piece open until conservation money is locked in is a smart image move for Dallas, and it looks like Bagley and Orr’s installation, even if it doesn’t survive the process, could symbolize the city’s willingness to try and fix its mistake and in the future do better by its art and artists by applying better policy. And so now, perversely, time is on Water Theater’s side.

The Public Art Committee was required to have the condition report (in this case from a diving engineer) before designating it for consideration for deaccessioning as is required under the Deaccessioning Procedures of the Cultural Policy, but the Cultural Affairs Commission still accepted their recommendation. The adopted Cultural Policy clearly specifies that “maintenance of public artworks is the responsibility of the City, not the artist”, but they are still asking the artists to help in fundraising to save the piece. And it’s strange that the City is still hearing from proponents complaining about aesthetics when the public already approved the piece before it was commissioned. So many continued violations of the Cultural Policy and Public Art Ordinance, but the City keeps putting the onus of fundraising the repair of its collection on the artists. Yes, it’s nice they found some money to document how much disrepair the Public Art Collection is in but none to actually save it. If the City had raised it’s sales tax to 8.26% they could have had an extra $300K in 2013. I don’t think many people would be opposed for paying ONE PENNY for every $100 if the increase was earmarked for conservation of the Collection. The Office of Cultural Affairs is setting bad precedent by continuing to allow the likes of (former Cultural Affairs Commissioner and current City Council candidate) Christopher Jackson to keep speaking at these meetings about how the city needs to remove art because its ugly. The guy was on the Commission complaining about it while admitting he didn’t even know it was art, let alone a piece selected by the Commission. These are supposed to be the leaders of our cultural policies, but the direction of these preceedings is not very encouraging. We’ll see what happens in February. Thanks for keeping up with this Christina!