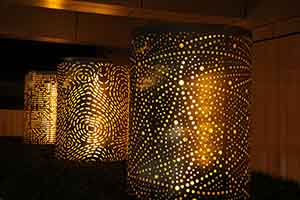 Airport art has been getting much attention lately, according to the surge of reviews and “best of” lists, such as those put out recently by The Huffington Post, The Wall Street Journal and CNN. Artists who scoff at the notion of placing work in locations where people are merely rushing from one spot to another should consider the recent installations at Dallas Love Field airport’s entrance terminal. Tom Orr’s Intersected Passage and Diana Goldberg and Julie Cohn’s Luminaria were officially unveiled just in time for last weekend’s North Texas ice-in, providing a captive audience the new artwork. On any day, airports are often the site of frustration and impatience but, for some, those waiting moments are about transition, contemplation and possibilities—not a bad state of mind for an art audience.

For Houston artists (actually, artists who live within a 300-mile radius of Houston) who might be interested in this kind of audience, the Houston Arts Alliance (on behalf of the Houston Airport System) is seeking to purchase existing artwork to be added to the City of Houston Art Collection at Bush Intercontinental Airport. They are looking for flat works and small sculptures in any media. Submissions are due on December 20.

White Rock Water Theater To Be Replaced By...

How Do Local Arts Communities Organize?