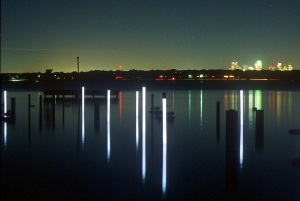 If you live in Dallas and you care about whether the city is prepared to take care of the public art work it commissions (instead of say, abandoning it to ruin or removing it when it just needs a paint job) then you might think about attending tomorrow’s Cultural Affairs Commission meeting at 4:30 pm at the Latino Cultural Center.

At the spiritual center of this meeting (so to speak) is the fate of artists Frances Bagley and Tom Orr’s “Wildlife Water Theater,” a really nice piece at White Rock Lake that plays well with the water and the wild bird population, installed in 2001. Earlier this year the Commission, having no funds post-2009 budget cuts to maintain the artworks it commissions, proposed removing the installation instead of rehabbing it, to great public controversy.

The issue was tabled after the brouhaha, and now it’s being revisited in tomorrow’s meeting, when, per D Magazine’s Frontburner: “…commissioners will vote on allocating funds to study the needs of the collection and possibly hiring a conservation manager to implement that review.” Supporters of Bagley and Orr’s work and the general health of Dallas’ public work are encouraged to attend by a group called “Save the White Rock Lake Water Theater.”

Again, the meeting takes place tomorrow, which is Thursday, October 16, at 4:30 p.m. at the Latino Cultural Center in Dallas, 2600 Live Oak Street.