I always forget what happens to me when I drive into West Texas. It must be all the summer vacations I spent in Odessa when my dad was living there and I would play outside in the dried-up buffalo wallow from sunup to sundown, but I love that part of the state. Not Odessa so much as the climate and scrubby land, though “Friday Night Lights” figures heavily in my romantic notion of that part of the world.

As I drive south from Midland-Odessa and nearer to Alpine, the landscape knocks me sideways; it’s not nearly as showy as the Rockies of course, but there’s a relaxed, lovely, worn-in wonder of what Michael Pollan terms “refuge and prospect,” which is what human souls look for out there on this harsh planet. West Texas is plenty harsh in its climate, but that dry heat feels great on the skin. The red rock in the sunset makes me cry, especially of I’m listening to Emmylou on the car stereo on the way in. 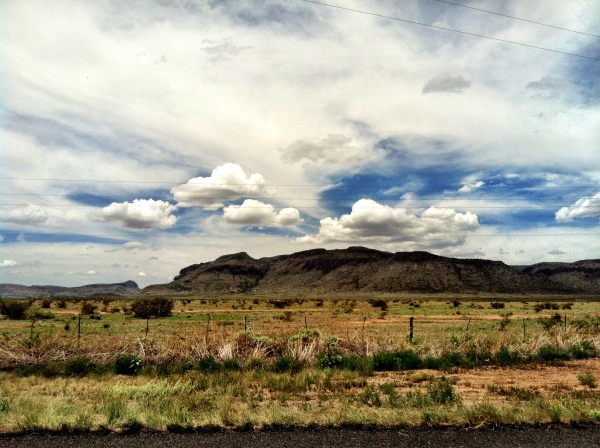 Chinati Weekend in Marfa has been an annual event for years, and the Chinati Foundation, which this year features artist Larry Bell, is the soul of Marfa’s emergence as an art destination and causes the whole town to open itself up for visitors. The artists who live here open their studios, the other foundations and art spaces put on their best shows, and the shops and restaurants go all in. The hotels in Marfa and Alpine get booked up. Hipsters and collectors from near and far descend and expect to be entertained. 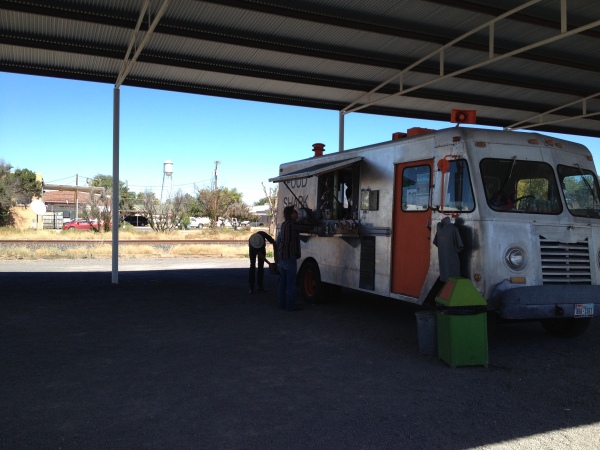 I’ve been to Marfa a handful of times, though never on business and never during Chinati Weekend, and for this trip I’m staying right in the middle of town, so I was happy to start wandering early. As of noon of Friday, the town was still shaking itself awake: Food Shark and Comida Futura and Squeeze were weirdly quiet (I benefitted as usual with a Marfalafel) and the most of the galleries I stopped into were still installing. Ladders, tool carts, boxes of lights: the whole shebang of install indicators. The casual pace reminds me more of Los Angeles than New York, though we could just call it Marfa Time. When I talked my way into a few spots still putting up vinyl letters, I didn’t feel right about snapping pics, so I knew I’d have to hit them again in the evening. 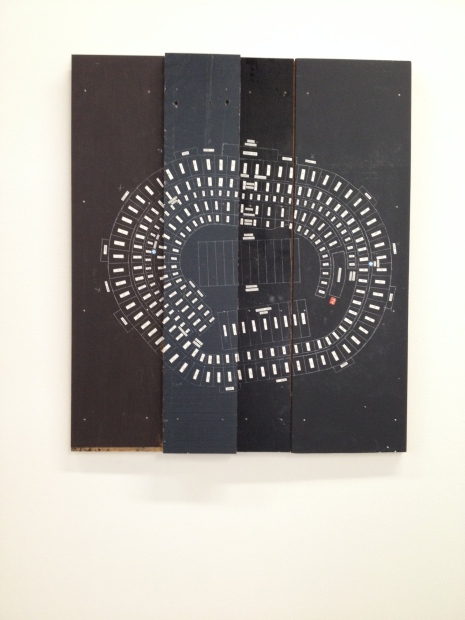 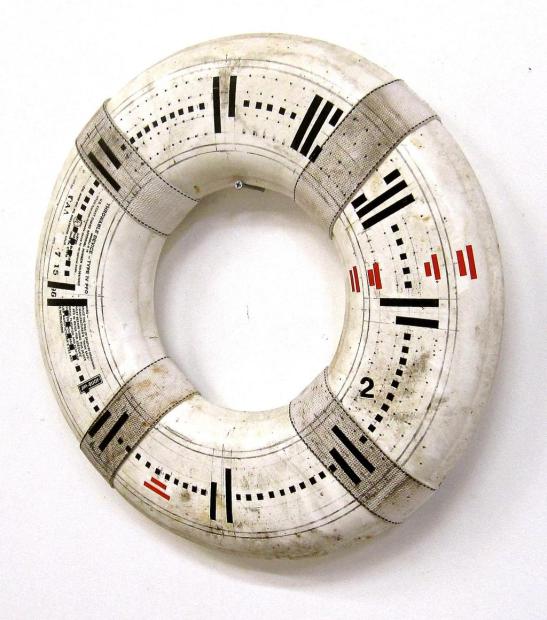 But even at noon, Eugene Binder’s space—hosting a pop-up of LA’s the Hammer Museum’s Dosa Mercantile in the front and an exhibition in the back—was up and ready for crowds, with a good clean show by Greg Colson that I enjoyed.  The veteran artist is clearly obsessed with the engineering of sporting events and grid-making, and finding ways to intersect the two, and his charts and maps have a profoundly geeky honesty, with a lot of textural presence that I engage with easily. It was a good start to my day, because some of the other open galleries were showing what seem to be vanity shows by their owners or just sort of shallow, gestural pastel abstraction a la Santa Fe. (I do wonder if, as in Santa Fe, a number of amateur artists with too much time and money on their hands settle part-time in Marfa and expect too much.) 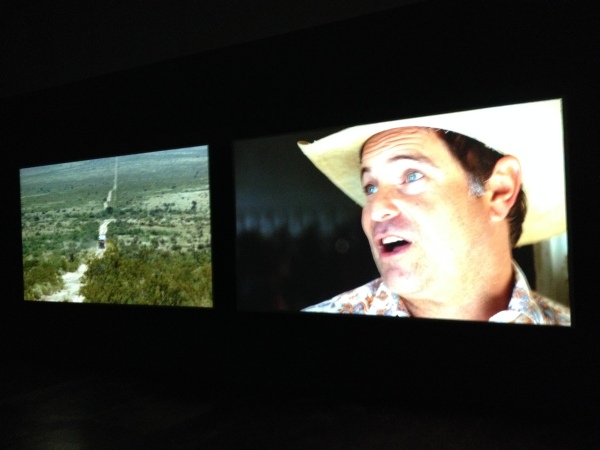 But Ballroom Marfa was totally ready, too, with a big show of videos by Hubbard and Birchler. I stopped in to watch for a bit and promised to return, because I love Hubbard and Birchler’s work, and my gosh, it looks and feels absolutely perfect out here. Perhaps prematurely but probably not, I told Ballroom’s music director that it would likely be my favorite show of the weekend, and I suddenly hated that my husband wasn’t with me to soak it all up.

The still-newish Marfa Contemporary is showing work by Brooklyn artist Spencer Finch in a show he calls Ulysses, after Joyce. You can read about the concept behind the show here. The colors were up and hand-labeled in pencil, but the ubiquitous tool cart was out in the middle of the room and the vinyl yet to be installed, so I looked around and quietly slipped in and out of the space; no one was looking, so I snapped a couple of pics. 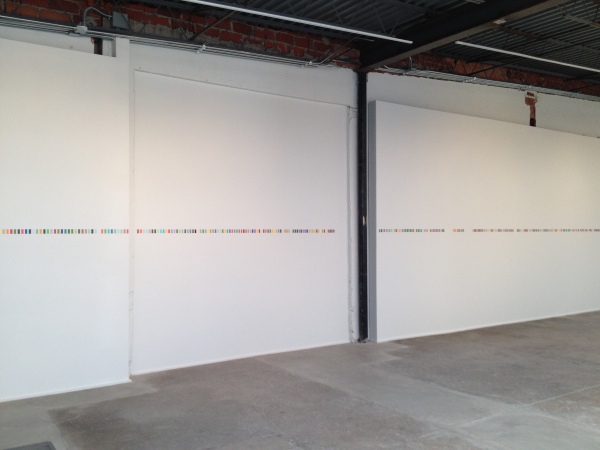 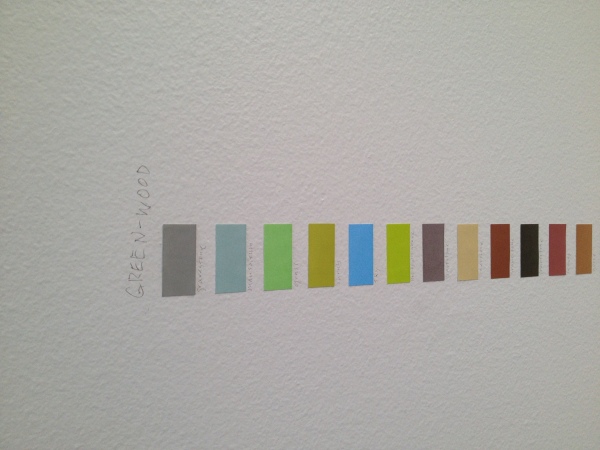 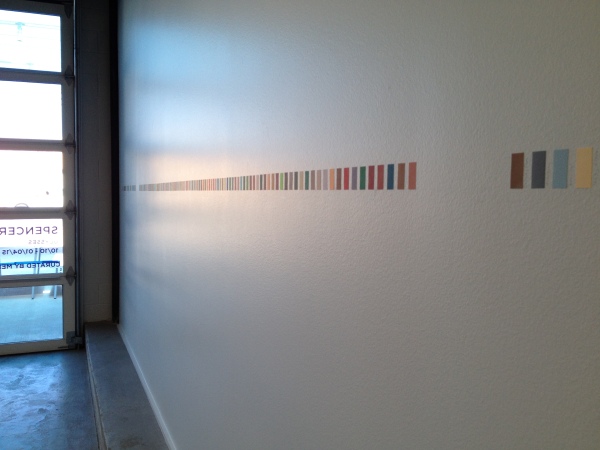 The “Made in Marfa” open houses started at five, so I ventured out again at five on the dot and got to Leslie Wilkes’ studio first. Her studio is behind her house and feels good with its gardens and sunshine, and at 5:05 p.m. she was already engaged with some serious-sounding collectors (some of these paintings were in her recent Women and Their Work show in Austin) so I admired her color palette and took a few photos. 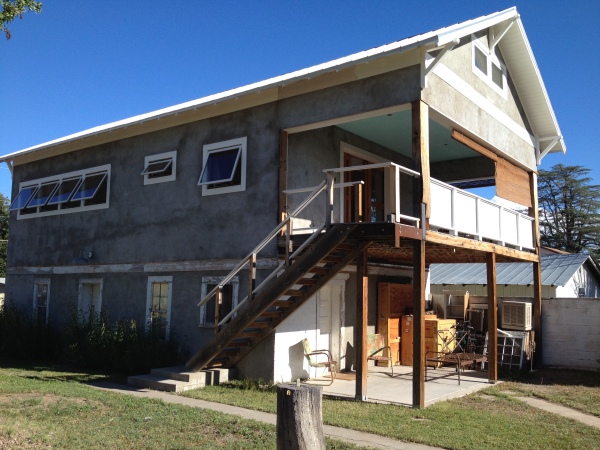 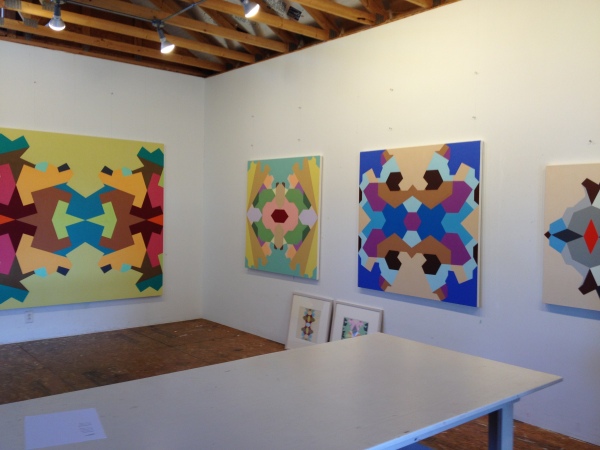 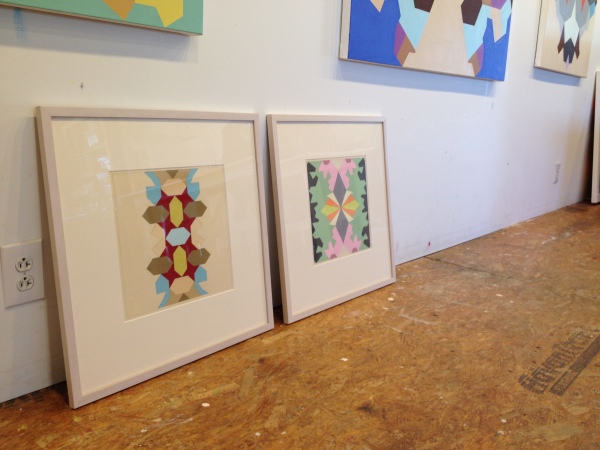 On the way back into the center of town, along the west side of Highland Avenue, there were pop-up galleries and a few stores showcasing some crafts, and I looked into all of them but nothing jumped out at me. I went back to the Contemporary and Marfa to find my friends who were in town from London. Two of us split off to check out the jewelry store Freda and its trunk show of pieces by Unearthen, because we are human and easily distracted by shiny things. My friend and I tried to decide which of us might buy the pendant etched with a delicate upside-down bat. I am constantly worried about the welfare of our bat populations. 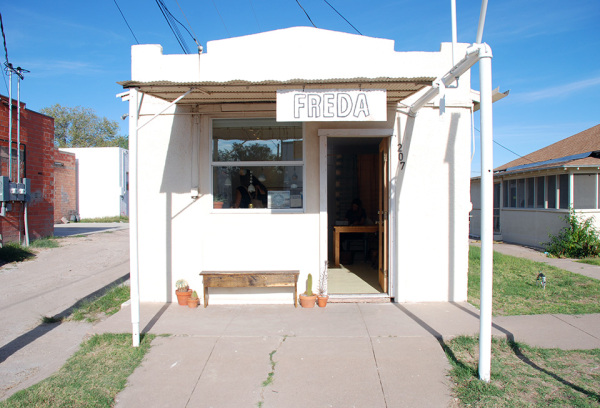 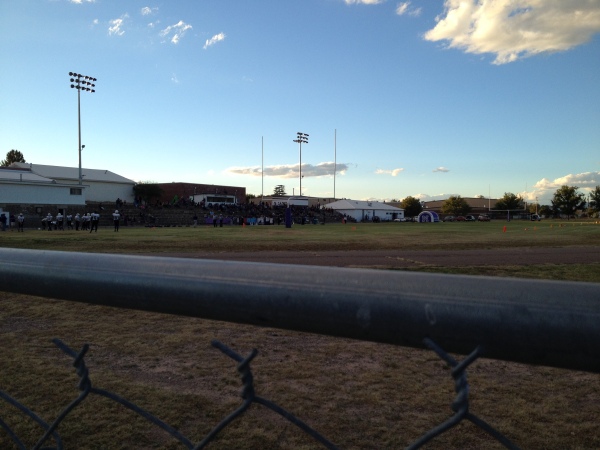 As I wandered: Marfa ISD Homecoming! The game hadn’t started yet.

Then I left to wander to the Lumber Yard compound, and found Austin-based (and Chinati weekend veteran) Jason Archer showcasing two bodies of his work. His print editions are funny and light and good for people looking to buy something very Texan/Marfan while here. In the next barn-like room was a decidedly unfunny video projected big on a wall (the sun was still up so it would snap into better focus later) (by an artist I’m trying now to find the name of) about industrial pig farming and meat production in China. An art video only in the way it was edited—sort of collage style—but nonetheless pretty gripping and horrific. I told some other viewers that it’s scarier than the grimmest slasher flick (which by the way is the original Texas Chainsaw Massacre). 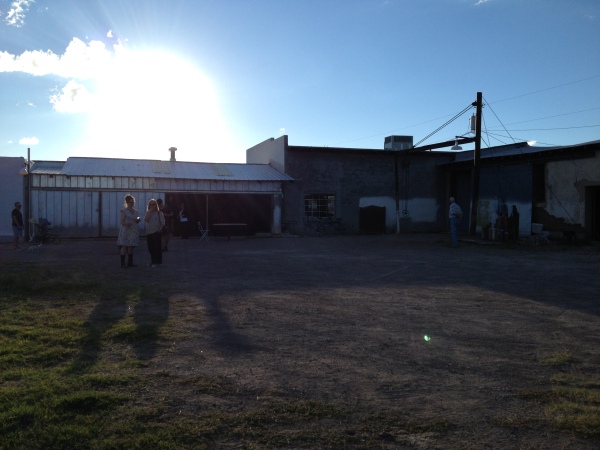 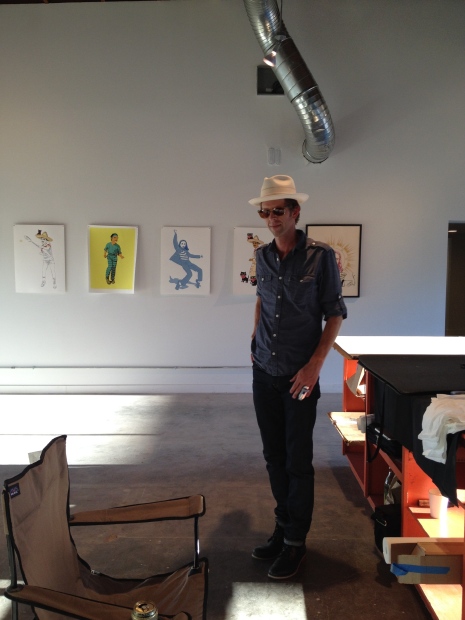 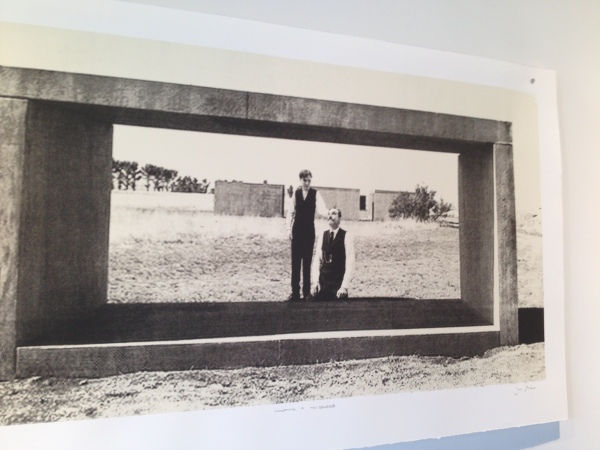 Jason Archer reimagines There Will Be Blood 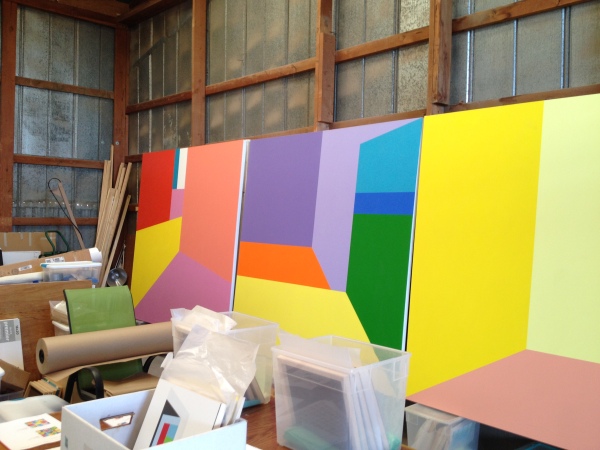 I stopped in next door at Martha Hughes’ open studio as well. Her work is pleasantly bold geometric abstraction on large and small canvases, and she, too, was reassuringly busy with collectors. 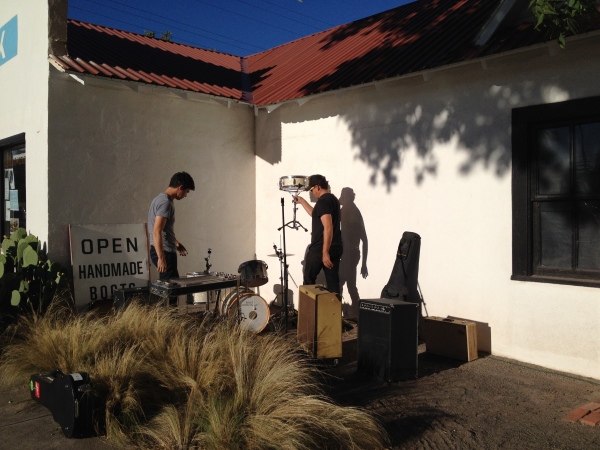 A common kind of venue for showcasing art, video and music during Chinati Weekend are the boutiques around town. Cobra Rock is the boot-making storefront in Marfa (the boots are indeed beautifully made) and they were hosting a local band called Hotel Brotherhood, and this little outdoor performance had come highly recommended by a real Marfa person. So I waited while they set up, and talked to the bass player about when they would start, and stood through the great and too-brief sound check, and then I had to leave to attend a private dinner in the courtyard of the Hotel Pasiano. I was ridiculously disappointed I couldn’t stay for the set. All those tube amps sounded amazing in the clear, thin air.

Tomorrow: a recap of Saturday.

Here’s Your Schedule for Chinati Weekend 2018

Great to see Artist/Architect, Gail Peter Borden effect (chinati resident 2004 ) in Martha’s work, a few of Borden’s pieces at our satellite gallery (Galleri Urbane in Marfa since 2002)now located at the Thunderbird in the exhibiton lounge .
Ree