The Chinati Foundation in Marfa has announced that its 2018 Chinati Weekend will run from Friday, October 5 to Sunday, October 7. The annual celebration, which began as a fundraiser for the foundation, has grown steadily and nowadays includes open studios by local artists, public concerts, performances, and special art viewing events throughout the small West Texas town. The performance aspect of the weekend has been steadily growing since its early years, featuring notable performers like Chromeo (who performed a DJ set), Yo La Tengo, Sonic Youth, and perhaps most famously, Solange Knowles. 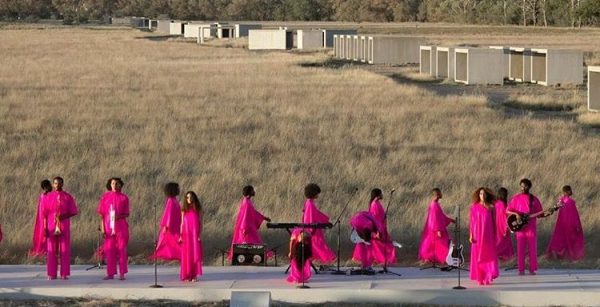 Solange Knowles performing at the Chinati Foundation in Marfa, Texas, 2017

While many of the musical performances have taken up residence in different spaces around town, Knowles’ was the most connected with the foundation; she performed in front of Donald Judd’s concrete works, using them as a sort of backdrop for her stage set. You can read about that performance here.

This year’s festivities, in addition to open studios by Marfa artists and a show of works by Michael Williams, one of the foundation’s artists-in-residence, will include a performance by musician Rosanne Cash, the eldest daughter of Johnny Cash. The concert is set for 9PM on Saturday, October 6th, on the town’s main drag, in front of the Presidio County Courthouse.

This year’s Chinati Weekend will also feature performances of Richard Maxwell’s Ads, a theater piece first performed in 2010 at Performance Space 122 in New York. To create this iteration of Ads, Maxwell is preparing a portion of Chinati’s Ice Plant building for the performance, which will include “approximately thirty members of the local community, who will share deeply held beliefs that become the text and subject of the work.” This new version of Ads will be strongly influenced by Marfa’s art and culture, as the Chinati Foundation explains:

“Ads will be highly localized in its Marfa iteration—drawing on the thoughts, beliefs, and talents of the town’s citizens; utilizing in its staging discarded materials from the construction of Donald Judd’s 15 untitled outdoor works in concrete; and activating a section of the historic Ice Plant building that has remained empty for decades.”

There will be five performances of Ads during Chinati Weekend. Reservations are available on a first-come-first-serve basis.

International Creatives to Participate in Marfa Residency this...