Saturday of Chinati Weekend is more formalized in its scheduling than Friday’s “Made in Marfa” wandering, open-house affair. The galleries and some of the artists’ studios are still open through the day, but mostly Saturday is known for the lectures at the Crowley Theater, the big private charity dinner at Chinati proper in the evening, and the concert back in the middle of town afterward (this year’s band was Polyphonic Spree, who played at the Capri).

One thing I’ve heard a lot about is that the whole weekend is a much calmer event now than it was a few years ago. By some accounts, the year Sonic Youth played, 2007, was the year Chinati Weekend reached a kind of critical mass that spooked the locals and turned off the regulars. The organizers have since pared things down and regimented the schedule in such a way as to discourage that kind of Coachella Festival mob from coming in to gawk and freeload on the town and the hospitality of the hosts.

I wasn’t here back then, and all I know now is that Chinati Weekend feels entirely manageable and relaxed, with moveable little crowds going here and there and sometimes congregating but not in an urgent, claustrophobic way. This is good; the setting doesn’t seem suited to anything heavier-going than that.

I started my day at Julie Speed’s studio on the edge of town, right next to Chinati. She has a whole compound of interconnected rooms around an open-sided courtyard. Whatever you think of her work (she is a Texas mainstay, after all), she’s admittedly got a sweet set up and a spectacular view, and she keeps it open all weekend, which is generous. 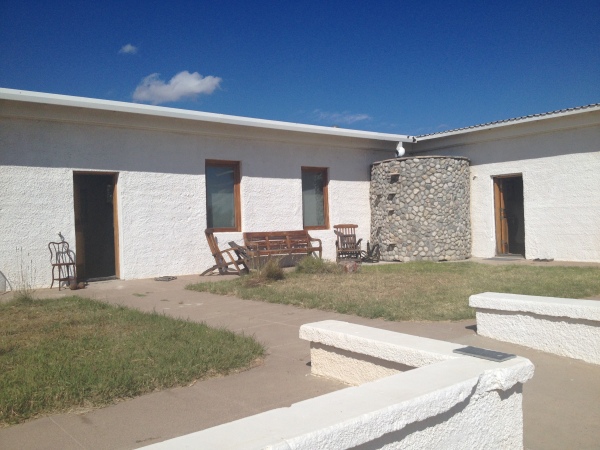 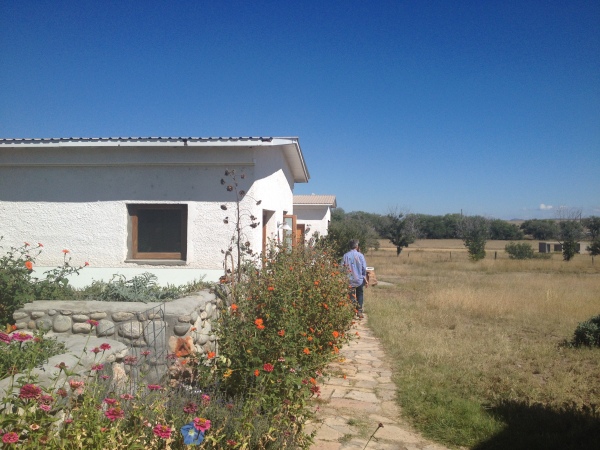 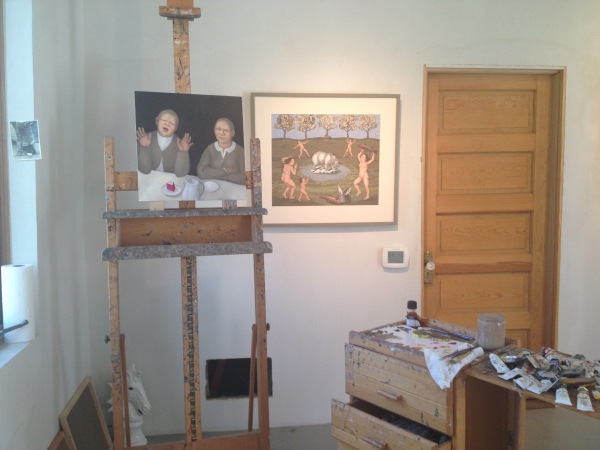 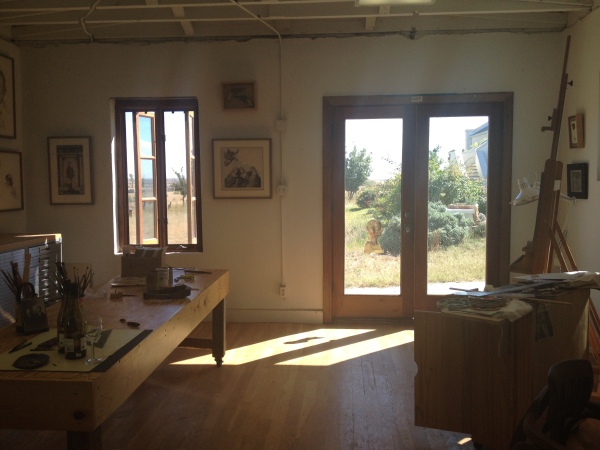 On the way back into the center of town, I stopped into a gallery called Exhibitions 2D. This was probably my favorite gallery space and one of my favorite buildings on the trip; it’s a good old high-ceilinged Marfa bungalow, transformed into a lovely set of whitewashed rooms for showcasing work. The three main exhibition rooms held a group show, and the installation of the work throughout was inventive and charming. I wanted to move right in. 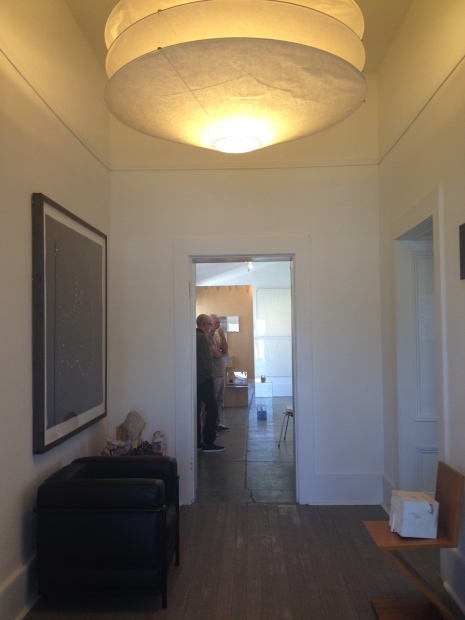 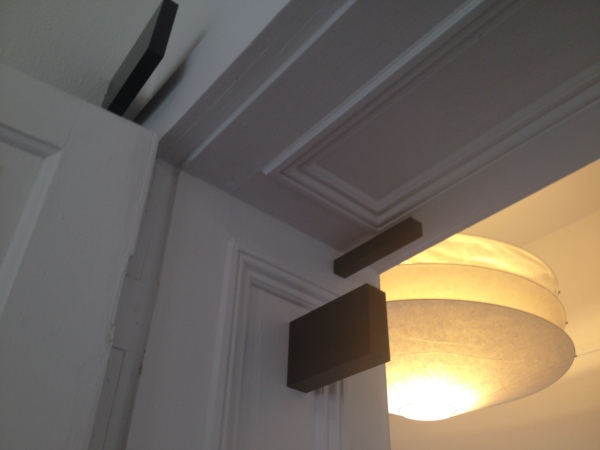 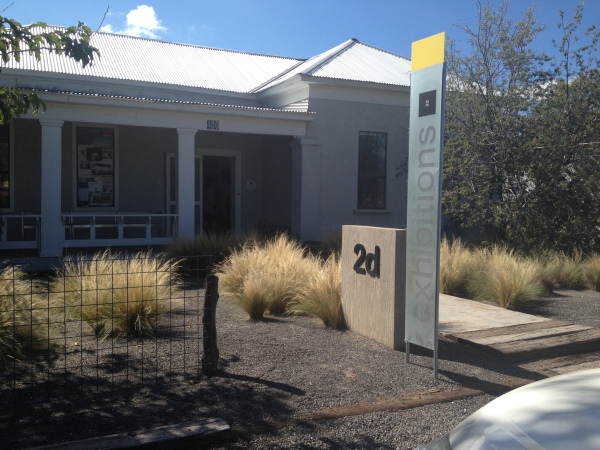 Back at the Marfa Book Company, which hosted events all weekend, I looked into its gallery space which was hosting a show of photographs by Alex Marks. He’s a Marfa artist, and here he’s photographed desert and livestock scenes using very long exposures at night and by the light of the full moon, giving them an otherworldly quality. I’ve certainly noticed a “go with the flow” attitude for Chinati Weekend in not fighting all the artists’ love and regard for the local landscape. I, too, went with the flow and leaned right into the photos (so to speak). 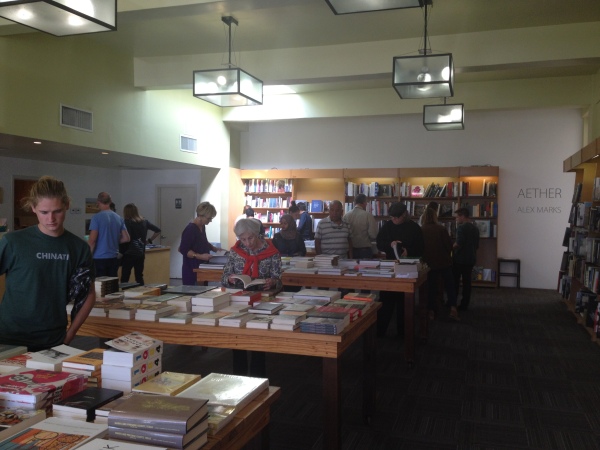 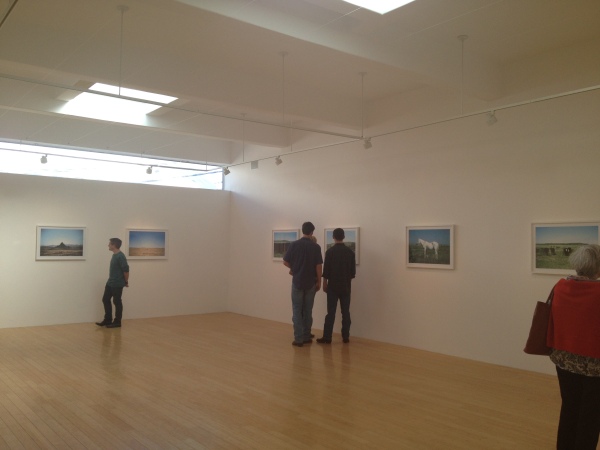 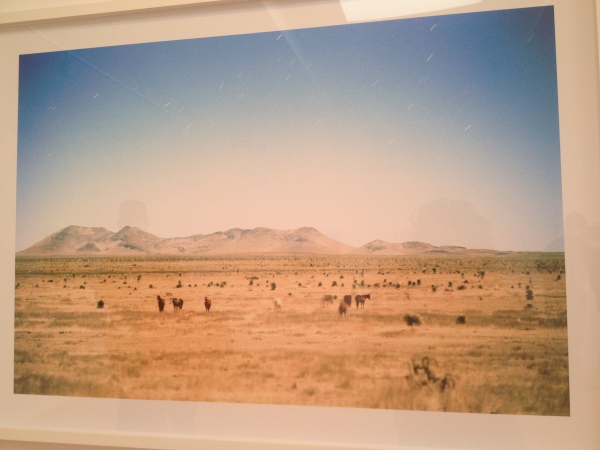 The Larry Bell talk at the Crowley Theater that afternoon pulled the biggest crowd of the weekend so far. We all packed in and I was there with Terri Thornton and we sat on the aisle steps not far from the stage. Before the talk started Terri got into a conversation with the man sitting right behind me (I was kind of sitting on his shoes, in fact, because that’s how crowded it was) and they clearly knew one another. They were agreeing about how great his installation looked at Chinati and then Terri turned to me and said, “Christina, do you know Bob Irwin?” I do now. So I continued to awkwardly sit halfway on Robert Irwin’s shoes through the talk. I was too shy at this point to apologize.

The talk itself was maybe a lost opportunity, though the engineering folks in the audience could only have been thrilled. Marianne Stockebrand, curator/Ingrid Bergman doppleganger was hosting the discussion and, like a good dignified academic, seemed endlessly fascinated with Bell’s process rather than his social history in the art world (an introductory video showing Bell in the 1960s-‘80s was full of such promise). So the two of them spent the hour vivisecting the particulars of the coating he uses on his glass, the evaporating machines and light filaments and machinations of his studio, and what it means to install on a floor that isn’t level. Bell has a good dry delivery of one-liners, though, and his speaking voice sounds exactly like Johnny Cash’s minus the Arkansas accent.

(I have to admit also that being indoors when the weather is this sublime makes me want to chew off my own arm.) 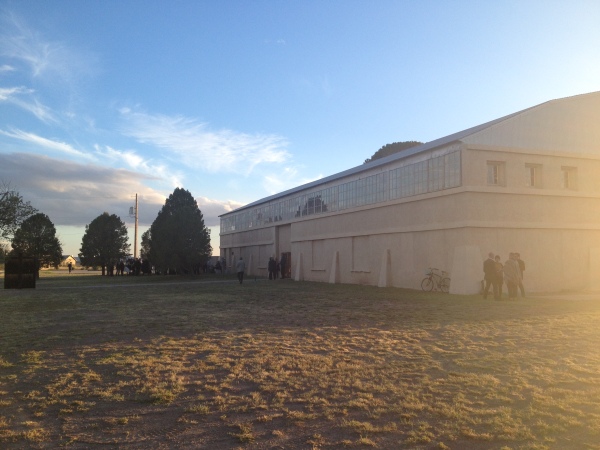 The Arena before the dinner

That evening I put on some nicer clothes and went out to Chinati for the cocktail hour preceding the dinner itself. This is basically the TWOxTWO of Marfa, for those who get the reference, and  there I finally met Marfa legends Tim Crowley and Buck Johnston, et al. It was outdoors at the Judd Arena and extremely pleasant and everyone looked great in their Texas-chic get ups; it’s entirely genuine and not some thematic put on. Cowboy boots really work out here. I wasn’t part of the dinner, so I got back into town and met up with my London friends and we ate outside, and I am here very happy to report that my friend bought the bat pendant. Here it is (it’s actually tiny): 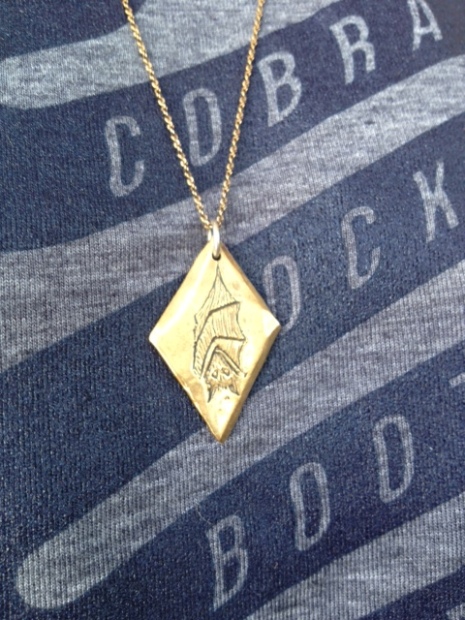 After dinner my friends piled into a car to go see the Marfa lights. I passed on it and told them “good luck” but then this morning I heard the lights were super active! So that worked out for them. I skipped the Polyphonic Spree (no regrets) and instead went on to Gene Binder’s late-night tequila party at his gallery, where I ran into a slew of Dallas people including John Pomara and Greg Metz. When I left around 11:45, there was an impromptu dance party forming in the alley outside his space. The kids were dancing to Madonna. 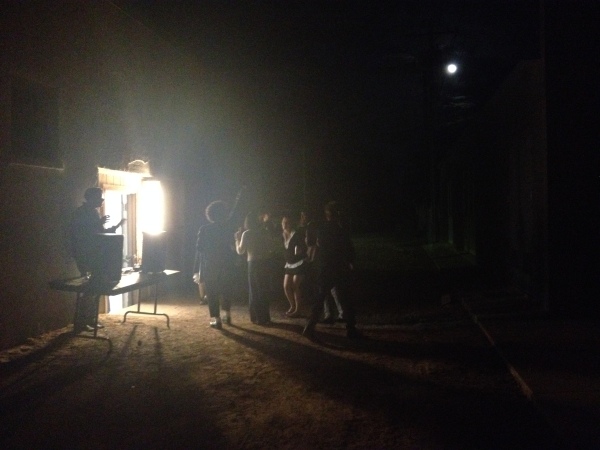 Correction: The work throughout Exhibitions 2D was a group exhibition, rather than a solo show by John Robert Craft in the front rooms and a group show in the middle room. The doorway shot is work by Susan York.

Reading like “Garden and Gun” makes it accurate reporting. G&G depicts the South as almost completely populated by affluent and/or hipster white people. Rural southern poverty and African American culture are largely ignored or selectively used as background decor. Meanwhile, the Marfa artworld is similarly dominated by wealthy and/or artsy white people. In reality, Marfa is more than 60% Hispanic with 20% of its population living below the poverty line. But poverty viewed from a distance, whether covered in kudzu or windswept and arid is so aesthetically pleasing…

And the biggest employer is not art or even tourism/hospitality (17.9%), but government (24%).

Boyd you are the best

Chinati Weekend has changed drastically over the nine years I have lived and operated inde/jacobs in Marfa. What used to be spread over three days – the official events – now all (almost) happen on Saturday. Thus, people who have been coming to the event for years say that they feel like cattle being herded from one event to the next. Of course the “fast” pace may seem relaxed and casual to big-city folk who run around at art-fairs, but the vibe is no longer relaxed in the Marfa sense. Although there are reasons to criticize and revise the Chinati weekends of the past, the full three-day event is now cut in half. Some may need to jet in and get out quick, but their is far less time to socialize, to see the art, etc. I say this because I have had several out-of-towners yearn for the olden days. There is no right answer for this event – but while some like it short and sweet, others like a more relaxed atmosphere.

You’re two years off on the Sonic Youth show. They played the weekend in 2007.

Thank you. I will correct it.

Just to clarify (as an artist that shows at the space). All of the rooms at exhibitions 2d contain works by multiple artist, usually 3-4 per room. There has only ever been one solo show at the space many years ago by Susan York. Also the caption below the image of the cube forms credits John Robert Craft when in fact it is Susan York’s work.