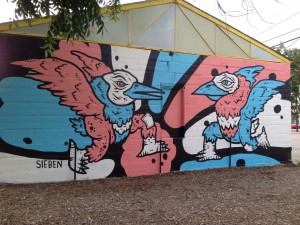 Michael Sieben, an artist and co-founder of Austin’s Okay Mountain collective as well as an acclaimed graphic designer and illustrator, was recently commissioned by the Dallas Contemporary to create a mural for the growing and thriving Trinity Groves neighborhood just south of downtown Dallas. The Austin-based artist, who wrapped up a residency and solo exhibition at the University of Texas’ Visual Art Center in Austin just last spring, is a busy, busy man as an editor of the national skate rag Thrasher when he’s not working on campaigns for such heavy hitters as Adidas and Vans.

Sieben, assisted by Austin-based designer Josh Row, finished the mural at 354 Singleton Boulevard on Wednesday. The piece, which depicts two thunderbirds/birds of prey in Sieben’s distinctive style, is on the side of an unassuming building near the Calatrava bridge entrance to Trinity Groves– an area that has in the last few years blown up with restaurants, warehouse art spaces, artist studios, bars and the like. Kudos to the Contemporary and Sieben for the initiative; it’s a welcome symbol of the continued spread of Dallas’ art and culture scene.