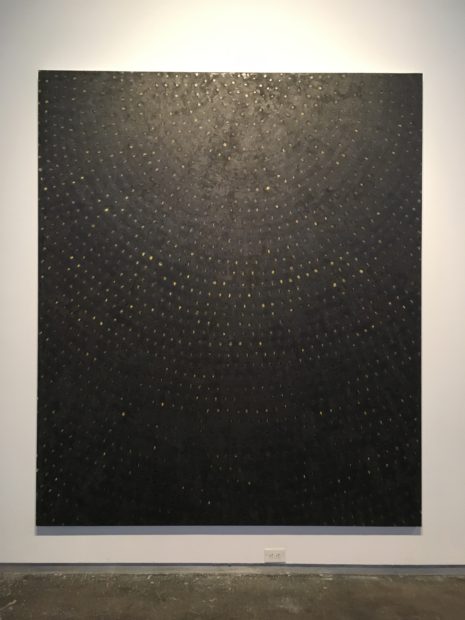 The Ross Bleckner show at the Dallas Contemporary is a bit of head-scratcher at first, but I was happy to see it when it first opened. A week ago I gushed a bit on video about his painting surfaces and his color, but I went back to see the show today and I realize that the source of my enthusiasm was misplaced (his success with surfaces and color is wildly inconsistent). But I’m still responsive to the show. I think circa-2017 Bleckner is a good fit for the Contemporary—in tone, content, and visibility. I don’t know where else in Texas I’d catch a show of Bleckner’s recent paintings. This teaming up is kind of a Sure, why not? proposition. 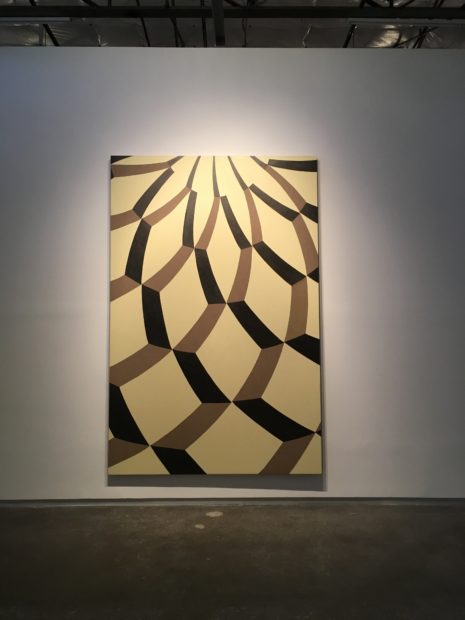 It’s a big show, and for it Bleckner has mostly trawled back through his own bodies of work in a kind of therapeutic revisitation/reconsideration, and made new paintings inspired directly by the older ones. So some of these new paintings look (recognizably) like his abstract work in the ‘80s and ‘90s, when he made the scene in downtown New York and his peers were Julian Schnabel, David Salle, Eric Fischl and Peter Halley. Some of the paintings call back to his work the early aughts, or, in the case of the flower paintings, as recently as the last decade. And the landscape paintings are new. I don’t know that Bleckner’s paintings from one Bleckner era correlate with his work from another in a way that creates a Bleckner ‘signature’ over the span of his career (thus far). But the Contemporary show doesn’t strike me as disjointed, either, perhaps mainly because all of these works—whether big crisp op-art canvases, or small blurred flying birds, or horizontally brushed-through landscapes—all came out of the same studio at roughly the same time. And while visually unconnected, something in their presence gives me a more rounded sense of Blecker himself, and I think that’s a worthy goal for artist who might want to pause for a minute before figuring out where he wants to go next. It’s almost like a pro athlete going back over all his game tapes to better understand his own evolution. If it’s merely a self-improvement strategy, or even a bit of a gimmick, I’m happy to go along with it. 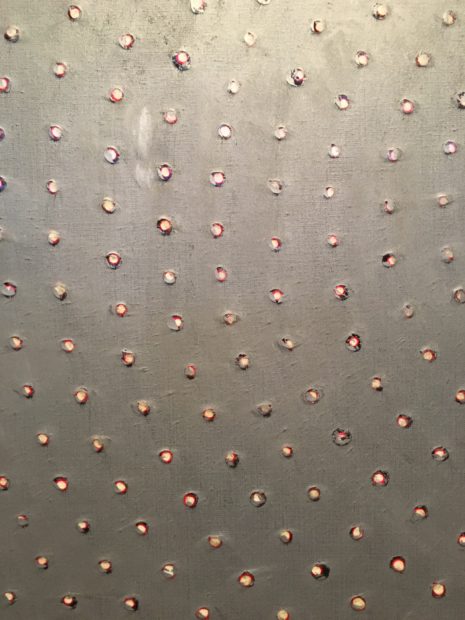 Some of the paintings I flat-out love. The dome/sky architecture paintings, which are oil on canvas, are of the type he was doing in the late ‘80s during the height of the AIDS crisis, and these new versions are equally fantastic. The radiating celestial patterns pulse off the canvas, the underpainting coming through these countless abstract little ‘stars’ is beguiling, and the surface is as seductively burnished as pure graphite. I almost can’t imagine a single setting where they wouldn’t look great while holding onto their pathos. 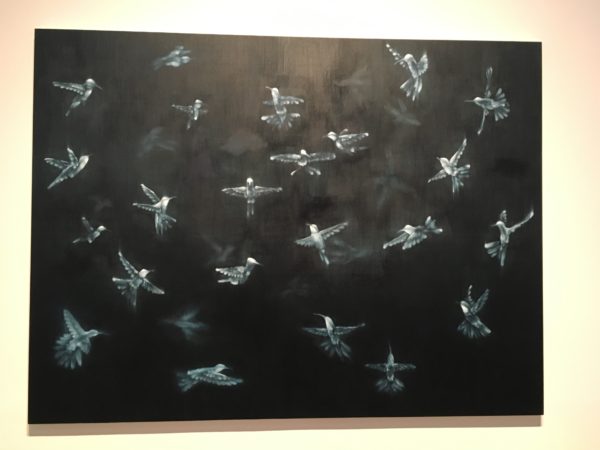 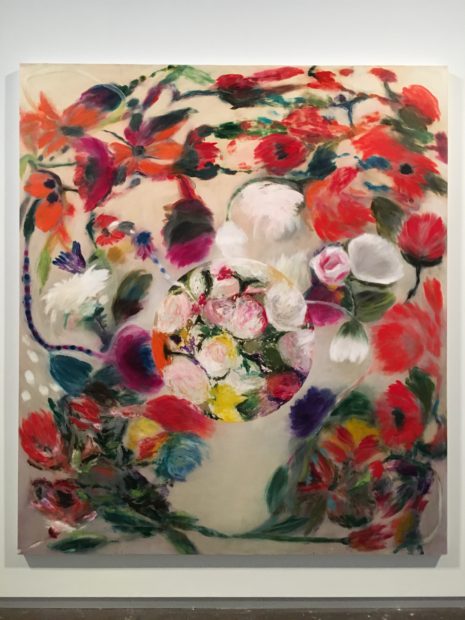 The bird paintings I like, too, because here Bleckner’s studied version of off-handed brushiness is in service to the sense of whirring, winged motion, like watching a hummingbird hover in place. The same brushiness applied to his flower paintings sometimes works and sometimes feels like a bad pastiche of Monet. But a few of the flower paintings are my favorites in the whole show. So when they do work (and recall a bit of Renoir instead), here’s why: In them, Bleckner is (I believe) earnestly seeking a kind of sublime beauty, and sometimes he lands on it because this search can be extreme and lead to something arch, or even decorative and camp, but that doesn’t necessarily rob it of beauty—it can in fact imbue it with a surprising decadence that makes it even more luxurious and strange. 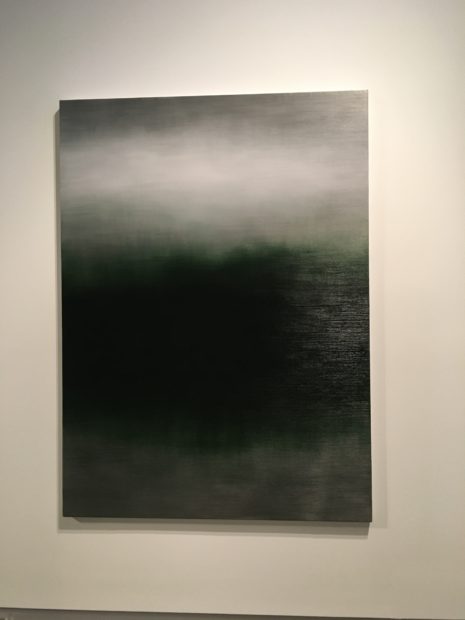 The landscape paintings at the back of the space don’t call back to earlier Bleckner work; they’re wholly new. They’re also the most unconvincing works in the show. In a nod to both Richter and Rothko, Bleckner has created a hazy, abstracted delineation of shapes that refer to foreground and background, earth and sky. The colors are dark and corrosive, and in each of these works, the surface is evened out by an assertive horizontal brush sweep, almost giving the landscape a sense of being viewed through the window of a bullet train. But the effect is jarring, and the heavy gloss of the paint itself is cloying, as though Bleckner came back in to give the surface a sickening film of completely unnecessary varnish.

Nonetheless, the title of the show—Find a peaceful place where you can make plans for the future—is apt. As a whole, the show is both charming and serious, with a lot of room to stretch out between Bleckner epochs and enough personality to coax you through. If retracing his own old paths was painful or awkward or a grind for Bleckner, it doesn’t show. It just feels like he’s stacked up his own years of experience to create a springboard for his next move.

Through March 12 at the Dallas Contemporary.

Good review. I think the key word is inconsistent. The work could have been done by three or four painters and I didn’t think it ‘hung together’ very well. The purpleish one with concentric circles is wonderful. It has a very thick, brushed paint application that is iridescent. By far, my favorite.