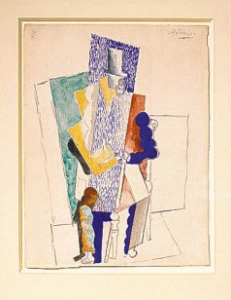 There are still ten days to purchase a lottery ticket to win the 1914 painting by Pablo Picasso, Man in the Opera Hat, estimated to be worth $1 million. The artist’s grandson, Olivier Picasso, has organized an online charity raffle to benefit the rebuilding of the historic city of Tyre, Lebanon, an ancient Phoenician city with sites such as the Roman Hippodrome, which appears on UNESCO’s list of World Heritage Sites. 50,000 tickets were made available for €100 each (about $135); 40,000 have already sold.

According to the New York Daily News, an unnamed “modern art lover from Dallas” attempted to buy the remaining raffle tickets, which would have run “him” (the article specifies gender, but that’s all they’re giving up so far) about $1,350,000. “He” may know something that others don’t about the true value of the work, but much less about how properly functioning cyber sales sites work— the raffle is restricted to 50 tickets per purchaser, so the online system rejected him. “It’s unfair to the other people,” said the project coordinator. “If you buy 20 percent of the tickets, it makes the chances of winning uneven.”

Peri Cochin, a journalist and television producer in Paris, came up with the idea when she and her mother were planning fundraising events for the Tyre reconstruction. In order to avoid yet another gala dinner, Cochin and her friend Olivier Picasso came up with the idea of an online raffle. Cochin told NPR that it was created to involve more than the usual suspects of gala-goers: “It’s mostly [for] people that are dreaming of something that is not possible to get,” she says, “and, all of a sudden, yes, you can maybe have it.”

At one in 50,000, the odds are actually much better than most convenience store lottery tickets, and the funds go to restoring an important historical site. $135 is a bit much for a stocking stuffer, but there’s the reassuring fact that the organizers insisted on keeping a level playing field, it all goes to a good cause, and there’s just a tiny chance of a serious Picasso hanging above those stockings on the mantel. The official raffle drawing will take place on December 18 at Sotheby’s in Paris.

12-16-13 Just heard about this for the first time. Are tickets still available? Where to buy? HELP, HELP.
Thanks, Karin