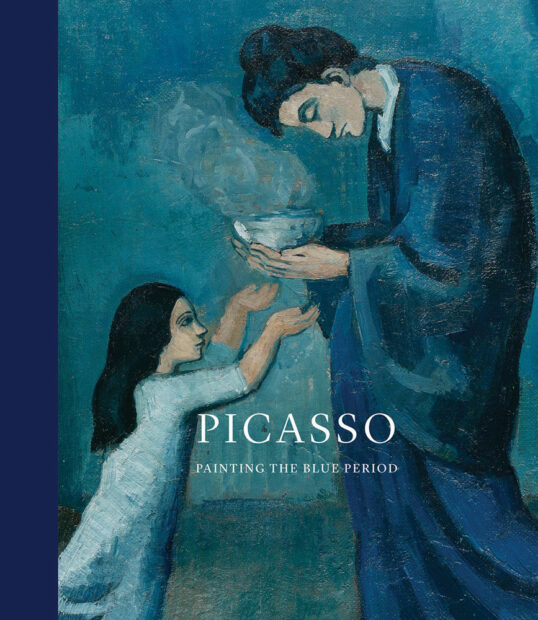 In the spring of 1901, Pablo Picasso moved into a studio apartment in Paris, sharing it with Catalan art dealer Pere Mañach. Although Picasso had previously painted in Paris – creating works that were showy, colorful scenes of the city’s life – his arrival in 1901 marked a turn in his art toward his use of monochrome and muted colors. This time became widely known as his Blue Period.

Traditionally, art history has placed a considerable emphasis on a biographical approach to understanding Picasso and his work, primarily by trying to identify his painted figures – particularly his women – as a way to make sense of his own social, personal network. In Picasso: Painting the Blue Period ­– a collaboration between The Phillips Collection and the Art Gallery of Ontario – art historians, curators, and conservators have found a different way to dig deeper into the social archaeology of Picasso’s paintings. Focusing on three of Picasso’s major Blue Period works, the collaboration utilized a raft of technical analyses to literally look below the paintings’ visible surfaces.

By combining a litany of technical analyses with extensive art historical commentary, Picasso: Painting the Blue Period offers a brilliant synthesis of science, art, and history to communicate a more nuanced and contextualized understanding of Picasso’s Blue Period, which lasted from 1901 to 1904. (The technologies employed by the book’s authors include x-radiography, imaging spectroscopy, visible and infrared reflectance imaging, infrared transmission, macro x-ray fluorescence scanning, and paint sample analysis.) An exhibition organized around this research was recently on view at the Art Gallery of Ontario, and will travel to The Phillips Collection later this year.

The show and book both focus on three specific paintings – The Blue Room (Paris, 1901, The Phillips Collection), Crouching Beggarwoman (La Miséreuse accroupie) (Barcelona, 1902 Art Gallery of Ontario), and The Soup (Barcelona, 1903; Art Gallery of Ontario) – and also highlight over 100 other objects from Picasso and from other painters he studied from fifteen countries. The three main Blue Period paintings were created on recycled canvases; as such, they offer a way to understand how Picasso was refining his own techniques and practices early on in his career. Although it’s well-known that artists reuse canvases and materials for any number of reasons (cost, for example), there remains a fascination in the museum and research world with peeking below the surface of a work to see what it was in its former life.

This scholarly approach to Picasso emphasizes process and iteration – it helps audiences consider how paintings evolve in active, dynamic ways as they are being painted. In short, it helps viewers understand the artistic process. “For the discerning eye (and perhaps for his own pleasure), Picasso left clues in these works about his creative process,” Patricia Favero and Sandra Webster-Cook outline in their chapter about moments of transition in Picasso’s work. “For instance, different colours may peek through surface paint layers or cracks, or the texture and direction of brushstrokes do not follow visible forms.”

For example, an infrared reflectance image shows a portrait of an unknown man beneath The Blue Room. (The Blue Room is painted in a landscape orientation; the previously unknown portrait was painted vertically.) The X-radiograph of Crouching Beggarwoman revealed a landscape painting underneath the begging figure, including columns of a temple in Barcelona’s famous Laberint d’Horta botanical garden. (Further study of the infrared reflectance of the painting shows how Picasso changed the position of the woman’s hand while painting.) Analyses of The Soup show a similar refinement and repainting of the mother’s fingers around the soup bowl. The demonstrates the artist’s meticulous revisions of specific details. While it’s easy to assume that Picasso “must have” had such attention to specific details, these technical analyses show how, where, and often when a painting was reworked by Picasso.

Although the technical finds detailed in the book are many, Picasso: Painting the Blue Period emphasizes that there are a plethora of ways for things to be “hidden” or obscured in Picasso’s work, well beyond what can be pulled out of scans, images, and infrared analyses. Several of the book’s brilliantly detailed chapters show Picasso in his broader social and artistic context. Specifically, chapters note how certain poses, ideas, or themes in his work were in vogue, and how other artists explored the pathos of poverty and depicted women and their children. As one example, we see Auguste Rodin’s sculpture Eve juxtaposed with the woman bathing from The Blue Room. The similarities are striking — there is more than what’s on the surface, both literally and figuratively.

“When Picasso was asked about the symbolism of La Vie, he responded: ‘It isn’t I who gave the painting that title. I did not intend to paint symbols: I simply painted images that arose in front of my eyes. It’s for other to find a hidden meaning in them,’” art historian Marylin McCully recounts in her chapter about Picasso and the meaning of his studio space. McCully drives this point further, by suggesting, “He might have added, ‘it’s for other to find the hidden images beneath the final one.’”

Picasso: Painting the Blue Period is a serious and complex project that brings together several art expertises to unpack the complexity of Picasso’s work between 1901-1904. If you’re a Picasso die-hard, or simply enjoy the new ways historians and conservators are looking at artworks, this one’s for you.