Now in its fifth year, the Houston Cinema Arts Festival can boast an impressive history of premiering big documentaries and feature films, presenting special anniversary film screenings, and hosting and honoring big-name guests such as Isabella Rossellini, John Turturro, Shirley MacLaine, Richard Linklater, Ethan Hawke, and Robert Redford. The festival’s focus on films that showcase various art forms, creative processes, and artists’ stories is a smart conceit, especially for a city whose history is richer in visual, performing, and literary arts than in cinema. Collectively, the festival’s main programming can be seen as something like Sundance-meets-TED talks, which ain’t bad, but taking in a few of the riskier program choices can make it a more exciting ride.

If you ask Artistic Director Richard Herskowitz, he’ll tell you that the real heart of the festival­–the stuff that is most interesting, unique to the HCAF, and relevant to the city’s progressive cultural landscape–is not actually its bigger name movies and star guests but its rarer, more experimental films, multimedia installations, and performative events, and the appearances by pioneering, multidisciplinary artists. Not every film festival takes seriously the moving image arts as a medium for multidisciplinary innovation and an incubator for visual culture. This area of cinematic investigation that continues to keep this festival fresh, smart, exciting, and vital is, for the most part, contained in its Cinema On The Verge section. “Verge” indicates that these are almost-but-not-quite movies–something different, pointing to the search for and emergence of new forms. Likely, to some, the section comes across as a sidebar, almost-but-not-quite in the festival. But these less definable, more boundary-crossing works are central to the spirit of the festival. They’re not the biggest draws nor guaranteed crowd-pleasers, but it’s in these programs that one finds interesting connections between various art forms, between the festival and community collaborators, and between the city and the international art world.

Jonas Mekas might be lesser-known to general audiences than other special guests at the upcoming festival, but he’s really the most important film figure in town this year, and really should be receiving some kind of lifetime achievement award for being the godfather and smiling mascot of American underground cinema for more than 50 years. The Lithuania-born Mekas co-founded Film Culture magazine and was the Village Voice’s first film critic. Beginning in the late-1950s, he was one of the first in the country to seriously investigate new avant-garde, underground, documentary, and foreign films. He co-founded the Film-makers Cooperative and Anthology Film Archives, two organizations that have greatly helped the distribution, exhibition, and restoration of off-the-beaten-path film works since the 1960s. And, of course, he has been a filmmaker, artist, and poet with awards and exhibitions around the world for just as long. The legendary underground film guru will be in attendance for a Friday afternoon screening of his recent film Sleepless Night Stories, a document of Mekas’ everyday travels through apartments, art openings, dinner parties, bars, and clubs with the likes of Marina Abromovič, Patti Smith, Yoko Ono, Louis Garrel, Björk, and others. He’ll also be in attendance Saturday evening for the opening of an exhibition of his photography and video work at Deborah Colton Gallery, and at the gallery again Sunday afternoon for a talk with Colton and open Q&A.

Experimental Queer film pioneer Barbara Hammer will be in attendance for two programs in the festival. Thursday afternoon, she’ll be presenting her films Lover Other (2006) and Maya Deren’s Sink (2011) at the HCAF’s Cinema 16 venue. Then on Friday evening, she’ll be at the Aurora Picture Show to present Witness: Palestine, a tribute to Italian filmmaker and writer Pier Paolo Pasolini inspired by her experience along the first LGBTIQ Solidarity Tour of Palestine. Also presented that evening will be Cathy Lee Crane’s film Pasolini’s Last Words and Intelletuale installation.

Among other Verge guests are New York-based artist Meredith Danluck, who will be in attendance for the Saturday screening of her de-centered, four-screen feature film experiment, North of South, West of East; San Francisco animator and musician Jeremy Rourke, who will perform live music to accompany his eclectic, handmade animated films Saturday evening; Austin-based experimental film artist Scott Stark, whose great short films will be co-presented by the Blaffer Arts Museum on Sunday afternoon; and acclaimed Colombian artist Juan Manuel Echavarría, who will be on hand Sunday afternoon for a premiere screening of his film Réquiem NN documenting the rituals of tending to and decorating the graves of unidentified victims of guerilla violence (a great installation of his related lenticular photographs will also be on view–check them out before the screening).

Come to think of it, it might not be a bad idea to skip the other festival screenings and just journey through the Verges. You’ll hip yourself to some hidden histories of cinema, witness great, new media experiments, and meet groundbreaking artists. It’d be a lot cooler if you diiiid. 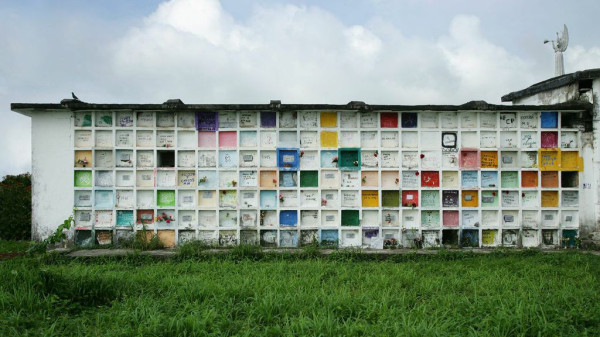 The Houston Cinema Arts Festival 2013 is happening November 6-10 at various venues. Info on Cinema On The Verge programs here.