I remember back when the Art League Houston used to be lame (There were the odd exceptions.) But for the past ten years or so, Houston’s oldest arts non-profit has been getting stronger and stronger. The ALH turned 65 this year and it is doing some of its best work yet. The past year saw, among other things, Aaron Parazette’s “FLYAWAY” wall mural; Adela Andea’s luminous courtyard installation, “Primordial Garden”; and the Robert Pruitt-curated “Stacks,” a dynamic series of five artists in five weeks. 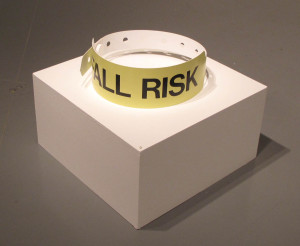 Right now the organization is presenting work by, as well as honoring, some outstanding Texas artists. “Tracing Our Pilgrimage” features the work of Kermit Oliver, the recipient of the ALH’s first Lifetime Achievement Award. The organization’s Esplanade Project continues to host “Funnel Tunnel,” a temporary public sculpture by Patrick Renner installed in the Montrose Boulevard median located in front of the ALH and dedicated in honor of the late Houston artist, Lee Littlefield. The main gallery features “Group Show” presenting the work of Rachel Hecker, the ALH’s 2013 Artist of the Year.

Rachel Hecker is one of smartest and most inventive artists in Houston. She usually works in series. Sad and Pissed was a series of paintings chronicling her breakup with her girlfriend using cartoon avatars. Her most recent work is a series of paintings of “guys who look like Jesus.” The works she is showing at the Art League are all by her but don’t necessarily fit neatly into her other work or series—hence the name Group Show. 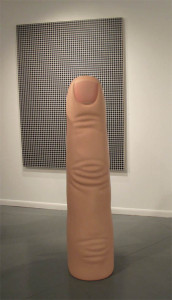 But really, the show is pure Hecker: witty, creative and beautifully crafted. The works are like random snapshots from the artist’s mind. There are goofy art jokes like the giant 5 foot 5 inch thumb, Finger Statue (2013), in front of a painting with a navy gingham pattern titled Hermann Grid Variation (2009), a riff on the optical illusion of the Hermann grid. The pad of the thumb has a smiley face painted on it that looks like it was drawn in ballpoint pen. In a similar vein, Hecker places a sparkly snowman sculpture, his “coal” eyes and mouth arranged in a grin of longing, in front of photo on canvas of a snowy pine forest.

A monumental version of a plastic hospital bracelet that reads “FALL RISK” is funny and sad at the same time. Is the bracelet in danger? From one angle it reads “ALL RISK.” But the idea of reducing a person’s medical state to a handy label is tragic. The original object is likely of personal origin; Hecker spent a number of years caring for her ailing mother. 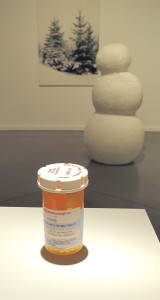 Floating Xanax (2013) is another medically derived sculpture. It’s a prescription bottle of Alprazolam (Xanax) with Hecker’s name on it. Alprazolam is prescribed for anxiety and panic attacks; the bottle, displayed on a pedestal, spins constantly, like an endless loop of anxious thoughts. (The hovering, spinning bottle is achieved through a magnet and electromagnet.)

Creating its own kind of anxiousness is a collection of paintings of eyeballs with multicolored irises clustered together on a wall—all staring at the viewer. Other works, like the “Not Made in China” sign or the long yellow painting of “caution/cuidado” tape, are vintage Hecker. Ditto the giant pine tree air freshener. They tie into Hecker’s series of paintings of post-it notes and scratch paper, making the quotidian and disposable permanent and finely crafted.

Perhaps the work that surprised me the most was Hecker’s 2004 work 8 Specimen Boxes. Little bits of oyster shell, miniscule pebbles, peanut pieces and sticks are all carefully arranged in little windowed and cotton-filled specimen boxes. When I saw them, I thought they were really out of character. A lot of artists collect little fragments of things natural or manmade and present them elegantly. It’s finding beauty in the cast off and unexpected, but there can also be something annoyingly precious and self-important about it, i.e. “See, only I can find beauty in the world’s detritus. Other mortals pass these things by.”

And Hecker’s fragments are more overlookable that most. But when I read the works list, and I saw that they were made of polymer clay and acrylic I got the joke. Hecker painstakingly duplicated all these fragments of peanut skin and bits of shell. She probably actually collected the originals and is mocking herself for it.

Rachel Hecker: Group Show will be on view through November 15 at Art League Houston. (Posts on Kermit Oliver and Patrick  Renner at the Art League to follow…)

Hi Kelly Klaasmeyer,
I never thought Art League Houston was
Lame.
Why did you?

They do fantastic shows. Great work!
We have only heard good things about the ALH.

I live in Dallas and only see two or three shows a year at the Art League, but I also thought there were mostly pretty good.

I did see this show last month, a few of the pieces are brilliant! She works in so many different media it was not real cohesive. But very interesting. I did have trouble getting in though, I had to go thru the coffee shop.

I hate to repeat meinzelf but I think I should tell you a little bit about meinself: I know vat you are zinking. You are zinking “Oh no, Adolf cannot pozibly have anyzing gut to contribute to ze art vurlt.” Zis ist not true!!! I have plenty of zings to say about art! This is vhy I am back from ze det! Yet I feel that I shoot clarify a vew of ze mizaprehenzions about meinself beforehand.

Yez, I am responsible for the death of millions of people but it vas an accident! I vas at an important meeting viz all of ze movers unt der shakers of mein day unt ve vere eating frankenkraunzenbrenvinbrillers undt talking politics. I vas listening to Her Goring prattle on about zis unt zat and I took a drink of mien juice to vash down a bite of strudel. The juize was vile! It vas rotten! It was the most horrible, disgusting juize zat I hat ever hat in mein life and I haf very sensitive bowels unt zer is nozing more destructive for weak bowels zen rotten juize! It vas gagging on ze juice and ze strudel unt so I slammed my hand down on ze table und screamed out “Ve must get rid of ze juize!! It will invade und destroy mein colon!”

Now, I haf plenty to say about zis article but I vant to tell you a little bit about mien art background for those who are not vamiliar. I feel zat I have never been given credit for mien art! People point to mein dravings und mein vatercolors und zey say zat zis ist mein art. Nien! Zey ver only ze beginning!

I created the largest artist group in ze vorld! Ve vere very ahead of our time! We created art on all levels! Architecture! I redesigned ze Berlin!

Fashion! Have you ever seen our uniforms? Can you say ze vort”fabulous”?

Graffiti! Ve put Banksy to shame! “Oh, look at me I am ze Banksy unt I hung one of mein paintings in ze art museum wizout ze permission cause I am so cool”. Dummkopf! I emptied entire museums and hung whatever I wanted on the valls vizout permizion!

Video Art! Ve had a whole team of people vorking on making video art about our art project.

Ok, now zat you know me a little better let me say a few zings about your post:

Vow! Zis show looks so interesting! You zaid: “But really, the show is pure Hecker: witty, creative and beautifully crafted. The works are like random snapshots from the artist’s mind. There are goofy art jokes like the giant 5 foot 5 inch thumb, Finger Statue (2013), in front of a painting with a navy gingham pattern titled Hermann Grid Variation (2009), a riff on the optical illusion of the Hermann grid. ” Zat zoundz great! I love ze jokes! Zer izt nozing funnier zen a zculpture! People zhould really look at art az a joke! Ze art is unt joke unt it is fabulous! Ve shoot put ze Jeff Foxworthy in ze gallery unt he could tell us ze jokes unt make us all laugh unt it would be ze art joke unt it would be very gut! Maybe I could open for him? No von can tell a joke like I can!

I like zos specimen boxez too! “And Hecker’s fragments are more overlookable that most. But when I read the works list, and I saw that they were made of polymer ” Zat really ist unt funny joke! You know, mein art group ze NAZIs made ze zame joke viz zome lampshadez once. People zot to zemzelfz “vow, zat lampshade really looks like skin from a cow but zey vas playing ze art joke on zem! Maybe it vaz not done in gut taste but I hear zat ze are vorz a lot of reichsmarks now unt isn’t that how ve tell vat gut artvork ist?

Vell, it is zo gut to be back from ze dead unt talking about mein pazzion! free to check out mein new blog unt zay heil-o!