Breakfast of Duchampians: “It is what it is. Or is it?” at the CAMH 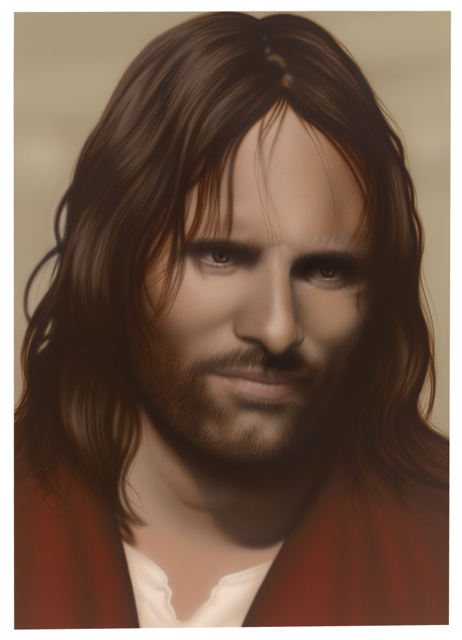 It’s possible of course that Marcel Duchamp did not invent the readymade—after all, artists have prized random objects since cave painters first stumbled upon bison-shaped driftwood in the streams near Lascaux. But such formative acts count for nothing: It’s that later Frenchman to whom all the credit falls. Principally, this is because he coined the term—which always helps—but also because he gave the whole business a crucial twist with the additional step of declaring, “I made this.” The substance of that claim of authorship appears deceptively simple, perhaps even absurd. But its significance in advancing the dimension of choice and deliberation as an act of “making,” in every way equivalent to the manipulations rendered by the artist’s hands, can hardly be overstated.

As it turns out, this sly conceit of Duchamp’s would provide a hip-check from which art would be sent unremittingly into the sideboards of self-conscious conceptualism. With the result that—much as with jazz, when Charlie Parker and Dizzy Gillespie began meddling with expectation and negative space—the art form blossomed with sophistication, even as the audience fled.

For the Contemporary Art Museum Houston (CAMH)’s exhibition, It is what it is. Or is it?, it’s not so much the roots of the readymade, but its leaves which have curator Dean Daderko interrogating the periphery of the form. Here, the CAMH’s new curator surveys the work of an internationally diverse group, comprised of 18 artists from nine countries, with an eye to exploring the readymade. Not as it appears in the taxidermy of static literalism, but as it occurs in the unfettered wilds of contemporary art. To this end, Daderko has captured a sampling of outliers and archetypes alike, and no matter their reluctance, he means to put them in correspondence and see how they play.

The paintings—or as Duchamp would derisively have referred to them—“retinal” art, test the formal elasticity of the readymade, and are squarely in line with a sideways glance from Duchamp. Generally, the inclusion of painting in a survey of readymades raises concerns of binge drinking, or liberal testosterone supplementation. The surprise however, is the case which the selected works generally make for themselves. Chief among these are a trio by Rachel Hecker, Jesus #1 (Viggo Mortensen/ Lord of the Rings), Jesus #2 (David Gilmour/ Pink Floyd), and Jesus #8 (David Axell/ Joseph Abboud Ad) (2011).  In each, the aforementioned actor, musician, and model, assume stand-in roles for alternately contemplative, sorrowful, and pained depictions of the well-known Nazarene.  Here the melodramatic postures, state fair kitsch, and velvet painted sentimentality—not to mentioned the casting issues—conspire to produce work every bit as satisfyingly irreverent as proper readymades need be. 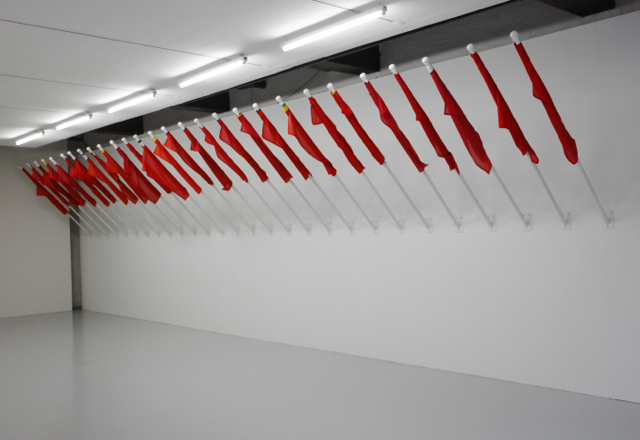 Interestingly, two of the paintings whose arguments for inclusion are somewhat less persuasive, are nevertheless two of the best.  The first of these, Catherine Murphy’s Trash Bags (1996), depicts a closely rendered pair of—yes—trash bags, cast upon the snow and separated by the accumulation of a half-week’s dappling of rabbit tracks. Where the painting itself makes for a tenuous fit, it settles the debt with a striking visceral fidelity. Another such work is the small but gravely handsome Ellen Altfest painting, The Leg (2010). In this case the work depicts an abbreviated section of bare calf—below the knee to just above the ankle—as though the foundation of a still life. The painting attends with excruciating care, to the veins faintly plumbed beneath the velum of the skin, the individual hairs of the leg, even the weep of a tiny scrape. The painting’s ground is one of simple dirt, its dead grasses, needles and fibers, and all that matter which is the progress of soil. The work’s surface displays a very slight impasto, which lends the impression of being somehow formed of the very matter it depicts. And like the detail of a work suspended somewhere between Lucian Freud and Andrew Wyeth, it eschews any notion of the photorealistic, for that granular and penetrating accuracy of the painters’ voice—and is all the more arresting for it.

Among those pieces which are just at but still within the boundary of the form, a smart work by Fayçal Baghriche is a standout. In this case, Envelopments (2010) appears as the ceremonial display of 28 red flags mounted and wrapped around their respective flagpoles. The key, however, is that despite appearances, the 28 flags are each of different and distinct national origin. The viewer sees only each flag’s final color (red). Baghriche employs this common affinity for the color as the fulcrum of a question; one which challenges their distinction, and further, the notion of national identity itself.

At the other end of this scale are some of the pieces whose curatorial mass lends order and focus to Daderko’s survey. Among those providing gravitational center to some of the exhibition’s more far-flung satellites is Jamie Isenstein’s Smoking Pipe (2006). This sculptural work is comprised of an antique two-drawer end table and a modest wooden tobacco pipe, which rests upon it. Such highly referential work often suffers from overreach and insecurity—but here the invocation of Rene Magritte’s The Treachery of Images (This is Not a Pipe) (1929), is a perfectly measured sight gag with the immediacy of the setup and its punch line delivered simultaneously.

Three more stars which, in this instance, cast their light on concerns of value, belief and signification, are Latifa Echakhch’s Frame (2010), Patrick Killoran’s An Inconspicuous Addition (2011) and Pratchaya Phinthong’s Demonstrations (2009). With Echakhch’s Frame, the border of a prayer rug whose body has been carefully removed is mounted on the wall as though it might be the remnant of a tapestry, or the frame for an absent image. What remains are merely the fringed and coiled edges with which Echakhch poses provocative questions about the substance of belief, where it resides and the extent to which it is ornamental.  Killoran, on the other hand, simply offers a garden-variety red-and-white cooler filled with ice, a rough diamond, and time—for much of which the diamond rests in perfect anonymity. Killoran’s piece, rather than taking questions, seems to make forceful assertions about the inadequacy of perception and the conditional nature of value—where time and process alone serve as the catalyzing agents for revelation. 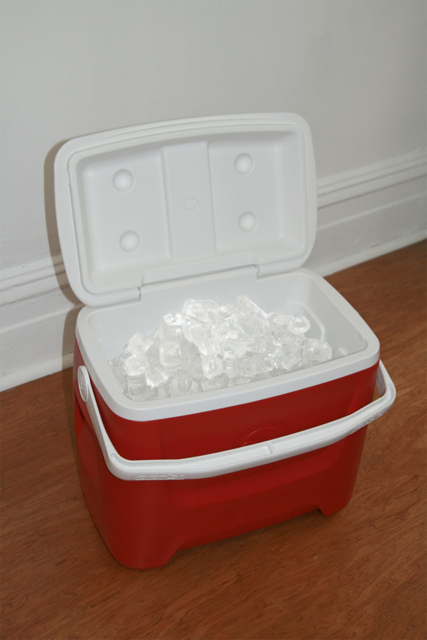 Among Daderko’s most complex selections, however, is Pratchaya Phinthong’s Demonstrations. In this case the object itself is merely an artifact, because the nuances of its story are the actual work. It’s a story which seems to ripple and vary with the wind of its telling. Based on a “Bangkok Post” interview with Phinthong from September of 2011, along with some supplementary sources, it goes something like this:

Back in 2008, Thailand’s former prime minister, Thaksin Shinawatra, and supporter of an opposition party, was trying to foster protests against the sitting government. To muster warm bodies, he was offering to pay locals and migrants 1000 Thai baht (about $30 USD) to form protests in the city. He could easily afford to do this, it turned out, because he was paying them in forged 1,000 baht notes. Nevertheless, protesters came, protested and received their illegal and worthless currency. So for an exhibition entitled Rooms in 2009, as the substance of his work, Phinthong spent his project budget of some 30,000 baht (about $1,000 USD) to acquire just one of these illegal and highly elusive 1,000 baht notes.

Just the sort of work to eat its own intellectual breadcrumb trail—while this last piece may require rousing the gallery attendant to view—its conceptual dimensions are nonetheless riveting, if also inconclusive. Like a game of financial telephone, Demonstrations proposes a constant valuational reshuffling which doesn’t so much recontextualize as further subvert the continuity of objective value. With the consequence that in the finest Duchampian tradition, Phinthong’s actual labor of choice has not merely transmogrified a lump to bison, or stool to art, but—Lazarus-like—has reintroduced value to something which is not merely valueless, but fraudulent.

Certainly, It is what it is. Or is it? is no matter of carnival mirrors and cleverness—its difficulty and evasiveness are genuine.  Daderko concedes that even for him, the exhibition contains works which remain reluctant, even closed. And this, he insists, is the point. The readymade’s purpose was not in affirmation, but challenge. And that gauntlet is one which Daderko is perfectly content to throw down.

we should also include the fact that the great French artist Marcel Duchamp was introduced to “ready mades” through West African art much like Pablo Picasso, the famous Spanish painter. The concept of the ready made has always included the tweaking/intervention to an exiting object intended for a specific function. While Duchamp did come up with the word “ready-made” he did not invent the concept behind it. Much like Sir Isaac Newton articulating the concept behind the “laws of gravity.” Newton did not invent gravity but he did articulate its function.

The difference between European cave dwellers mark making on walls and West African culture is that there was a conscious investment in the concept and execution in the West African art both Duchamp and Picasso were influenced by and appropriated. Picasso though failed to understand the depth within the concept and simply ignored what Duchamp built his career on.

I can’t really hold my tongue about this exhibition. It just reads like a superficial Brooklyn or SF gallery show – not institutional quality in the least. Since I am already being the “grumpy old man” I’ll go ahead and say the skateboards in an exhibition are just unforgivable.