México Inside Out: Themes in Art Since 1990 at the Modern Art Museum of Fort Worth is an ambitious display of Mexican contemporary art, featuring works by 23 artists, many of whom have never been displayed together, in a mini-biennial of the latest and greatest hits of art created in Mexico since the 1990s. Curators Andrea Karnes and Alison Hearst have organized a diverse selection of works dealing with history, politics, the drug war, and the plight of the working class.

Mexico has metaphorically taken over the Fort Worth Modern, filling its galleries with a certain energy different from that of the monographic shows that one usually encounters in Fort Worth’s culture district. The energy is felt even before one enters the museum: works and projects related to the show occupy spaces throughout the city. Drivers passing the museum are confronted with Mala memoria (Poor memory), an ambiguous phrase carved into a 40-foot concrete wall commissioned for the show from the art collective Tercerunquinto. Seemingly disconnected from the visual space of the museum, the piece is beautifully positioned on its east lawn facing one of the busiest intersections in the city. Tercerunquinto, whose members include Julio Castro Carreón, Gabriel Cazares Salas and Rolando Flores Tovar, invite us to consider the relation “poor memory” has with the Texas/Mexican political past and present, and the memories of migrant workers who have been made to leave their homes to work in our more promising economic system. 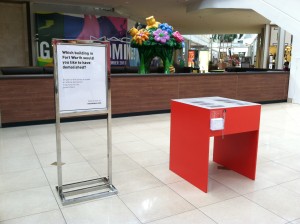 Another work that bridges the gap between public space and the museum is Gustavo Artigas’ Vote for Demolition, a piece the artist has installed in Los Angeles, Lisbon, and Moscow. Eight voting boxes (three in the exhibition space and 5 at alternate locations in the city) ask visitors to vote for which architecturally significant building in Fort Worth should be demolished. Artigas, interested in how citizens view the structures that surround them and the politics that are connected with them, admits that it is doubtful a building will fall, but what matters is the public discourse that will ensue.

Within the exhibition space the curators have assembled works that are sometimes aesthetically poetic and at others didactically jarring in their connection to the harsh realities that fill the streets and history of Mexico by Melanie Smith, Francis Alÿs, Thomas Glassford, and Gabriel Orozco; today considered the godparents of contemporary Mexican art. 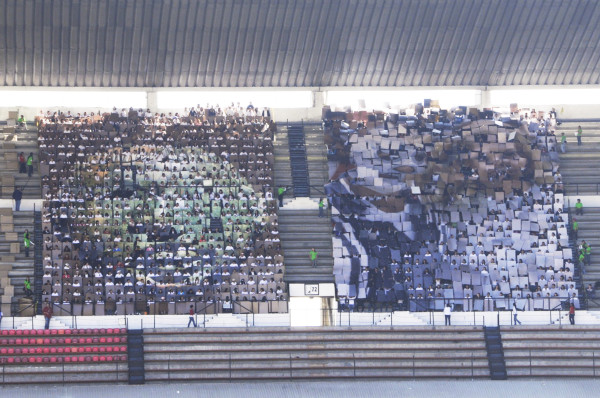 Smith’s Aztec Stadium. Malleable Deed from 2010 is a 10-minute 29-second performance-based video. In it, 3,000 students from Mexico’s public school system perform a series of beautifully synchronized actions in Mexico City’s Aztec Stadium, recalling the brutal 1968 Tlatelolco Massacre, in which students were killed by the government days before that year’s Olympic games. As the video progresses, one pays less attention to the images of Mayan visages, luchadores, and pop icons presented by the coordinated students than to the breakdown of this order into chaos, cementing the fact that the ‘60s counterculture which inspired the world’s youth to stand up for their beliefs has long been dead. 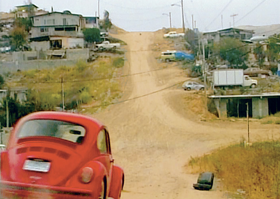 Referencing the unsuccessful Mexican government’s efforts to reach the peak of modernity, Francis Alÿs’ Ensayo 1 (Rehearsal 1) from 1999-2001, is a 29-minute 25-second video in which a Tijuana brass band rehearses a song over and over again while a red Volkswagen (driven by the artist) attempts to drive up a steep hill. Referencing the myth of Sisyphus, this little engine that could never quite makes it to the summit, rolling back down every time the band pauses or makes a mistake. Rather than leaving viewers with a feeling of dissatisfaction however, Ensayo 1 inspires a sense of resilience that causes one to believe that this repetitive effort will one day achieve its purpose.

“Mexico City, from its energy to its ailments” inspires the Texas-born artist Thomas Glassford, whose installations Stela 1K and Untitled Collection from 2013 fill an entire gallery of the show with the artist’s collection of colored broomsticks. Overlooking Ellsworth Kelly’s Dark Blue Panel, Dark Green Panel, and Red Panel, Glassford’s work speaks to minimalist abstract painting and sculpture using materials that are usually discarded, turning them into vibrant colored works that reflect Mexico’s famous iconic open air produce markets rather than the garbage dumps from which they were collected. 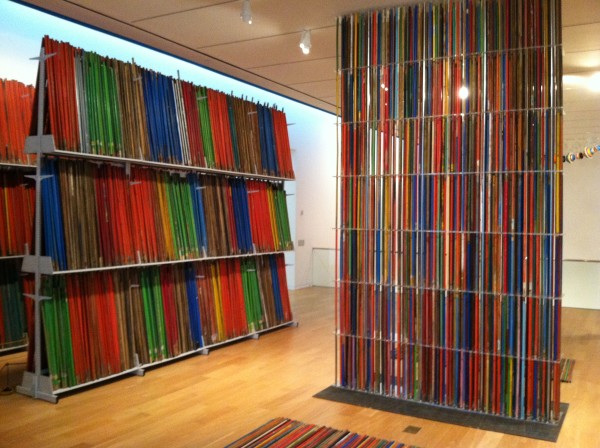 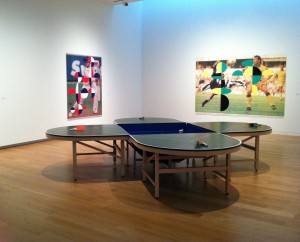 Gabriel Orozco’s 1998 Mesa de ping-pong con estanque (Ping Pond Table) is a twist on a familiar game and brings with it an interactive side to the exhibition the likes of which has never been displayed in the Modern’s galleries. Consisting of altered ping-pong tables with a pond filled with lilies at its center, the piece invites visitors to play a round and “cross the pond,” a witty play on words that questions issues of territorial borders and immigration.

Contrasting these subtle yet powerful critiques of Mexican and international culture by older, established artists are the works of a newer generation whose political and social critiques bring a serious note to the exhibition. 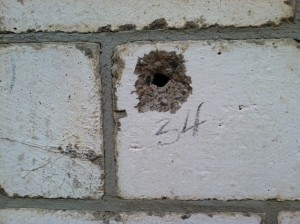 Artist and forensic pathologist Teresa Margolles brings sites of Mexican crimes into the gallery space using a minimalist vocabulary. Margolles brings artifacts from instances of violence in Ciudad Juárez and Culiacán into the viewing space, reminding the viewer of his or her own mortality like European memento mori works of the 16th and 17th centuries, connecting them to the grisly reality of the Mexican drug war. Margolles’ Muro baleado (Culiacán) from 2009, translated as Shot Wall, Culiacán, is a cinder block wall that has been transported from a site in the artist’s hometown where a deadly gun battle ensued between police and narco traffickers. Like one of Robert Smithson’s non-sites, this work connects Fort Worth with this violent moment in time.

Then there is Yoshua Okon’s seemingly playful video installation Pulpo (Octopus) from 2011. Created originally for the Hammer Museum’s Artist Residency Program, Okon staged re-enactments of scenes from the Guatemalan Civil War in the parking lot of a Los Angeles Home Depot, with Guatemalan day laborers who had fought as guerrilla warriors in the conflict. Onlookers, thrown off by this unexpected sight, continue with their business, at ease with not knowing what they are witnessing, a sentiment that can also be applied to U.S. citizens’ lack of understanding concerning their nation’s involvement in this war.

Lastly there is the work of the artist Artemio. A regular l’enfant terrible, Artemio’s series of photographs entitled MEX ATTACKS! from 1998 is a part of a yearlong performance by the artist where he traveled around Europe, donning a serape and sombrero. Exploiting the guise of a “stereotypical Mexican,” Artemio—in a time before instant sharing and friend requests—would have tourists photograph and forward to him images of himself in various historic places such as the Arc de Triumph in front of which he is taking a siesta, and at the Musée de Louvre where, in front of The Coronation of Napoleon, he poses as the ruler himself. Causing viewers to question stereotypes at large, Artemio’s tongue-in-cheek way of playing into misunderstandings of Mexican identity brings a needed lightheartedness to the exhibition. 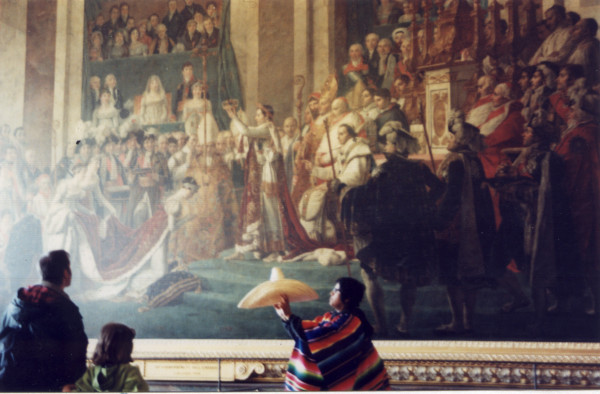 México Inside Out: Themes in Art Since 1990 is dense, and will require multiple visits. Glassford’s Untitled Collection, Orozco’s Ping Pond Table, and Margolles’ Muro baleado (Culiacán) are highlights, but each work in the exhibition brings with it its own experience of Mexico City or the world at large. Pencil in at least one trip to the Modern for this is a show that no Texan should miss.