When I first saw the press release for Corpocracy, I groaned. Emblazoned in red with the white Coca-Cola ribbon billowing across it, I feared the worst for this group show: that it would be little more than a miasma of didactic agitprop, yelling at me in the most obvious ways possible. Luckily, my low expectations were far surpassed: Corpocracy at the Station Museum in Houston incorporates a broad range of compelling work, whether convincingly bombastic or whispering in the corner. But then the Station Museum is pretty good at welcome surprises.

The reason this exhibition’s concept originally made me cringe was because much of this kind of work blindly punches at corporate America without always asking why. There’s something tempting about appropriating logos of faceless corporate entities, of wringing our hands and shouting at those with money and power: but to what end?

When these messages cater to an audience made up of a largely liberal-leaning artistic community, what is this work actually doing other than preaching utterly mainstreamed ideas to a nodding choir? The problem is that too often this kind of work can devolve into a binary, us-versus-them conceit: i.e. we little guys aren’t the problem and corporate greed is. But in a capitalistic society, in which where and how we choose to spend our money holds ultimate sway, are we not fully implicated? Hell, I’m drinking a Coke as I’m writing this. 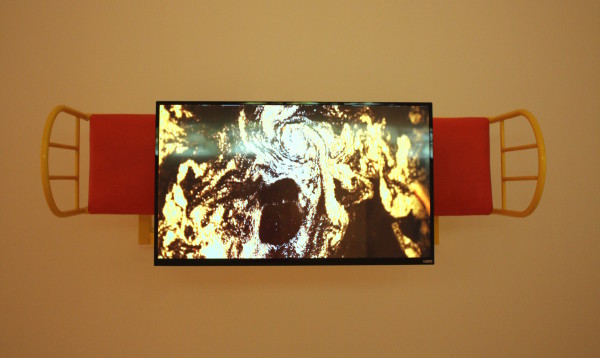 And there is some work in this exhibition that’s problematic in this way, such as Yoshua Okon’s Freedom Fries (2014) series, which includes a single-channel video, a multi-channel video installation, and a sculptural-video installation. On the left wall, there are two McDonald’s chairs mounted to the wall, their backs pointing directly at us. In the middle of them is a flat-screen TV as a stand-in for a table, playing a close-up of swirling french-fry grease. It looks like soupy, frothing sewage lava. Okon somehow convinced a night-shift McDonald’s manager to film the inner workings of the restaurant, as well as a customer. The customer, an obese woman, lay across a video table in nothing more than her beige underwear.

In Okon’s accompanying statement, he says he’s delving into the massive psychological aspects of such a large, soulless fast-food chain, including the relentless pounding of its customers’ self-esteem. And there is something pathetic about the way the woman lumpily sprawls herself across the table. But as much as Okon’s statement could be true, it’s equally obnoxious. How do we know this woman has a poor self-esteem? Because she’s fat and likes McDonald’s? As silly—and dangerous—as it is to assume this or any overweight person has low self-esteem, it’s also just heavy handed, easy symbolism. McDonald’s = evil perpetrator, and fat people = unwitting victims. After seeing enough recent video art of sexy, slender third-wave “feminists” prancing around in their underwear, I found her exposed and unapologetic body exhilarating. 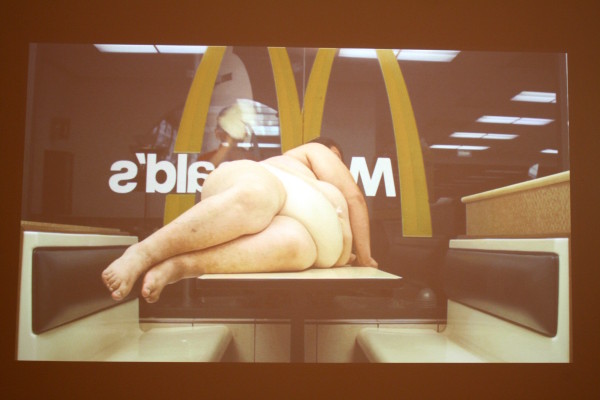 Perhaps the strongest work in the show—and there was plenty of it—came from Ron English, his work taking up more than an entire wall in the second-to-last room. He covered the entire wall in a collage of the American flag comprised of doctored, satirical ads and bumper sticker-esque sayings. Again, this kind of rhetoric plays into the easy didacticism of the us-versus-them binary: we left-winged, free-thinking people can’t be at fault, so it must be the Bible-thumping, diesel-truck-driving, Walmart-hoarding hoi polloi wreaking havoc on society, destroying our culture and our planet. And that would be it for the work if the flag wasn’t interjected by a surprising and hyper-realistically painted giant, throbbing-veined, blue hulk baby—a figure seemingly borne and arisen from a nuclear apocalypse. Steroidal, hemorrhoidal, all-consuming and blindingly grotesque: this is how English gets to the heart of the matter, conflating and compounding the aspects and objects in our world that constantly seduce and manipulate us, and doing it in a way that doesn’t devolve into expected caricature. 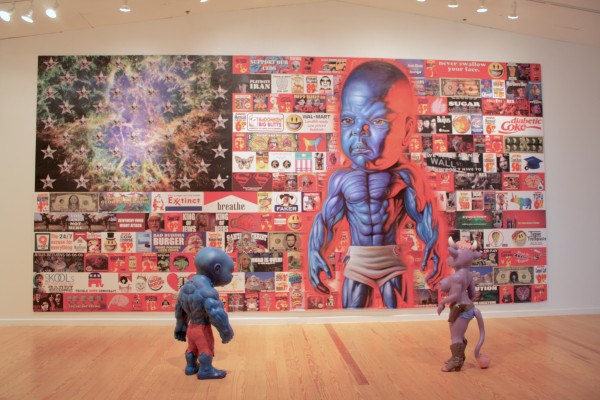 In the final room, Capitalism Works For Me! True/False (2011) by Steve Lambert looms large, like an exciting, overwhelming gameshow. Lambert asks us: “Does capitalism work for you?” It’s an installation that is sleek, sexy, and absurd; after all, who doesn’t want to slap a big red button to buzz in her answer: true or false? Yet here we are again, watering down a complex discussion to either a yes or a no. The best part of Lambert’s work resides in his artist statement, where he compares engaging in a conversation about capitalism to striking up a conversation about Jesus. Indeed, they are similar: they both rely on a faith that is incredibly fraught, that is problematic, that provides comfort, that gives a semblance of structure. Of course capitalism doesn’t work for me! Or, Of course capitalism works for me! Maybe because I was annoyed that it so simplistically made me choose one or the other, or maybe because capitalism was already losing by over one hundred points—I voted “true.” 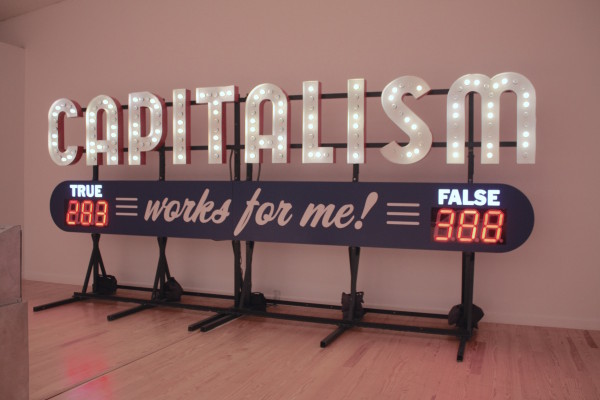 ‘Corpocracy’ runs at the Station Museum, Houston through February 14, 2016.

This review made me cringe. It’s like you didn’t see the show at all – there were 13 artists on deck, not just Ikon, Lambert and English. Here’s another view of the show >> http://www.huffingtonpost.com/fixcapitalism/challenging-the-corpocracy_b_8443474.html

commies can’t make art about anything but money lmao