Currently on exhibit at the Fort Worth Modern is a focus exhibition on the work of Nigerian/British artist Yinka Shonibare. Shonibare’s work is usually categorized by themes of colonialism/power and race/cultural identity. Although the artist does address those themes in his work, he does so within the larger rubric of artifice and paradox.

Shonibare’s dual identity is one example of his paradoxical relationship between class and power. Born in England to Nigerian parents, Shonibare grew up in Nigeria and moved to London to attend art school. In his Art 21 video, Shonibare speaks about his upbringing. His grandfather was a Nigerian tribal chief and his father is an attorney, so he grew up privileged. It wasn’t until he moved to London that he experienced prejudice. He admits that he enjoys a certain lifestyle, yet his work has always been critical towards the aristocracy.

And there is the matter of the MBE (Member of the British Empire) that appears after his name.  Awarded the medal by the Queen for exemplary service and achievement in the arts, some critics thought that he should refuse the honor, since it comes from the institution that he criticizes. Shonibare not only accepted the honor, but legally incorporated the initials into his name. His rationale? He can exert more power as an insider, rather than an outsider. It’s easy to say that Shonibare should have taken the high road, but how many of us would turn down a medal from the Queen? It’s pretty cool to be recognized by the Queen of England, regardless of whether you agree with her politics. 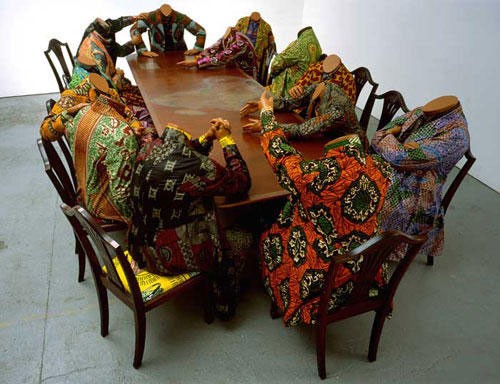 At the Modern’s exhibition, the sculptural tableau Scramble for Africa (2003) is the gallery’s central focus. Fourteen headless, mixed race mannequins sit at a table dressed in European period clothing made from “African” batik textiles. The brightly colored batik fabric is Shonibare’s signature element that appears in all of his work. Although we associate the pattern and colors with Africa, the irony is that the Dutch originally produced the fabric in Indonesia. When it didn’t sell well in Indonesia, the fabric was exported to West Africa. Despite its European origins, the textiles now represent Africa. Shonibare uses the fabric to question our assumptions about the veracity of history and how identity is fabricated.

The installation is based on the 1884-1885 Berlin Conference where European leaders came together to determine the fate of the African continent. Without making too many bad jokes about how the leaders lost their heads or their obvious “brainlessness,” what struck me was the nature of the mannequins’ body language. Seated closely together, some of their gestures seem a bit too familiar, almost intimate. These figures represent European leaders who negotiated for their own self-interest and that of their respective countries. Would they be that collegial or casual? Or perhaps that is Shonibare’s point—that Africa’s fate was decided over a jovial dinner party.

Although dressed in identically tailored suits, each mannequin’s fabric is made from a different color and pattern. In fact each element of the suit is made from a contrasting pattern and color, including the topcoat, pants, vest, shirt and tie. The result is a dizzying display of conflicting patterns and colors, which undermines the “seriousness” of the meeting. I can’t help but think of my grandmother’s fashion advice to never wear stripes and polka dots together. Shonibare’s combination would send her into apoplectic shock. 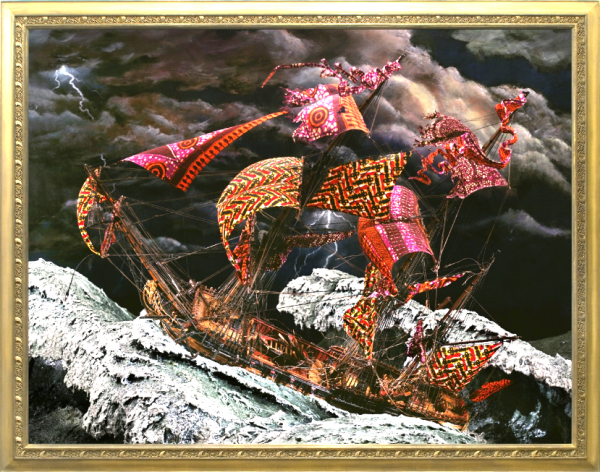 Also on exhibit are three large-scale color photographs with ornate gold frames. Le Meduse (2008), references the French naval ship that ran ashore on its 1810 voyage to Senegal. The captain and 250 of the crew boarded the lifeboats. The rest of the passengers—146 men and one woman boarded a raft constructed from the ship’s wreckage. Initially towing the raft, the captain abandoned it. Only 15 men survived, the rest dying from exposure, dehydration, hunger and cannibalism. One immediately thinks of Gericault’s iconic 1818-19 painting Raft of the Medusa that depicts this event and the passengers’ struggle for survival.

Shonibare’s photograph shows a model of the ship tossing on waves that look like white cake frosting. A painted backdrop depicts the night sky. The ship’s sails are made from batik fabric strips. Shonibare chose to show the ship in distress, yet without any evidence of human presence. The artist exaggerates the artifice of the image as a symbolic gesture to emphasize the tragedy of the event. While the photograph is masterfully constructed, I wonder whether the theatricality and artifice indeed assert the disaster caused by colonialist ambitions. I interpret the “fake” set as a metaphor to question historical assumptions or authenticity of history.

The two other photographs on display are from Shonibare’s fake death series. Fake Death Suicide Manet (2011) is based on Manet’s little-known painting from 1871, where a man is shown dead on his bed with a revolver in his hand. Fake Death Picture (The Death of Leonoardo da Vinci in the Arms of Francis I-Francois Gullaume Menageot) (2011) is based on Menageot’s painting from 1871 that shows a group of people paying their respects to the dying artist. 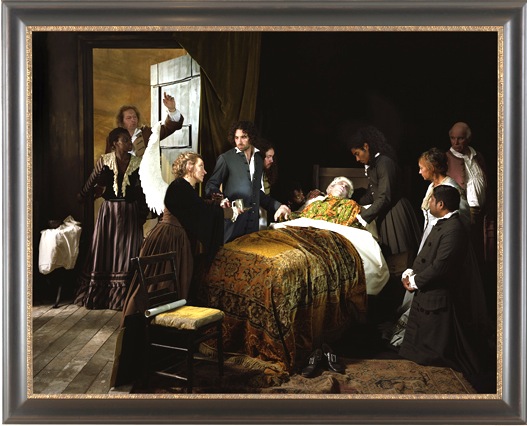 In both photographs, Shonibare inserts multiple layers of artifice. Both contain highly theatrical, constructed stage sets. Both main characters feature a white-wigged European man, dressed in a suit made from “African” batik textiles. In the original Manet painting and Shonibare photograph, a dead man would not still be holding the revolver, thus adding another “false” element. In the Leonardo death photograph, Shonibare places people of many races and classes at the dying man’s beside.  This serves to illuminate the omission of people of color from art history.

I admit that I’m a bit jaded when it comes to photographs that reference art history. I spend more time comparing the original source to the “re-do” (an academic Where’s Waldo game), noticing the differences, rather than focusing on the artist’s intention.

The final work in the exhibition is an excerpt from the video Odette and Odile (2005). Inspired by “Swan Lake,” Shonibare’s video features one white dancer and one black dancer mirroring each other’s movements. Both are dressed in tutus made from batik fabrics. In some ways, ballet is the ultimate artifice. Dancers practice for years so that their movements seem effortless. On stage, they are beautiful, graceful and ethereal beings. In reality, they suffer from chronic physical pain and eating disorders.

Shonibare’s interpretation of “Swan Lake” leaves the viewer with many unanswered questions, which is the power of the work. We do not know which dancer is Odette (the good swan who is always portrayed wearing white) and which dancer is Odile (the bad swan who is always portrayed wearing black). “Swan Lake” is the story of trickery, with Odile featured as the villain. Yet in my mind Odile was the victim, serving as the actor in her father’s evil plan. In Shonibare’s video, it is unclear who is mimicking whom. The empty gold frame suggests a mirror, yet at some point the dancers switch places. The choreography and performance of the dancers is so precise; they never appear to lose their synchronicity. The illusion is only broken at the end when we hear the dancers’ heavy breathing. They pause, take off their pointe shoes and walk off camera. 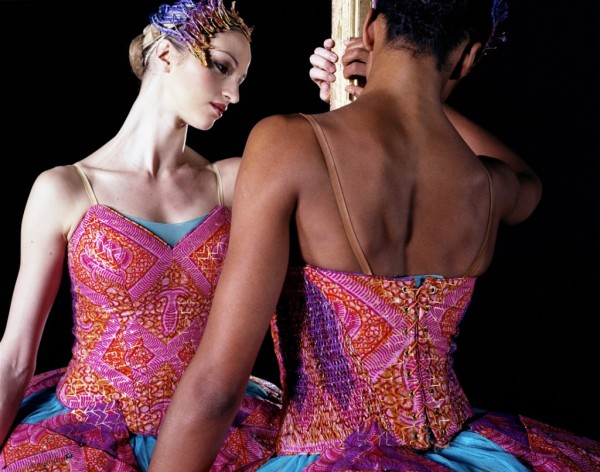 Initially, I was disappointed that there were only five works in the exhibition. I wanted to see more. Yet more might have diluted the power of the few. Each of the works represents a major aspect of Shonibare’s oeuvre. Given the layers of history and meaning that Shonibare infuses in his art, each work requires time to decode and absorb. I hope that visitors will take that time.