Is Too Much Enough? TX 13 at Blue Star Contemporary Art Museum

At six o’clock Thursday afternoon, the doors of Blue Star Contemporary Art Museum were opened to the general public, and new people started to flow into the cavernous exhibition space to join those already gathered at the TX 13 Group Survey Exhibition. Greetings were made, a toast offered, and the crowd was asked, “How many of you are artists?”

Over 50 hands shot up, a strong showing of the 70 artists from all over Texas who made the cut in this year’s Texas Biennial. Perhaps a few San Anto artists unaligned with the Biennial joined in the count, too. Blue Star has been artist-run since 1986, and the rooms would be empty if there wasn’t a local artist in the house.

By closing time a few hours later, over 750 people had been in and out. Not a small showing for First Thursday, the monthly preview night before First Friday revelers storm Alamo Street on their way to the bars and restaurants which have taken over the Blue Star Art Center, which for over two decades housed hardscrabble studios and alt art spaces—most lost to pricey renovations that began a year and a half ago. 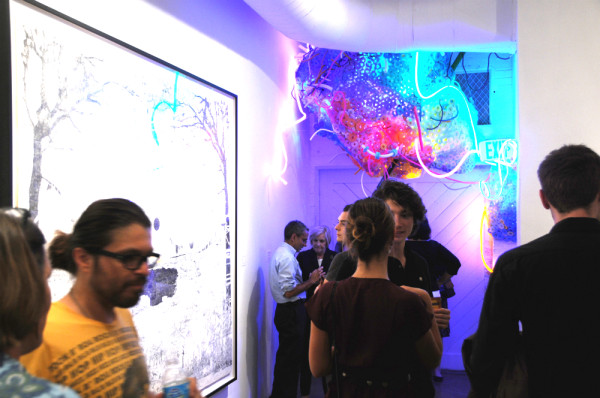 But contrary to expectations, art hasn’t left the Center. Four new art spaces—retail replacing experimental—have moved in over the last months; the newest and most extravagant, Cinnabar Art Gallery, shared its debut with the Biennial show by presenting full-scale prints of nudes as part of Fotoseptiembre’s month of photography exhibitions. The new gallery’s rich appointments seemed to startle some visitors, no doubt more used to being offered a beer than a glass of prosecco.

But the real shocker was inside the museum. Not a small space, the promised 70 artists–the first time all chosen talent in the Biennial open call would exhibit in one location—had seemed an impossible number to fit into even the rather large Blue Star. Big changes to the interior made it possible. “It’s a big place, but it just got bigger, because it is a very ambitious show,” said Steven Evans, Blue Star’s consulting manager. “We added 110 linear feet of wall in the main space, and UTSA made their Satellite Space available to be the Blue Star Annex for the run of the Biennial for video and performance-focused work.” 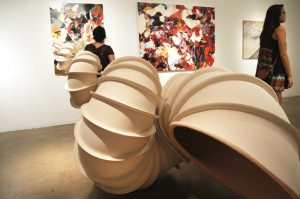 Three massive floating walls now break up the once-hollow center of the main room; behind the second and third galleries, the back room is divided in three darkened viewing rooms for video. There are some freestanding 3-D pieces in the exhibition, but the majority of the work is on the walls, ranging from paintings, drawings, and video screens, to textile works. There appears to be more narrative work than in the last edition of the Biennial; mostly, there’s more everything. If the 2011 Biennial was, as some claimed, too slick and shiny, the massed works by the 2013 juried artists counter with a rumbling texture reminiscent of worsted wool. Or thrice-painted graffiti. Like the storybook bazaars that some art fairs seem to emulate, the dense, contesting collection has in the aggregate enough energy to keep your eyes open. Whether any particular piece pleases one’s eye, seems to be beyond the point. That’s not a coincidence.

Unlike the last two runnings of the Biennial, this year 12 curators and Curator-at-Large Virginia Rutledge, who single-handed the 2011 selections, each made individual choices (albeit with input from the others—but not always agreement) to select artists in the open call. That there were disagreements is perhaps the group survey’s strong point. But that the show is in San Antonio is, to those used to past runs of the Biennial, the strangest part of all. 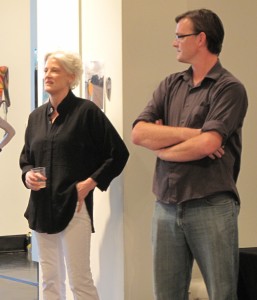 Shea Little, director of the Texas Biennial, and one of the founders, gave Glasstire some background on the event, and explained how the survey show came to be in San Antonio.

Beginning in 2005, the first two biennials were juried by panel, giving, says Shea, “not the strongest results,” though press at the time (including Glasstire) was mightily impressed they had pulled off a sequel after organizers of other large art events had run one up the flagpole, then demurred.  In 2009, artist selection was changed to a single person, California-based curator Michael Duncan. “In 2011,” said Shea, “he passed the torch to Virginia Rutledge who invited artists in addition to the open call, and identified works that were already in existence that were of a certain caliber that would lend credibility and more prestige to the project … she did great things to transform the Biennial from a very Austin-focused exhibition to a statewide project that, I think, the state really embraced after 2011. There wasn’t snickering, about, ‘That’s the Austin biennial.’  Oh, OK.”

Rutledge chose a dozen curators from (mostly) Texas, New York, Los Angeles, and Mexico City (see the complete list and bios at texasbiennial.org). “Austin still has its representation,” said Shea, “but there is still a little bit of infrastructure to be desired in Austin. We had hoped to have a bigger exhibition there, but there just are not spaces like Blue Star or Lawndale that have a large enough exhibition space to host a big chunk of it. And going back to past years, where it was so Austin-centric, we thought we would spread it out and shift the focus a little.”

The focus has indeed shifted. Like the particulars, it’s unlikely that there will be agreement on whether the effort is successful. And that, in all its strident diversity, is a good thing.

For a complete schedule of Texas Biennial events, visit texasbiennial.org.

The uncredited artwork-the second photograph of the article-belongs to artist… Miriam Ellen Ewers. Thanks to Scott Andrews for a thoughtful response to the show and an introduction to the regional debate.