Fresh meat! A blank page! A new beginning! The annual Big Show at Houston’s Lawndale Art Center isn’t the free-for-all it was when it was literally free for all (and curated by Walter Hopps), but I always look forward to it because I’m a hoper: I’m sure the Big Show will smoke out the undiscovered talents lurking Houston area swamps and suburbs, middle schools, painting-party classes, and even university art programs.

2014’s guest juror, Erin Elder of the Center for Contemporary Arts in Santa Fe, has curated the biggest Big Show ever, with 115 works by 106 artists, most of whom I’ve never heard of. According to Lawndale Director Christine West, a third of them aren’t even in Lawndale’s database. This year’s show was remarkable for its unremarkableness, lacking both the surprising highlights and the god-awful dreck of Big Shows past, but a dozen pieces stuck in my mind: 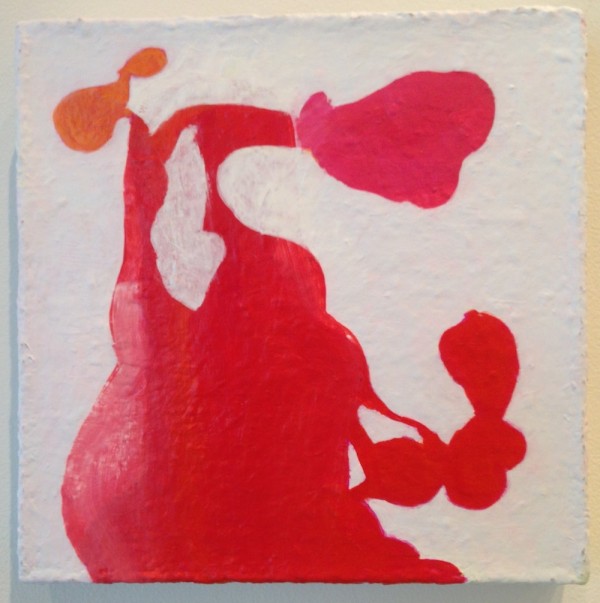 Laura Feld‘s Interior Number Two is unassuming, but I kept coming back to it. Blobby, almost figurative; subtle color shifts (from cherry to fuchsia to pumpkin) within a single spill-like shape give it an introspective depth. Three stars! This is my pick of the show. 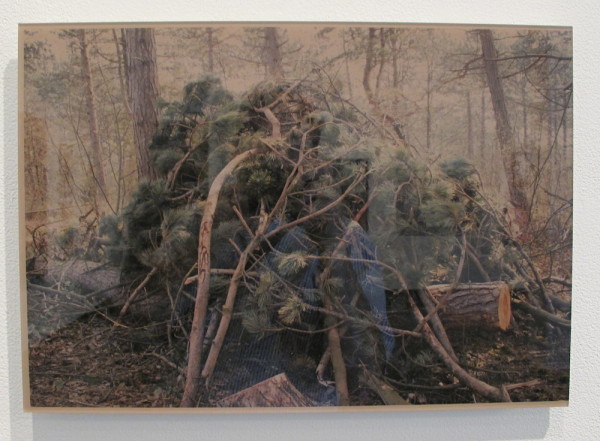 Mirelle Schellhorn‘s A Pile of Wood #12 is a frank c-print of a felled and limbed pine tree in a forest. Tinted as if seen from behind sunglasses, or at twilight, the innocent woodpile slowly develops a beautifully understated Lovecraftian horror. 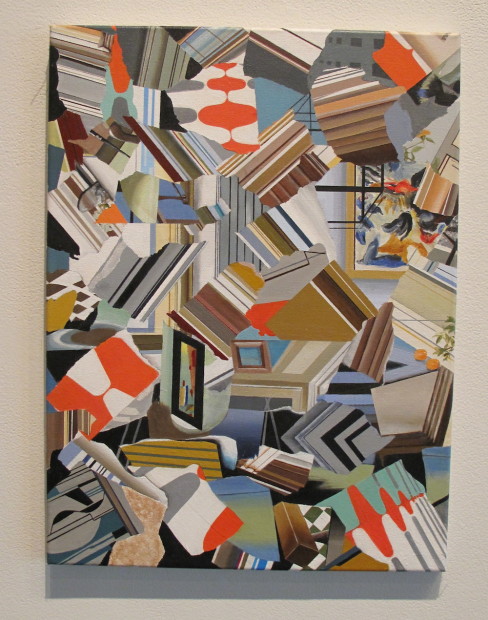 Penelope Ross’ The New Forty is an exercise in disorientation. A bewildering maze of disjointed moldings, walls, and windows on what appear to be scraps of paper torn from Architectural Digest are actually a trompe l’oeil painting of maniacal fussiness. 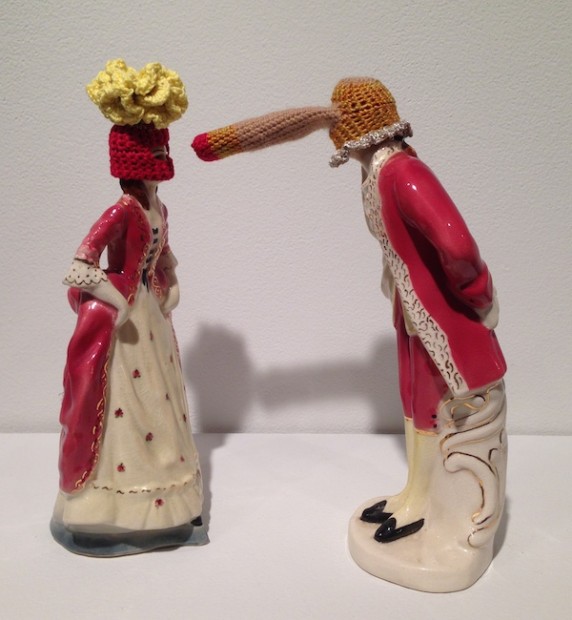 In Elaine Bradford‘s I See You, two readymade porcelain figurines enact a courtly pas de deux while wearing intricately crocheted headdresses that foreground the sexual nature of their polite mating-ritual poses. This is one of the best pieces I’ve seen from Bradford, a well known Houston artist; earlier pieces were sometimes simplistic crocheted taxidermy; this one pulls in anthropology and a bit of humor as well. 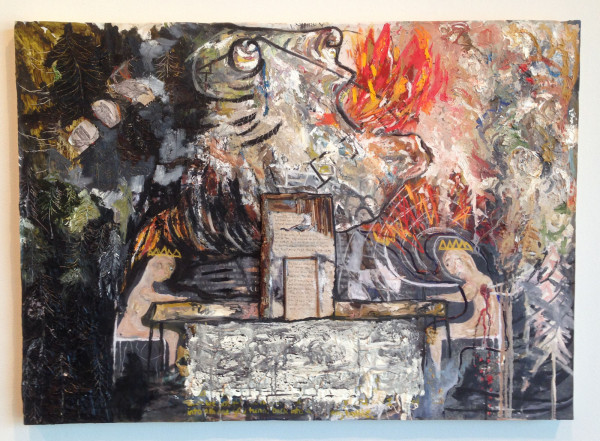 One of the things the Big Show does well is showcase one-off whimsies, like Avril Falgout‘s prize-winning goth metal homage sculpture from 2013 (Falgout, by the way, is now the wunderkind of Beaumont- she quit high school early to attend Lamar University) I liked Jenn Fox‘s Last Supper in the Burning House though it isn’t a good painting. It’s confused, dark, poetic, expressionistic, ugly and obvious, but it has some of the awkward mania of true conviction. Who would collage pencil drawings of vultures onto an impasto forest? 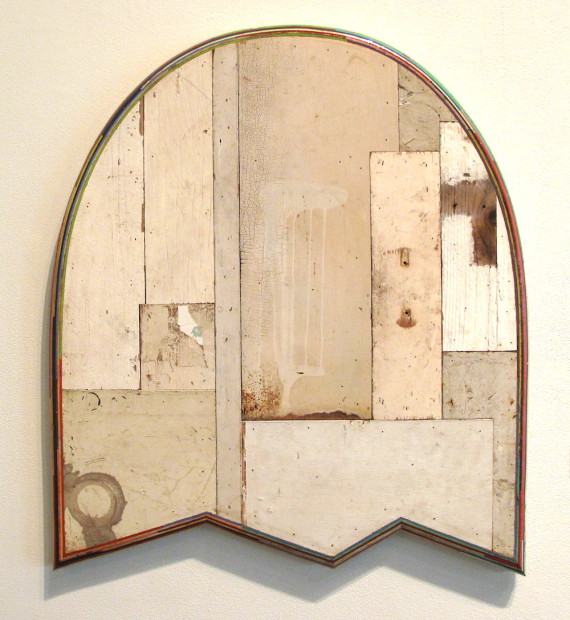 Big Show veteran Patrick Renner‘s Spectre is a wooden collage shaped like an arched window or a Pac-man ghost. Old wood is always interesting, and Renner’s sensitive craft allows stains, nail holes and patina to do their thing. His piece is the best of a large-ish group of “craft project” pieces in which artists in love with their materials or manufacturing are stumped for content to hang them on. Unlike most, Renner has the sense to keep it simple. 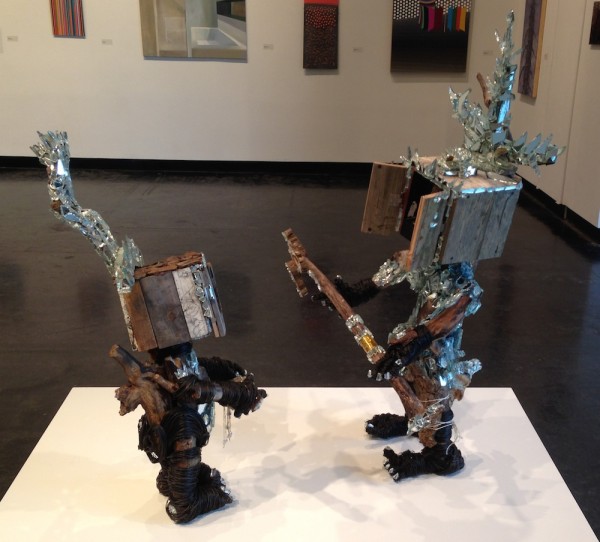 Mack Bishop III‘s Earth Child One and Two are folky spacemen cobbled from driftwood and broken mirrors, interesting for their material gusto, if not for their big ideas. 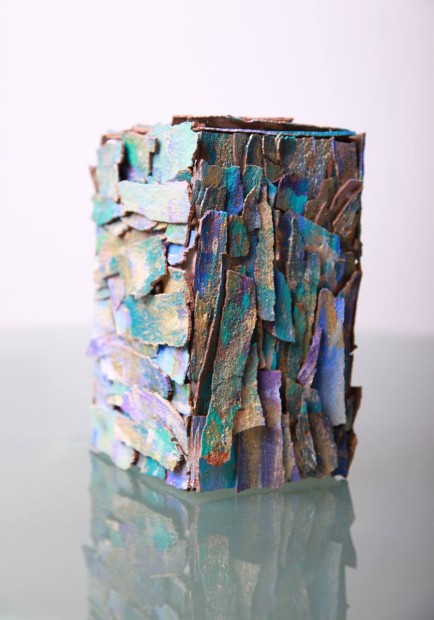 Eva Graf‘s The Cube is another curious craft project, a mini-minimalist sculpture covered in pieces of carefully painted tree bark, in decorator shades of iridescent blues and gold, as if it were a designer scarf. 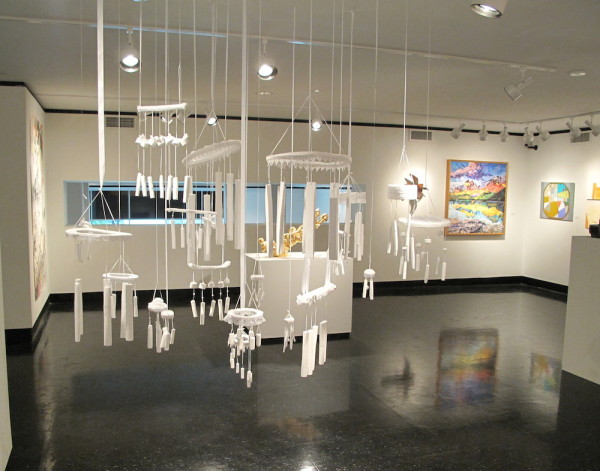 Sculpture’s not much in a show where you’ve got to cart in the actual work for jurying, but Laura Pregeant, one of the award winners, had the right idea. Her space-filling multipart mobile is made of foam, would fit into a milk crate, and probably weighs all of three ounces. It has a ghostly wedding cake prettiness, but is essentially a silent seashell wind chime. 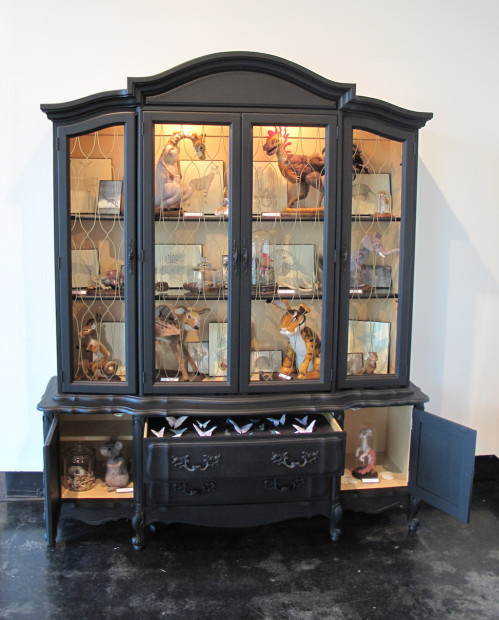 At the other end of the scale, Torie Shelton‘s Wonder and Curiosity is big, heavy, and labor intensive. The effort to bring it in, let alone make it, ensured it a spot in the show. A tall, glass-fronted cabinet of curiosities displays pencil sketches and altered photos of outré wildlife, alongside lovingly needle-felted plush toys like joke taxidermy: a rabbit-eared tiger, a giraffe-necked kangaroo, and a dinosaur-crested chicken. Drawers below display intricate cut-paper insects. Cute, but the elaborate display puts too much pressure on what could be engaging, lighthearted stuffed animals. 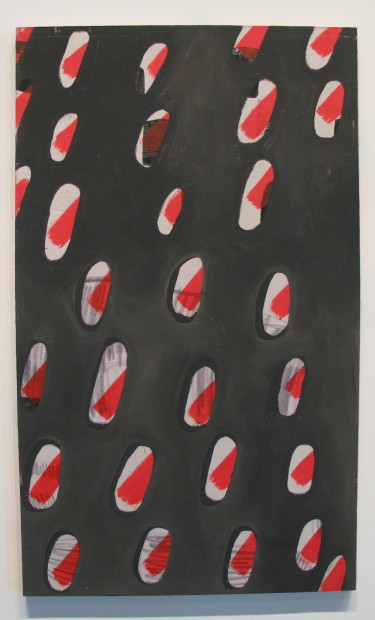 Painting is, as always, the biggest part of the Big Show, but when viewing this crowded installation, you need to work to take the things you’re looking at seriously. Taylor Smith‘s wallpapery cheese grater painting is easy to overlook. It relies on an odd trick: the foremost layer of his painting is a dull black surface full of holes. The layer underneath, though not much more exciting, is half-hidden, and the combo gains interest by tickling the innate human itch to peek. The list of materials includes iron filings and limestone. It’s vertical format and low-pressure formalism reminds me of Jeremy DePrez. 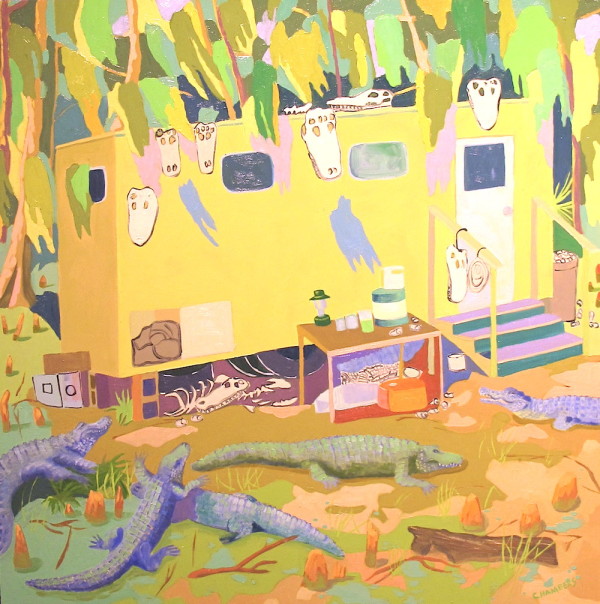 Lindy Chambers‘ Gator Man skates close to a Cajun joke, depicting a swampy trailer home festooned with alligator skulls. More alligators pile up in the yard, but I’m paying more attention to the surefooted, loose-jointed paint handling and odd color choices. The blobby moss-hung trees in the background are more interesting than the gators themselves. 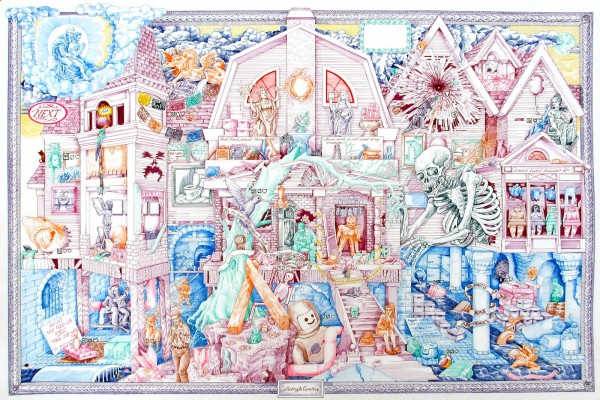 Christopher Wallace‘s Curating and Collecting is an intricate multicolor pen and ink drawing that lays out a narrative full of signs and portents, part haunted house, part museum. It’s a little incoherent, but as full of charming details as childrens’ illustrator Richard Scarry’s cross-sections of castles and ocean liners.

With so many works to hang in Lawndale’s Main Street building, Elder organized the show a little like a department store, with works hung in loosely themed areas. There’s a “face” wall, a “flower and housewares” department, a “geometry” wall, and a “collage” wall. The few lonesome sculptures lie on the floor like children at naptime. And Jenn Fox’s board with the dead duck nailed to it. You can’t beat a dead duck. 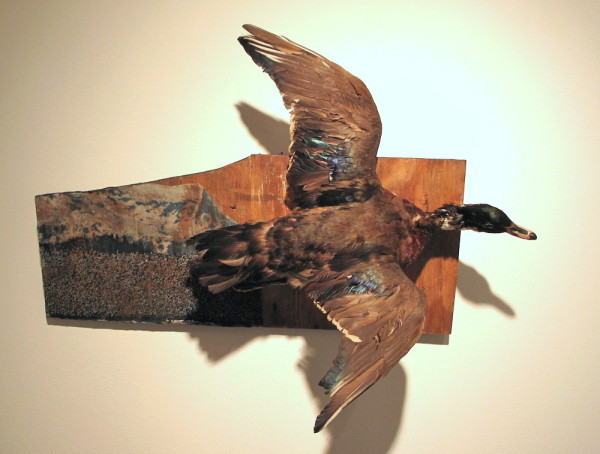 Artists: Get Paid to Show Your Work at...

Thank you Bill! What about Jeff Jennings’ ship painting and Lillian Roberds’ 2 Abstractions? Those are my favorites.