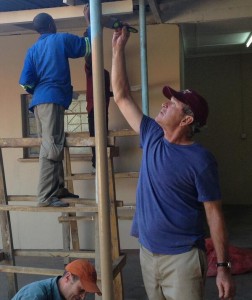 Former President George W. Bush and Laura Bush were recently in Zambia and spent a couple of days helping to renovate a clinic, which will serve as a cervical cancer screening and treatment center as part of the Bush Institute’s global health initiative.

So far, the subjects of the former president’s newfound painting hobby have been pretty much restricted to dogs, self-portraits, and landscapes. While at the clinic, his artistic eye led Bush to suggest an area that should be painted white and began the project himself. When he realized that there was no way the job could be finished in time, reports The Dallas Morning News, he pulled out the power washer and couldn’t help himself from making the outline of a giant “W.”

There are no reports yet that he has begun working in a graffiti style, but he does seem to be perfecting his tag. A few hours later, when almost no one was looking, Bush brushed a couple of “W”s on two doors waiting to be painted. Stepping back to admire his handiwork, he proclaimed, “W strikes again.”