A Romanian court has sentenced the hacker known as “Guccifer” to four years in jail, reports Reuters. The former cab driver, whose real name is Marcel Lazar Lehel, has been hacking into the email accounts of politicians, business leaders, and celebrities worldwide for years, and released documents to the website The Smoking Gun claiming an amazing array of victims shortly before his arrest in January. 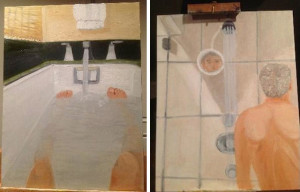 Guccifer shot to fame last year when he released images from email accounts of the family of George W. Bush. The hacker outed the former president’s newfound artistic ambitions by posting his paintings of pets, landscapes, and his own naked self. Bush told Today Show’s Jenna Bush Hager (his daughter), “It’s an invasion of one’s privacy. And yeah, I was annoyed,” though it led to an exhibition of his portraits of world leaders in The Art of Leadership: A President’s Personal Diplomacy, on view until recently at the George W. Bush Presidential Library and Museum at Southern Methodist University.

Despite being responsible for forever etching images of the unclothed ex-president into the minds of American art lovers (and it should be noted that some art critics are big Bush fans), no mention of the hacker’s activities in the US was made in court. An official at the Romanian general prosecutor’s office told Reuters that the office had no knowledge of any extradition request for Guccifer from the United States.