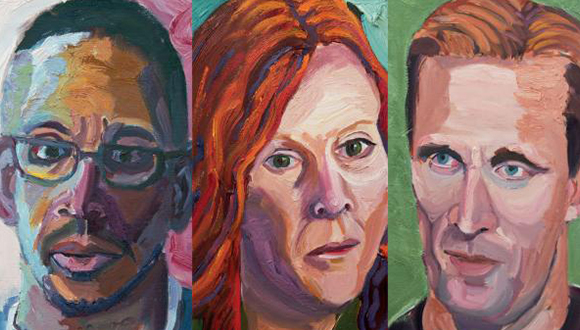 The Houston Public Library will host Portraits of Courage: A Commander in Chief’s Tribute to America’s Warriors, a collection of painted portraits of military veterans by former president George W. Bush. Some of the veterans will be present to autograph copies of the Portraits of Courage book at the show’s opening reception, February 27,  6-8 PM (more on that below).

Glasstire contributor Rich Lopez reviewed the exhibition when it was on view at the Museum of the Southwest in Bush’s hometown of Midland, Texas in 2018. Lopez writes:“Portraits of Courage presents an odd viewer experience. Bush sets out to honor these men and women, and he does. Each painting feels like a love letter to their service. And he captures distinct moments in some of their faces. But at the same time, it’s difficult to come away from the show with a deeper sense of who any of them are.”

Was this a common critique? The Portraits of Courage book includes each veteran’s story alongside their portrait, and the press release for the exhibition states that viewers will learn “the stories of each of the warriors featured in the exhibit, glean an appreciation for the service and sacrifice of those who serve in the United States military, [and] understand the impacts of the wounds of war — both visible and invisible.”

Again: Military veterans will be present to autograph copies of the Portraits of Courage book at the show’s opening reception, February 27,  6-8 PM. Refreshments will be served, and musicians from UH’s Moores School of Music will deliver a performance. The exhibition is free and open to the public, and will run from February 21-April 25.