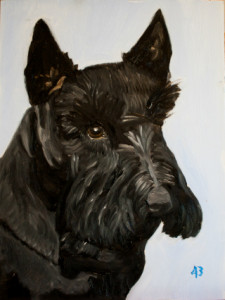 The former President’s portrait of Barney Bush (2000-2013) will probably not be included in the exhibition of world leaders, although a few conspiracists believe Barney may have served as a mascot for some sort of “shadow government.” It is rumored that, like both Presidents Bush, he was a member of the secret society, Skull and Milk-Bones.

Some people have been following George W. Bush’s recent painting career with a bit more affection than they did his political career but, with last month’s reported arrest of the notorious hacker Guccifer, there were some fears that the public would no longer have access to the former President’s artistic journey. Guccifer was the original email hacker who released images of Bush’s self-portraits in the shower, pet portraits and the occasional landscape. A few months ago came the interesting announcement that Bush was working on a series of portraits of world leaders but, without Guccifer, would we ever see them?

On Monday, the George W. Bush Presidential Library and Museum sent out a press release announcing the exhibition of The Art of Leadership: A President’s Personal Diplomacy, which will open in early April at the Presidential Library, located on the campus of Dallas’ Southern Methodist University. The show will feature more than two dozen never-before-exhibited portraits painted by Bush, along with artifacts, photographs, and personal reflections which “will explore the relationships that President George W. Bush forged with world leaders to shape international policy and advance American interests abroad.”

I would like his work much better if it was outsider prison art.