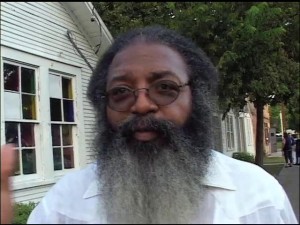 Houston artist Bert Long has died. A Houston native, Long gave up a career as a chef for art in 1979, eventually becoming one of the city’s best known and best-loved icons. Huge and hairy, Long’s presence in person matched his stature in the artworld.

Self-taught, Long’s determination and gall carried him forward. His first art show, at the MGM Grand Hotel in Las Vegas, where he was executive sous chef, was arranged to enhance his culinary glamour; but Long had found a new calling. Struggling to make art and feed his family, Long continued working in restaurants in Chicago and Houston for several years before finally devoting himself entirely to his art in 1979.

Showing around Houston wherever he could, Long attracted the attention of Jim Harithas, director of the Contemporary Arts Museum, Houston, and artists John Alexander, Salvatore Scarpitta and James Surls as the city was first defining itself as an art center. Long was included in the MFAH’s seminal 1985 exhibition of Houston art, “Fresh Paint,” winning a National Endowment for the Arts Grant in 1987, and then the presitigious Prix de Rome in 1990, cementing his unusual status as a bridge between outsider and academically trained artists.

The 90’s saw Long living and working extensively outside Texas, maintaining studios in Rome, Italy and Berzocana, Spain, with occasional visits home to Houston. Long moved back to Houston’s Fifth Ward in 1999, taking part in Project Rowhouses’ movement to use art to revitalize his old neighborhood, where he lived with his second wife, painter Joan Batson, in a pair of reconfigured shotgun houses. There, with Joan at his side, he died peacefully this morning.

In the wrap-up to Kelly Klaasmeyer’s 2006 Houston Press article on Long, from which most of my biographical details have been cribbed, Long reflects on his career: “I don’t want to forget where I came from. I don’t want to forget picking cotton as a child… and I don’t want to forget sleeping in a trailer with ice crystals on the windows and being separated from my family.” But he adds, “I do know this, I’ve been truthful to what I do.” And in a wry nod to Frank Sinatra, the former Vegas chef says, “At least I can honestly say, ‘I did it my way.'”

A special screening of “Bert,” a new documentary exploring the life and art of  Bert Long, Jr., will be presented by the Menil Collection, Houston Museum of African American Culture, and Houston Cinema Arts Society Thursday, February 14th, 7:00 p.m. at the Menil Collection.

Bill, Kelly and everyone at Glasstire

Thanks for posting Bert’s passing so quickly. It is a sad day for all of us who knew and loved him.

We are showing his exhibit Bert L. Long, Jr.- An Odyssey, at the new UAC Contemporary Art Gallery at Houston Baptist University which opens on Thursday February 28th. 6- 8 pm. It is an exhibit I was working on with Bert, and one in which he particularly wanted to include works from his own collection, most of which have not previously been seen in Houston. I will send a more formal gallery announcement in a few days

Thanks, Jim, for letting us know. I’ll be there.

what a tremendous and colorful guy. i remember bert with a chain saw and huge blocks of colored ice on the shores of town lake in austin (1980?) before i lived here and we were both living in houston , before i had even conceived of my first art piece. i remember being inspired by all that color…around bert, (around his neck) in the air. he chatted with me all smile as if we had been friends for years. im happy that later became true. back into the soup of the ever constant consciousness keeping things spicy.

Bert as a true renaissance man….he lived five years into the future! He will be missed by many.

An amazing artist and a gentle soul, Bert Long Jr. will be remembered fondly. May peace fall over his friends and family during this time of sorrow.

“I do know this, I’ve been truthful to what I do.”
Essential Bert; I can both hear and see him saying this, as he was a life as art himself.
His passage is our loss. I am honored to have known him. RIP Bert.

I am crying as I write this. I met Bert when Alison Cook and I had him create a large ice sculpture for the front of a Texas Monthly magazine featuring BBQ.
He was huge and jolly and I loved him immediately.
My first thought was to tell Casey that Bert died, but then how ironic that Casey died just one month before to the day!
I miss them both.
Jo Ann Williams

Jo Ann, you and Joan are both in all of our hearts right now. Hug.

My first introduction to Bert was creating the invitation for his announcement as Art League’s Texas Artist of the year, gold on black. I recall he kissed me on the cheek then and thereafter everytime I saw him for the next 20 years. His art was monumental and personal at the same time.

I met Mr.Long about five years ago and from that day forward we have been best of friends(but who couldn’t be friends with a great man as Bert)even thru rough times he never lost his sense of humor—u will be truly MISSED AND LOVED—DEBORAH DOYLE CARTER AND FAMILY

I do not even remember how or when I first met Bert. Since it seemed like there was always Bert Long, by the time we met I thought I’d already met him many times. My best “Bert Long privilege” was running the panel that selected him and then serving as project manager for the 2008 Looscan Library public art commission for which Bert painted a 7’X30’ long mural sized oil on canvas painting called Art/Life. He painted it over a year and a half in rented space with his canvas pinned to a custom-built-for-the-project wall, built by Dan Schnorr in Dan’s warehouse on White Oak. The wall spanned almost the entire width of the warehouse. Bert occupied the front ¼ of the building from the front door to his wall/artist’s easel. I visited nearly every week to watch his progress, and sometimes brought with me people like Toby Kamps who served on the panel that selected Bert, Linda Shearer when she was at CAMH, Issa Dadoush when he was director of the City’s General Services Department (anyone with the City knows his importance). Bert loved an audience and held court, served refreshments, talked about the painting, and took pictures of everyone. In the middle of the project he built an ice sculpture outside the front of the warehouse and held an art opening party for both the ice sculpture and his painting-in-progress inside. Since the warehouse was situated right up to the sidewalk and the ice sculpture was on the sidewalk, the party stood in the lanes of White Oak and oblivious to traffic narrowed the street down to one lane. There were some big moments but there were little moments too, like looking forward to seeing which medallion he would be wearing around his neck that day. My favorite was the one with the eyeball in the middle, which he wore most of the time. The project was a privilege to be part of and fortunately I was aware of it and grateful for every moment as it was happening. I send this message with love to Joan Batson.

I will be praying….for Bert and his family

I remember Bert and his large pesence . I met him when he first entered the art world and was making a print at Little Egypt. Everyone was skeptical of this “artist” making a print of broken glass. he was special and his conviction was infectious. he rose to the top and I recall visiting his opening in NYC.
I also remember that he always wantedd a little kiss which was sweet and special. May he rest in peace and be remembered for his unique talents. we love you Bert

This has been a very poignant month – to have lost Casey Williams, Bert Long and Tejas Englesmith seems like too much. Our love to each of their dear ones.

There will be a memorial/celebration of life/party at the Magnolia Ballroom, 715 Franklin at Milam, from 8:30-11 p.m. on February 28, following the opening of the “Bert L. Long Jr.-An Odyssey” exhibition at Houston Baptist University’s Contemporary Art Gallery.

15. When I first approached Bert to co-curate “Another Reality “with me in 1989, I did so, because I felt his work exemplified the best of the magic in Texas Art. Bert accepted to work with me only after he was convinced that we saw eye to eye and shared a vision of what we called “Another Reality” in art., Our road trip to 68 artists studios was an unforgettable “magical mystery tour”, which took us as far as Sherman and Paris, Texas! ,,Most of all, ,I will cherish Bert;s genuine, insightful, and totally unprejudiced approach towards other artists. Once he made up his mind that he liked the work, his loyalty and nurturing support sealed a friendship with a noble “Bert Long touch” that was so uniquely his. Thus, Bert was not only a great creator himself but he was a beloved mentor of many emerging artists who will always remember his gifts with deep gratitude..