“What is the name of that landscape painter.  You know the one I’m talking about; the one who painted atmosphere like uh…like Corot.  If I call his name, you’ll know who I’m talking about….”

I grew up in the ‘hooraw’, cut my teeth with men who truly knew how to ‘put on dog.’  I knew the name he was after, Robert Stuart Duncanson, and so did he.  Goddammit!  He then put forward his thoughts on the parallels between Horace Pippin and Carl Andre.  That was the first time I had ventured over on Buck Street to interview him about his upcoming show at HMAAC.  Found out real quick that if you were too polite, wavered a little bit, took too long to answer or comment you would find yourself being interviewed or lectured.

Joan, of course, could get him back on point with simply, “Bert.”  I’m sure Connie exercised the same kind of latitude.   And of course his mother, whose caveat leads the long line of stories we all have about him, is my all-time favorite. She told him when he was very young, if he did not stop asking so many questions of the Almighty, one day he was going to find a lightning bolt aimed straight for the top of his head.  i.e. ‘Lawdy, Lawdy, I’m Beginning to See the Light’.

Didn’t do any good.  Bert always questioned, weighed, engaged, PRODUCED.  Undeniable in his painterliness, his sensibilities, unyielding in the way he saw it, his nerve.  Never afraid of falling down like Woody Allen encouraged.  Part of the enigma is that he could handle paint so damn well, and many wondered, why squander such a behemoth talent on work that seemed 2 steps away from FOLK.

Let’s be candid.  It’s the collusions.  Those in fact are the things people find so troubling about Bert’s work. Ugly Beauty.  Descendants of bondsmen have a way with the uncomfortable, you have to be adept at fusing things together, piece meal this and that.  Cant’ run away from the truth. 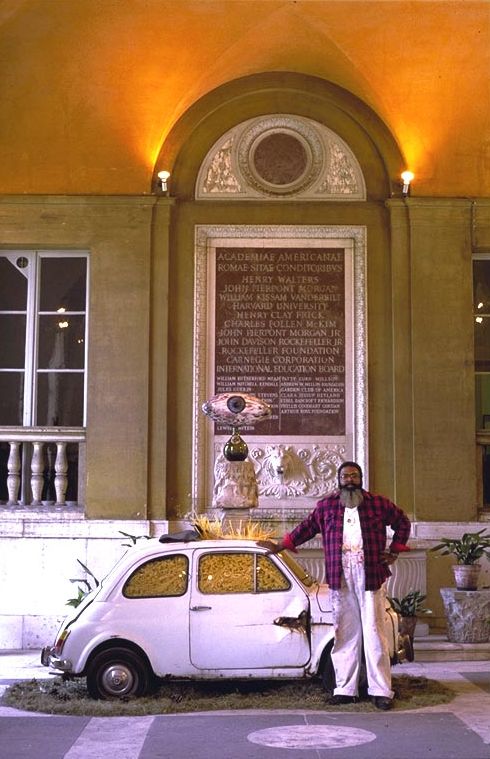 At Black ‘Home Goings’ you are given two minutes invitations to remember and reflect upon a person who has moved on to the ‘other side’.  Here are mine.  So, who was Bert to me?

He was our latest version of Damballah.  The necessary things your mother imparted about  making it in this life. Love and Desire.  The ability to laugh at yourself and others, often. Courage.   Belief of Self.  Belief in ‘The Game’.  He was a man of the people, of all the people. A Djali in bib overalls, a poor boy from 5th Ward Texas who was just like his home state − restless, proud, BIG and sentimental.

He was a ‘self taught’ artist who happened along when that kind of heading was on its way out.  Empty pockets would return him a number of times to the kitchen.  Yet he was ate up with something else, ravished with the need to create. For those of you that need the bread crumbs, for often times the woods are dark and unsure, here goes.

Bert’s art was a mixture of rebellion and vision.  Many moons ago he kicked to the curb the need for decorative harmony, and to a certain extent, visual familiarity.  Like Ernst, he made it his duty to wed the fascinating and the disturbed; so many styles, running all on top of one another.  An alchemic rendering of Surrealism and American realism, all stitched in an Impressionistic thread often times infused with African sculptural elements.  And that was just the paintings.  His performances, sculptures and photography are worthy of cottage industries in and of themselves.  He was slashing, big time, before it was really cool.

Besides the obvious, (young man could handle paint) his power, for me anyway, was his refusal to ingratiate, to cajole on any level.  More times than naught he was over the top, Barnum and Baileyesque, pimped out in hyperbolic episodes that either made you laugh and shake your head, file an inimitable thought away for future contemplation or turn away thinking, ‘Damn Bert.’ Rarely did he pull punches.  His art was past confrontational.  Often times it humored.  Hardly ever did it play fair.

His canvases seemed to bear witness to the struggle between the illusionary aspect of the painted image and the physical presence of the objects within the frame.  And neither shrank from this ongoing struggle.  His frames were muscular and visceral extensions of his ideas, teetering between ofrendas and altars, brow beating you within the scope of their vision.  The eyes, the mirrors, the objects encased to the frames and canvases took on the accumulative aspect of African sculpture.  The accumulation of the materia empowered, spiritually validated the pieces.  Bert, the ole African, knew the reception that awaited this burlesque array of ‘fetishes’.  They hollered loud, ‘Them’.  They represented forays to cultivated Western sensibilities.  They became an easy and traceable line to FOLK. 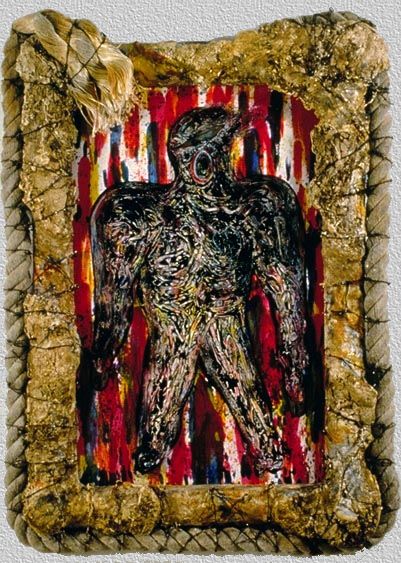 His art was about ‘da spirit, sans of course, church or museums.  The ephemerides that sizzle up in the middle of a cotton field or in the revolving door of the kitchen bring with them their own authority, their right as rain clarity.

Let us not forget his Peeps. His eyes to me were always an assimilative construct of Emerson’s eye, the African ejubejailo, the masked face that means ‘the face that brings fear to other faces’, usually shaped like an egg, which good curanderos utilize to fade all haters and naysayers. More in and out, out and in their Janus-like applications, they not only questioned what you looked at but what you say, which of course if a reflection of the mirror of the self.

I cannot lie. I did not like the photograph front page of The Chronicle.  Too gothic, too dramatic, too straight ahead.  First of all, this is the same dude that drove Van Gogh’s brain all the way to Phoenix.  The same Bert, who Beth Secor and Bert Samples recalled to me, was almost involved in a terrible accident involving a mule, a wagon and a dramatization of the need to keep the arts alive at Lawndale back in the day.  I can see him shaking his head and chuckling. “We all got to go that way.  Listen, listen…isn’t that what the preacher says, ‘we all got to go that way’.  He’s right you know.  You’ll be alright.”

He was always calm about his place in all of this.  I am the one who carries the doubt.  When are you going to learn?  I cannot take the emptiness that I carry inside of me and scatter it to the open spaces.  The air is far too dank    I refuse to be quiet because I have seen the phoenix-like spectacles, then the ashes swept quickly away.  These trite rituals do nothing for my belief.  With his passing a tawdry modicum of remembrance for a man who gave so much of himself to this city, state and region.  In the library?  How many damn people go to the library at museums? 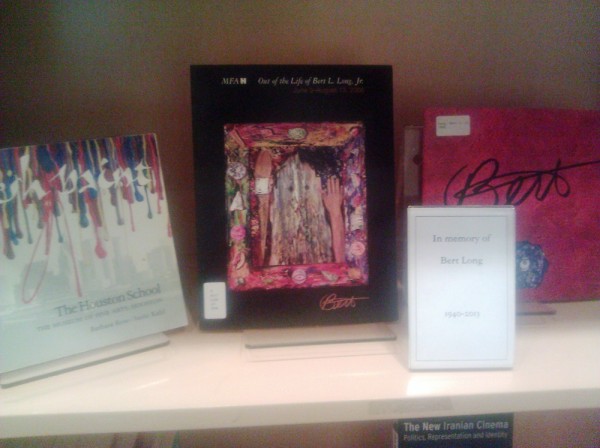 I remember asking him after the interview to lend me the catalogues of his shows so that I could get a better feel for the progression of the work. He was silent.

Bert: There are no catalogues.

GR:  What do you mean there are no catalogues? Look man if you don’t want me to have them, just…

Bert: No it’s not that.  There are none.  See that’s one of the perceptions about Bert Long. There are many. The perception that he is rolling in the dough, that he is at the top of his game, that there is documentation out there concerning him.  But there is none.

Have heard museum directors and curators talk about his importance, his place in all of this and when one looks around for the Articles of Validity and Worth, the catalogues, one finds nothing.  Nada.  9 solo museum shows and nothing. So how should one chart the exclusion of this important variable in the story of this important artist?  This question should be not asked in lieu of the funding necessary to produce a publication.  Has more to do with the commitment of an institution to the artists they present; a very telling litmus test. The capacity of an institution to put together a coterie of curators, writers, graphic artists, select a publishing house, is well, what they do.   And before you fix your mouths to say anything, brochures and gallery notes, though thoughtful, no, they do not count.  Sent for you yesterday and here you come today.

The placement of Long’s work within the real conversations about Texas artists, those conversations between curators and private collectors, patrons and corporate collectors is the big issue here.  No need to point me in the direction of those institutions and collectors that have important pieces of his in their collections.  I got that.  This is about something much more permanent; an immediacy that comes from the document, the catalogue itself.    Bert confronted this exclusion, which is really, the American Cultural Kleenex Syndrome, long ago.  It’s chief nemesis, ‘The Bert Book’.

“I am not going to get ripped off.  At least my story is here and it won’t get lost. I put everything in there. Good or Bad. It’s important for people to know what happened in an artist’s life.  The images can stand for themselves.”

Yeah I get the notion of transvaluation that Bert was attempting to connect with his own work, just think he deserved better.  That is why I wait with great anticipation for Thomas McEvilley’s essay

Excerpt for our interview.

Bert returns from the bedroom with a fairly thick manuscript. He shakes it in front of my face.

GR: Yeah, you told me about that.

I had only known Bert for a little over a year.  Met him at Robert’s opening in Beaumont.  Have no idea why the Almighty placed him in my path.  Glad it happened. Period.  I expect people who have known him longer and more intimately to be forthcoming.  See how ridiculous and uncomfortable those two minute invitations can be.  Uncomfortable but necessary.  Very, very necessary.

See you later Bud, further on up the road.

That’s a really beautiful piece, Garry. It kills me that Bert never had any catalogues of his work while he was alive.

very nively expressed the beloved soul of Bert lives in his work. thank you for your well written expression

We all went to the El Dorado and supported the effort to fund a book about
Bert Long. We were jubilant in the thought that we would be part of the effort to show Bert how much he meant to our world. We gave so little for someone who has given so much to so many.

I think you should hold on to that ‘jubilation’ you and everyone else experienced that day Jo, and realize that if we could done more we would have. The one thing that would please Bert would be to see the culmination of that fund raiser, his prize, his book. Maybe some generous person or institution will step forward to realize Bert’s dream. I have a dream….

I only met Bret a couple times, wonderful man. Beautiful writing dad! So late to read your writing sorry. 🙂