Notes from Gotham: What I saw in NYC Galleries

I had 24 hours in NY last month and spent most of it going in and out of the enormous, heavy glass doors of Chelsea galleries (and the confusingly center-hinged door of Comme Des Garçons, in which dear husband nearly got stuck). Even with a firm commitment to see everything in the neighborhood, I still didn’t get to all of it. But here, by way of a mental house-cleaning, are a few of the shows to which I did manage to schlep my not-used-to-walking-so-much, good-god-it’s-hot-why-did’t-I-wear-my-birthday-suit-today self. In brief: lots of gluttonous summer group shows from which I recall only a little, with a few quieter, more digestible highlights that I can’t get out of my (very cluttered) head. 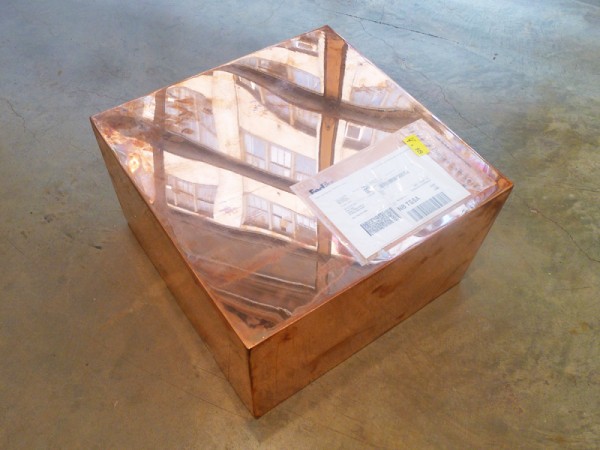 James Cohan, Everyday Abstract–Abstract Everyday. The two stand-out pieces from this enormous show about,  according to curator Matthew Higgs, “the complex entanglements between non-representational art and everyday life,”  were Hannah Wilke’s chewing gum reliefs from 1975, with the gum all aged to a hard and molted brown, and the oxidized copper box by Walead Beshty that was shipped FedEx overnight from LA to NY and is covered in the thousands of fingerprints of all the hands that touched it along the way. Walead’s box was a wonderful foil to Donald Judd’s brass box at MOMA which I saw later on, all shiny and unsullied and indomitably pure. (image via) 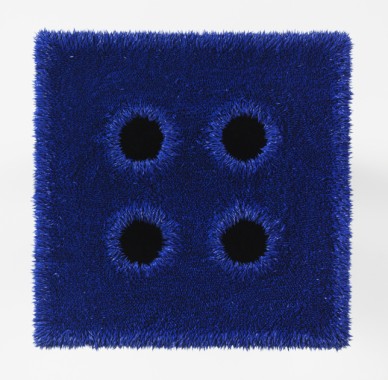 Galerie Lelong, Stretching Painting. Another big painting show, though much more spare than the one at Cohan. This one explored all that rough, ambiguous terrain where painting teeters over the cliff above sculpture and holds on for dear life as we all stand by, head tipped to the side, and say, “Ooo, that looks dangerous.” Not really. Stretched fabric that’s been partially unwoven and left to dangle in pieces by Gabriel Pionkowski were lovely, and reminded me a lot of Diana Molzan’s recent work. And then there were the confounding paint- as-porcupine concoctions by Donald Moffett which were anchored to the wall on thick metal piping which you could see into, like endless black tunnels, and like this piece by Lee Bontecou, also at MOMA, which had my 7 year-old enraptured in wonder at its black void. (“But where does it go…?”)

Luhring Augustine, Painting in Space. Tried to go see this show because it had a star-studded cast of artists, but the giant metal awning was pulled down, closing up the gallery. It was the day after July 4th (also know as July 5th), so maybe the Augustine part of the operation was still off with his lady friend Marguerite Hoffman in the Hamptons, or where ever it is jet setters set off for in jets. 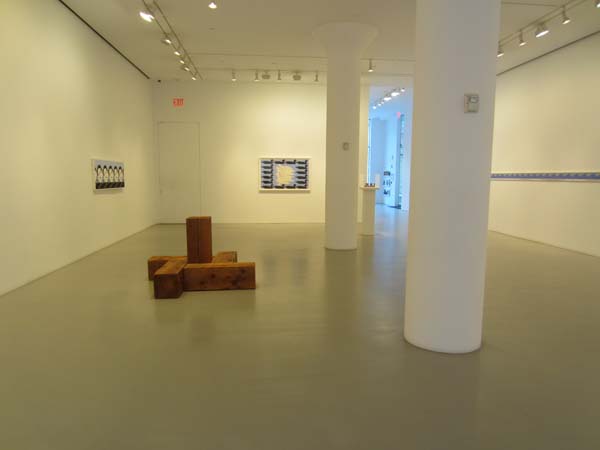 Mitchell-Innes and Nash: Carl Andre/John Wesley: Serial Forms. A delightful show. Simple connections between simple work. Andre’s wood and steel serials felt like giant toys when coupled with Wesley’s bright, pop animals and figures. It made for a quick, catchy song, like a grown-up nursery rhyme. 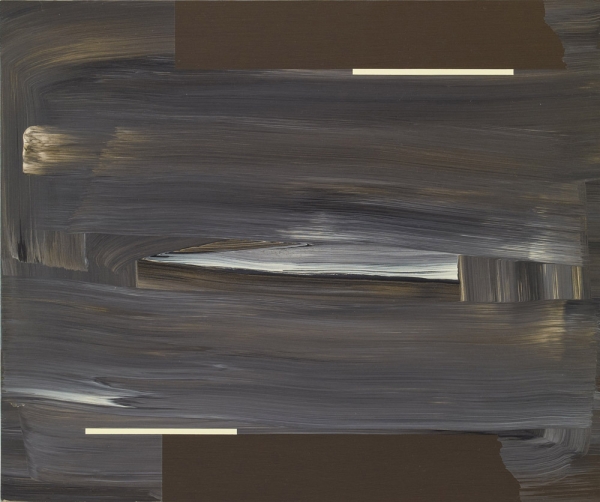 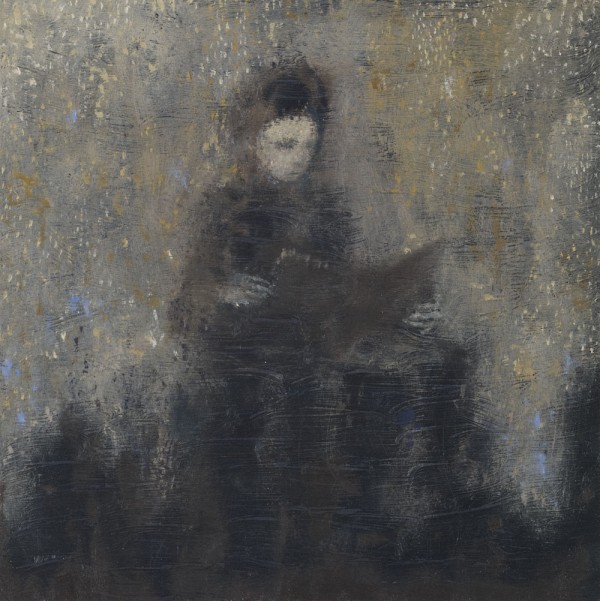 Sikemma Jenkins: The Big Picture. Small paintings, nearly all little worlds unto themselves, in a succinct, restrained show. Ann Pibal’s murky and just-enough pieces feel like looking into oil-slicked water or parts of deep space, but overlaid with the trappings of order — fractured lines, blown-up grids, flight trajectories. They might be perfect. Work by Jeronimo Elespe enters the same voids as Pibal, but conjures Whistler up out of them. 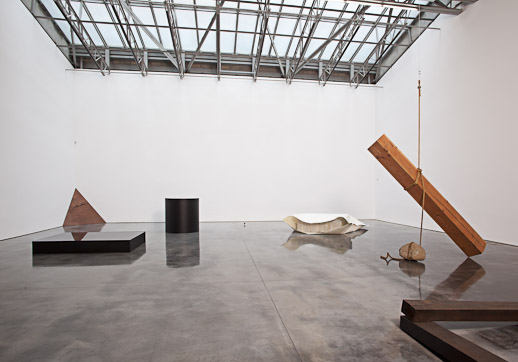 Mono-Ha: Requiem for the Sun at Gladstone

Gladstone, Mono-Ha: Requiem for the Sun. I was thrilled to see the work in this show (which was previously at Blum and Poe in LA), especially after having just come from seeing Nobuo Sekine’s work in Dallas. Clearly, this tiny 1960’s Japanese movement is having a revival in the upper echelons of the art world. So glad, because the work is a powerful antidote to so much of the cheeky, ironic crap being made right now. The big, impossible weight of these Mono-Ha sculptures, and the thoughtful yet intuitive use of nature’s stuff, reorients us to the endless poetic possibilities in the substance of the earth. It’s primal, and so refreshing. A 21-minute video by Noboro Takayama, in which, among other things, the artist leans against a row of vertical railroad ties, sending them falling like dominoes, is an overt yet open depiction of the  body’s relationship and power in space. There’s lots more to plumb out there in the world of wood and rocks.

Gagosian Gallery, Richard Avedon: Murals and Portraits . “Look, a peepee,” said my small son, pointing to the various limp penises of Andy Warhol’s Factory entourage in one of Avedon’s enormous photo murals, just before he fell asleep on my shoulder. Lots of larger than life Beat and Pop generation icons here.  The mean, uniformed guards from the Gagosian Empire, however, make the experience rather ironic. 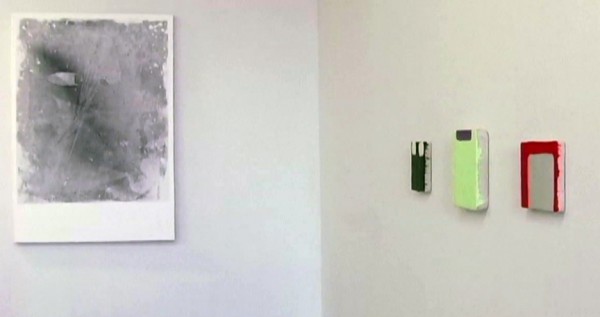 Et  Al Projects, Bret Slater and Jeff Zilm. Last but not least, there was the little show of work by Dallas artists Jeff Zilm and Bret Slater out in Brooklyn. The gallery was housed at the back of a big warehouse where not-so-promising artists share studio space and live out the artistic American dream of starving in NY. But Et Al Projects felt different than that, mostly because the young man running it, Adam Zucker, was not wearing a fedora, nor pants that were too short for him, and he looked us in the eye. He was running a real operation.  Zilm’s and Slater’s work together is a lesson in polarities and attraction — the rough edges of their disparate methods make excellent bedfellows.

Walead Beshty at The Power Station

Thank you for saving me the trip to NY. Et Al Projects sounds like a winner–good for Zilm and Slater, and good for Zucker for his showing of initiative.