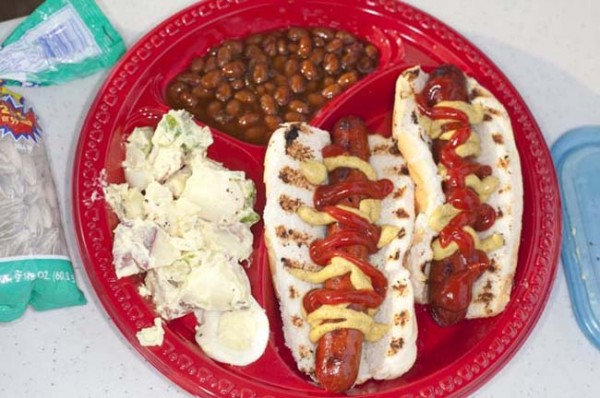 A picture of food from Martin Parr’s book, Up and Down Peachtree

Martin Parr’s newish book, Up and Down Peachtree, represents the South’s shiny capital with a mix of mean-spiritedness and generosity that recalls Richard Avedon’s long-ago treatment of the American West. As much or more then than now, the Western United States was the golden land that addressed aspirations of leaving the Rust Belt and other manifestations of decay behind. It was a land of affluence and trim, tan bodies, of people with university degrees who emulated all things Japanese and, as such, smart–this, having been the mid-1980s, when Japan’s economic bubble was inflating and Cali really started lookin’ to the East. Dismissing gorgeous bodies, achieved by way of wealth, Avedon searched out the estranged and disenfranchised, and enhanced their estrangement. 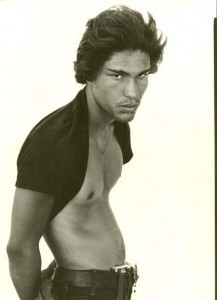 In harsh black and white, shot against his spotless white seamless, Avedon presented specimens of a failed dream or, perhaps more graciously, the reality that underpinned the dream. He photographed male drifter and laborers, and desperately proud women, some of whom put their best foot forward for his Rollei and others who didn’t seem to give a rat’s ass about how they looked. In the hands of the right stylist, for example, carnival worker Juan Patricio Lobato could have been used to sell Prada, but Avedon chose to show his feral allure in probable context. Proceeding as he did, Avedon flipped over the lie latent in so many of his chic studio pictures. He betrayed the gross inhumanity that underlies so much of what we cling to as civilization, and the hard-scrabble truth that shores up the comforts shared by visitors to Glasstire. 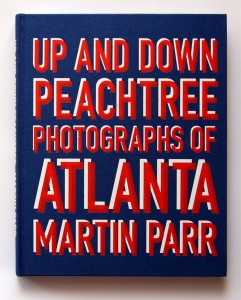 The cover of Martin Parr’s book says what it says.

As was the case with Avedon, Martin Parr was commissioned by a regional institution–Avedon, the Amon Carter Museum and Parr, the High Museum of Art, albeit along with two other photographers–and, in his images, pulls the rug out from under Atlanta as an emblem of all that is bustling, smart and trend-setting. Akin to Avedon’s baring the underbelly of the West, Parr reminds browsers of his picture book–there is very little text, and absolutely none to identify any of the subjects–of just  how motley the reality is. For the most part, Up and Down Peachtree dwells on the riff-raff whose world hovers at the edges of images of impeccable young parents dropping their children off in the carpool lane. Many of his subjects are snaggle-toothed individuals who haven’t an ice cube’s chance in hell of acquiring a Duke MBA and launching a successful start-up–to men and women who inhabit a permanent underclass of trash that has been spawning for centuries and only will continue to do so. When he does portray the aspirational and upper classes, he tends to hang them out to dry: although publicity for the book tries to emphasize Parr’s wit, what comes across much more keenly is damning critique. In general, Parr trains his lens on this profoundly Anglo, class-based society as he has done with other bodies of work, on his own side of the pond.

Perhaps it’s the morality latent in his own background, which seems to be of the working-to-middling class, that drives Parr to criticize the gloss of consumer culture–doing so by dwelling on the gloss. As widely recognized, he generally shoots in garish color and on the street. He siezes upon chaos, rather than reconstructing it, as Avedon so carefully did. His subjects rarely confront the camera, much less seem aware of its presence. Moreso than Avedon, Parr has his themes: chief among them is food–perhaps the most obvious expression of consumption, particularly when eating brings out the animal in his human subjects. And, of food stuffs, this book notably attends to corny dogs, those paradigmatic Southern snacks, those supremely fake phalluses, be they gnarly or oh-so smooth. 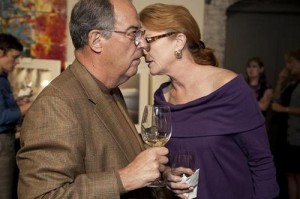 Ceci n’est pas un corny dog. One of several pictures of people talking, from Up and Down Peachtree.

Indeed, corny dogs are documented to the point of visual cliche, along with schmoozing socialites, black American churches and the pervasive legacies of those Atlanta-born phenomena, Ted Turner and Coca-Cola. Although Parr, to a point, addresses the importance of the city’s black population, his Atlanta is nothing is if not a pop-cartoon image of itself. Several of the things he records are cut-and-pasted out of their original contexts (shown elsewhere in the book) and displayed on opening and closing pages against backdrops of bright color. Overall bright, too, are the pictures. There are no cloudy, British days in Atlanta, just sunshine to the point of surreality. But, then, that’s likely Parr’s point.