by Bill Davenport May 16, 2012
FacebookTwitterEmail 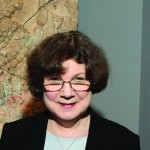 Carol Robbins, The Ellen and Harry S. Parker III Curator of the Arts of the Americas and the Pacific is retiring after forty-seven years of service to the Dallas Museum of Art. In appreciation of her nearly fifty years of Museum work, and of her renowned curatorial expertise in ethnographic textiles, Robbins has been appointed Curator Emerita.

Robbins joined the Museum in 1965 as the Secretary to the Director under Merrill Rueppel. She became a curatorial assistant in 1970, and subsequently served on staff within the DMA’s curatorial department, including the positions of Curator of Textiles and Curator of New World and Pacific Cultures, through her appointment as The Ellen and Harry S. Parker III Curator of the Arts of the Americas and the Pacific in 2006. She has been responsible for the Museum’s collections of ancient American and Indonesian art, which are of international significance, as well as the DMA’s Native American art collection. In particular, the DMA is one of the few museums in the country with a permanent collection of the regional art of Indonesia and Sarawak.