The Guerrilla Girls, Do Women Have to Be Naked to Get Into the Met. Museum?, poster, 1989, gift of the Kaleta A. Doolin Foundation

In recent years, works by the New York-based feminist collective the Guerrilla Girls has reemerged in group shows across the North Texas region: the group was represented in the Dallas Museum of Art’s 2017 show Visions of America: Three Centuries of American Prints from the National Gallery of Art, and the collective also had a room of documentation and ephemera at the Modern Art Museum of Fort Worth’s 2014 exhibition Urban Theater: New York Art in the 1980s. Members from the Guerrilla Girls have also traveled through the DFW area, giving talks at the Dallas Museum of Art and at Texas Women’s University in Denton. Even better, Texas A&M University’s Wright Gallery had a show in 2016 of protest posters the group made from 1985 to 2000.

If you’ve missed these recent shows and talks in Texas, or if you simply want more feminist protest art in your life, you can visit the Dallas Museum of Art’s current show The Guerrilla Girls, on view until September 9th. Paired with two other shows highlighting women artists from the museum’s collection (Soft Focus and Body Ego), The Guerrilla Girls features works created between 1985 and 2016 from the group’s Portfolio Compleat series. Many of the posters in the show were recently acquired by the museum as gifts from the Kaleta A. Doolin Foundation, an organization dedicated to creating “equal representation for women in the arts through museum acquisitions and public programs.” 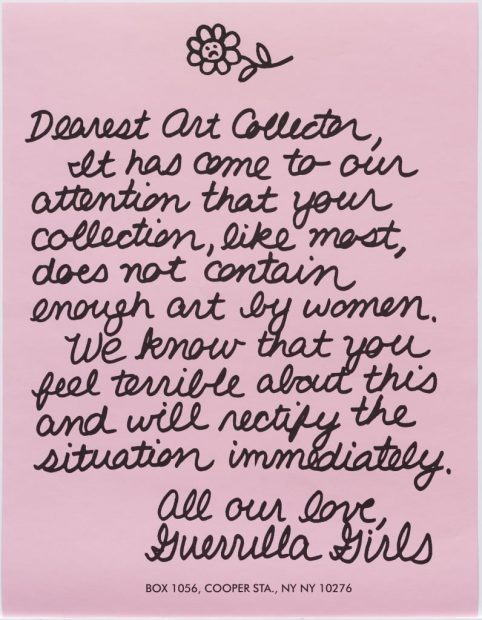 Later this fall, the Guerrilla Girls will maintain its presence in Dallas with a “non-commercial exhibition” of poster works installed throughout the popular Texas Theatre in Oak Cliff, including the Theatre’s second-floor Safe Room gallery space. Organized by DFW’s CYDONIA Gallery, the show, Battle Cry, will run from September 7th to October 28th. A bit about the exhibition from the gallery:

“In contrast to most gallery exhibitions where ideas and objects are unpacked for conceptual insight, this exhibition is an act of resistance, unity, and hope. Installation will take place beyond the ‘white cube’ of the gallery, subverting traditional art display methods. This show directs our attention to the bifurcation of gender, the most innate of all divisions between humans and the source of, arguably, the deepest form of discrimination.” 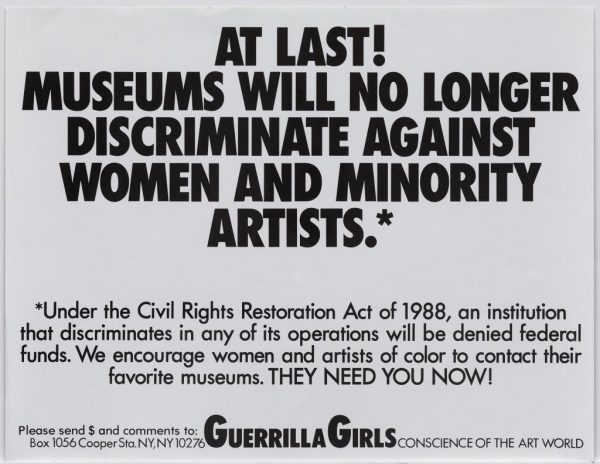 The Guerrilla Girls, At Last! Museums Will No Longer Discriminate Against Women and Minority Artists, 1988, poster, Dallas Museum of Art, gift of the Kaleta A. Doolin Foundation

“The Guerrilla Girls are feminist activist artists. Over 55 people have been members over the years, some for weeks, some for decades. Our anonymity keeps the focus on the issues, and away from who we might be. We wear gorilla masks in public and use facts, humor and outrageous visuals to expose gender and ethnic bias as well as corruption in politics, art, film, and pop culture. We undermine the idea of a mainstream narrative by revealing the understory, the subtext, the overlooked, and the downright unfair. We believe in an intersectional feminism that fights discrimination and supports human rights for all people and all genders. We have done over 100 street projects, posters and stickers all over the world, including New York, Los Angeles, Minneapolis, Mexico City, Istanbul, London, Bilbao, Rotterdam, and Shanghai, to name just a few. We also do projects and exhibitions at museums, attacking them for their bad behavior and discriminatory practices right on their own walls, including our 2015 stealth projection about income inequality and the super rich hijacking art on the façade of the Whitney Museum in New York. Our retrospectives in Bilbao and Madrid, Guerrilla Girls 1985-2015, and our US traveling exhibition, Guerrilla Girls: Not Ready To Make Nice, have attracted thousands. We could be anyone. We are everywhere. What’s next? More creative complaining!! New projects in London, Paris, Cologne, and more!”