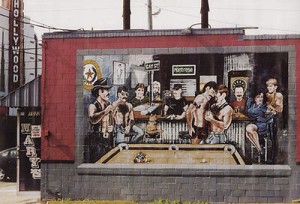 The owners of the Mary’s building, once ground zero for the Montrose leather scene, have again covered over over legendary Mary’s mural as part of the ongoing refurbishing of the Westheimer/Montrose intersection. The peeling monument to downtown pride and diversity was recreated in 2011 for the Houston Pride Parade by artist Cody Ledvina’s Montrose Improvement Bureau with the approval of Building owner Bobby Heugel, who said last year he wanted the  wall to become “an evolving urban art centerpiece.” Huegel is also renovating Chances into  conjoined-twin restaurants Hay Merchant and Underbelly next door. Ledvina vows to replicate the mural in “multiple locations” as recompense for the whitewash.

UPDATE: Building owner Huegel  has told real estate blog Swamplot that the paint-over was prompted by a city demand for Graffiti removal- sparking a derisive string of disbelieving comments.

Expierence Presents: Emily Sloan, That Better be a...