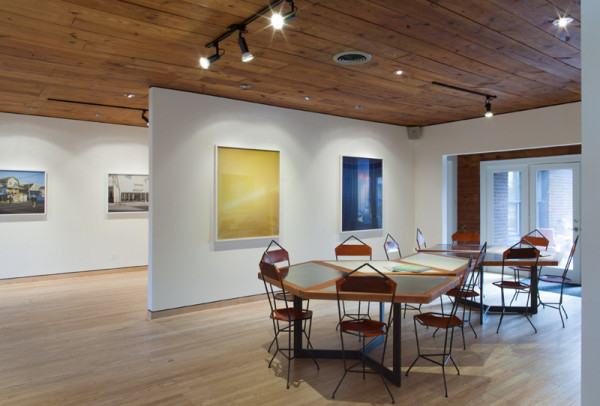 “Monopoly” at The Brandon looks slick. Fans of the gallery’s namesake, Cody Ledvina’s alter-ego Brandon, will find none of that puppet’s goofiness here. Sixteen of Mike Osborne’s glossy c-prints line the walls, the thin white frames glinting under gallery spotlights. Reproductions of the Monopoly gameboard by the entrance, in the form of framed inkjet prints and an artist’s book by Osborne, are reminders that his photographs of Atlantic City seek out locations referenced on the gameboard. Haden Garrett’s polyhedron inspired sculptures and furniture are scattered throughout the exhibition, with his gorgeous, angular dining room table dominating the central gallery. Systems and geometries are the driving force behind both Osborne and Garrett’s projects, and the ideal aspects of their work are accented by the cold white walls and spare placement of the artworks. 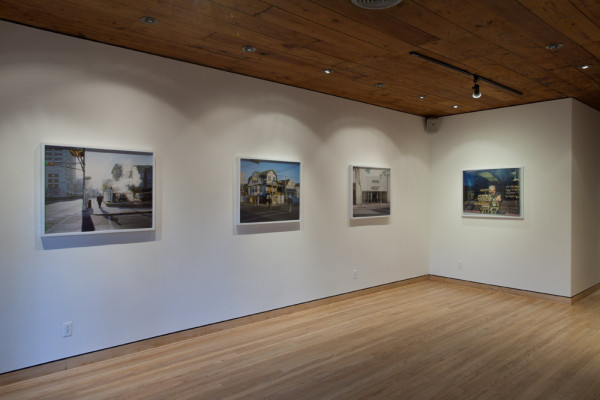 Mike Osborne’s photographs of iconic streets such as “Baltic Avenue” and “Boardwalk” show a dilapidated cityscape. The wall to the left of the entrance has images of isolated figures drifting through the streets. Photographs around Garrett’s table are more formally composed, hazy views of the city, and the back gallery has a theme of fog and water. A diptych of “Atlantic Avenue” shows the high waves of Hurricane Sandy first hitting the shore, alluding to the current devastation of the city. Despite the outlines of a compelling narrative of urban blight, Osborne uses stretches of pavement and panes of glass to put his subjects at a distance. From a position of a wanderer in a strange city, the viewer is alienated from Atlantic City’s sites and people much like players in Monopoly are detached from any social consequences of the economic manipulation and domination required to win the game. 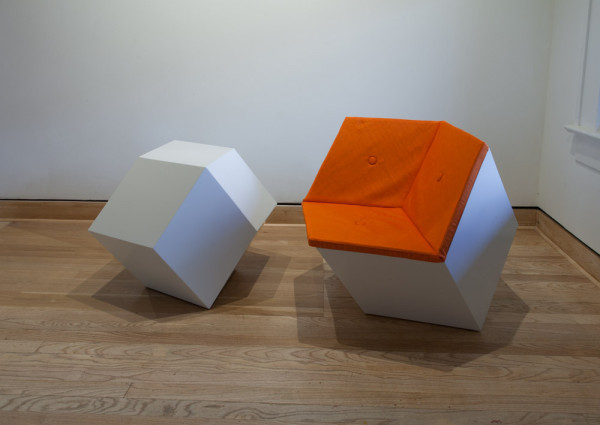 Inspired by the rhombic triacontahedron whose ratios relate to the golden mean, Haden Garrett’s bold outlines are drawn from an ancient formula for beauty and are themselves very pleasing to the eye. It is unusual to encounter furniture as objects in an art exhibition. Formally, the chairs and tables are stunning, a perfect balance between complexity and simplicity of form. I hesitated to sit in them because they are so pristine but felt compelled because of this review. How could I write about furniture without testing its practical function? The leather and padded seats on the chairs welcomed my presence, but their sharp angles did not exactly promote lounging. Indeed, the chairs at the large table have a tendency to tip over backwards if one leans or pushes back on them. But in the context of Osborne’s photographs, the instability of Garrett’s furniture is conceptually appropriate as it points to the disjuncture of an ideal and the reality of its incarnation. 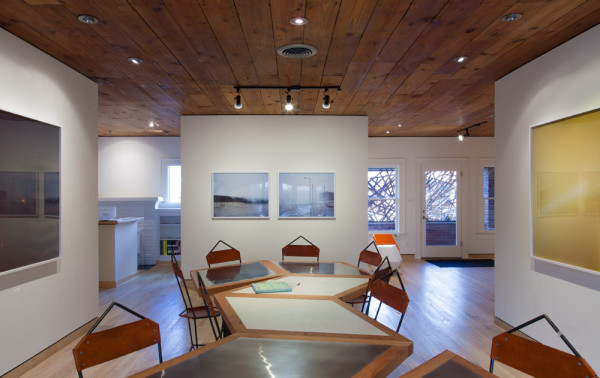 The restaurant boom in Montrose has provoked a furniture revival with talented artists fabricating benches, tables, and chairs for bars and eateries up and down Westheimer. Garrett’s inclusion in a gallery on this street signals a recognition of the aesthetic accomplishments of contemporary decorative arts in Houston and of Garrett as one of the foremost participants in this movement. The location of The Brandon in the heart of a neighborhood undergoing a real estate boom also makes Osborne’s photographs a critical reminder that what goes up must come down. The heady optimism of speculation will eventually cycle back to decay. 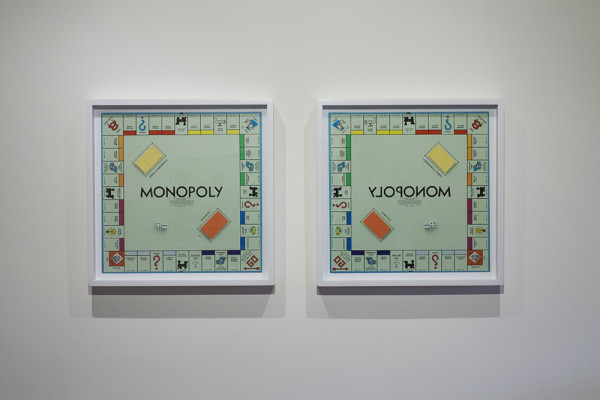