A Cure for All Your Troubles: Visiting Jan van Huysum

There are plenty of moments in a person’s life when they learn something surprising about themselves. In my experience, it’s happened in times of high stress or total banality, when I’ve been caught off guard and exposed to a potent combination of pleasure and/or pain. I found myself in a surprisingly pleasurable moment a few years ago, which bound me to an artist and an art genre to which I had never given a single thought. 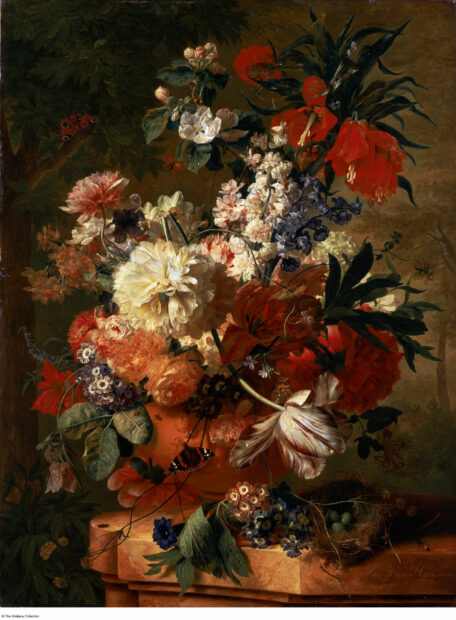 Jan van Huysum, “Flowers in a Vase,” 1726, oil on panel. The Wallace Collection

I had been in London for some years working around the block from the Wallace Collection, a free-to-the-public aristocratic townhome-turned-museum. It holds the collection of Sir Richard Wallace, and is rife with, but not limited to, all-star Rococo paintings, Canalettos, highly stylized 18th-century gilded furniture, and multiple armories. The job I had was a bit stressful, so a regular lunchtime visit to the Wallace broke my day up nicely. For nearly two years I walked past a pair of paintings, both of fruit and flowers, and both, at first glance, wholly unremarkable. At least they were, until I finally decided to stop and have a long look. Once in position, I didn’t move for close to an hour and I knew everything had changed. I was 30 minutes late returning to work, but no one cared. 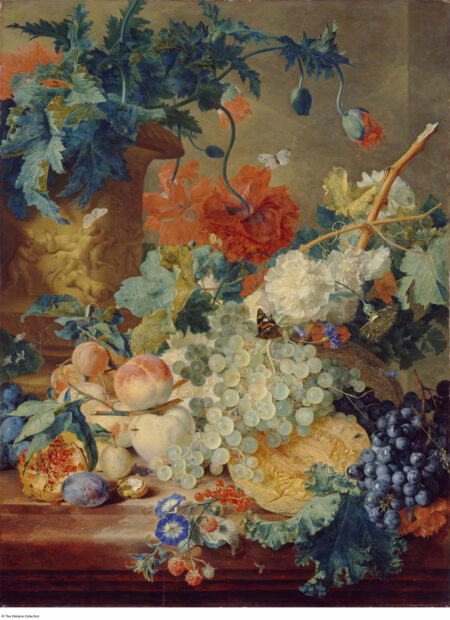 The two paintings, which are by Jan van Huysum, sit on either side of a doorway in the Dutch Masters room at the Wallace. Both have flowers, and one includes fruit. It was the fruit painting that forever tethered me to van Huysum’s picture-making; in particular, it was a single grape. Or, the reflection contained within a single grape, no bigger than a dime, of his studio window with clouds from that particular day, circa 1720. If that grape could see out, it would have seen a red-eyed, brain-dead man staring wide-eyed and slowly filling with anxiety and joy. From there it spread outward to every detail. But it didn’t stop; the entire painting was detail, down to what felt like a cellular level. I couldn’t understand it, I couldn’t wrap my head around van Huysum’s process, much less why this painting needed to exist. Noticeable next were the edges of a serrated leaf, each changing in a direction no less than a millimeter, all with no discernible brushstrokes. What was happening? How? I got that Dutch painters used lenses, but this was something else. This was tantric, and was the closest thing I’ve felt, since I was a kid, to humans being “in control” of the world. 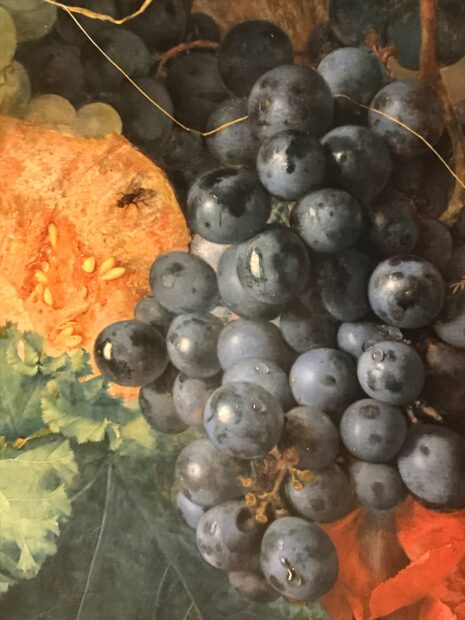 When back at the office, I tried to explain how important this grape was, how this artist was fused hip to hip with the leading scientists of his day. (I assume he must have been, but I don’t know.) The point is you have to see these paintings because they will do things to you. And after multiple lunch break pilgrimages with my colleagues, I am secure in knowing they at least saw them. I would return to the Wallace every day for another year and a half to look at just these two paintings. Nothing else was even close to these works’ mastery and devotion to their subjects. That is, until my visa went sideways, and I came back to Houston. 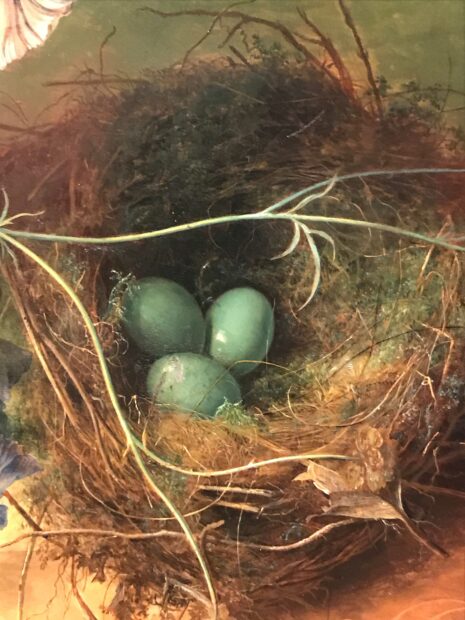 Soon after I returned, I went to the new Kinder building at the Museum of Fine Arts, Houston. It is a beautiful space, and I absolutely loved seeing the institution’s holdings on display. But, the museum’s modern and contemporary collection isn’t what got my heart rate up. I walked through to the Beck building to visit some old friends. I wanted to say hello to those paintings and sculptures most Houstonians, and anyone who frequents the MFAH, have an affinity for.

But then it happened. I turn a corner and wouldn’t you believe it, a Jan van Huysum was there, sitting on the wall in gallery 210. While it feels like an exaggeration to say I went weak in the knees and that I almost fainted, both statements are true. 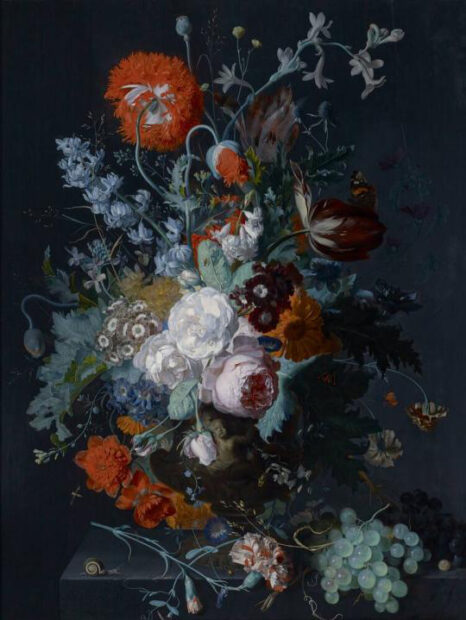 The piece: black frame, black background, high contrast light source. This new van Huysum painting was drastically different than the two at the Wallace in London. This one was way sexier.

I immediately knew the mental routine necessary when confronted with a van Huysum: don’t try and take it in all at once, find a spot, sink in, and dive as far into a single detail as possible. I decided to stare straight ahead and not expend any unnecessary neck energy trying to look around.

I am quite tall. In my eye line is a red flower — I’m not certain what kind it is, but it’s incredibly red. Staring at it, I could see the control and mind-numbing precision that is van Huysum’s recording process. He must have been so in sync with his eyes, his brain, and the world in front of him to allow his creations to assume such a natural effect.

After the brilliant display of red, I noticed the perfectly serpentine curving of the flower stem in the middle, containing a reflected red from the tentacled flower. Van Huysum’s handling of the stem’s width, while careening around these corners, is something that almost made me turn to the docent and ask him to come over and have a look. The artist demonstrates such control here, more than even when illustrating the tiny ants or flies wandering about within his scenes.

Another area where he just flat out shows off is his illustration of a snail, at the bottom left. Look at that shell; look how he rounds the corners with no obvious effort. What an absolute maniac! You can try to draw a spiral, but good luck painting one with this clarity. Want to up the complexity a bit? Have a look at the painting from the side — it is entirely flat. No raised paint or tricks of the trade. The viewing experience of van Huysum’s painting is absolutely a pleasure. 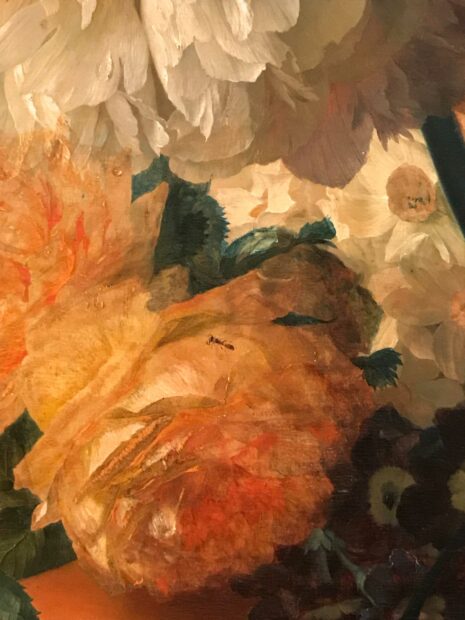 Do yourself a favor: if you ever come across a painting by Jan van Huysum, or notably one by his predecessor, Rachel Ruysch (who may actually be better than JvH. I have only seen one of her works briefly, but it did feel particularly superior in ways I can’t articulate in my limited word count), sit in front of it and stay there for a while. I bet it will draw you in and swallow you whole. If not, you can do what my colleagues did and pat me on the head with an “atta boy.”

Cody, I have always loved Jan van Huysum’s paintings, but your experience and description gave me chills without even looking!