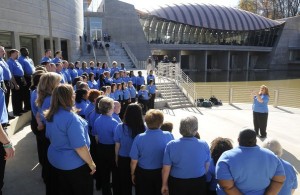 The Wal-Mart Association Choir performs at the opening festivities

Gaile Robinson, art critic for the Fort Worth Star-Telegram, made the trek to the new Crystal Bridges Museum of Art in Bentonville, Arkansas and turned in a detailed report on Wal-Mart heiress Alice Walton’s ambitious project, which opened Friday.

Influenced and partly in collaboration with Fort Worth’s Amon Carter Museum and its founder, Ruth Carter Stevenson, Walton has built her Field of Dreams, and employed former San Antonio Museum of Art Director Don Bacigalupi to ferret out art to stock it. Robinson took the tour (“Treated like unruly fourth-graders”), and has things to say about the building (“the best way to see the museum is from within”), the town (“Disneyesque in its tidiness”), and the collection (some works are “worth the travel miles” and others “seem more like placeholders for greater works to come”), and has the lowdown on the “newest American art museum of the past 50 years.”

There’s an entertaining minute-by-minute account of the opening festivities on the Northwest Arkansas News’ NWAonline, and a report on protests by a Wal-Mart employees group and an Occupy Wall Street chapter in Bentonville on artinfo.

Amon Carter Getting a Facelift And it Sounds...