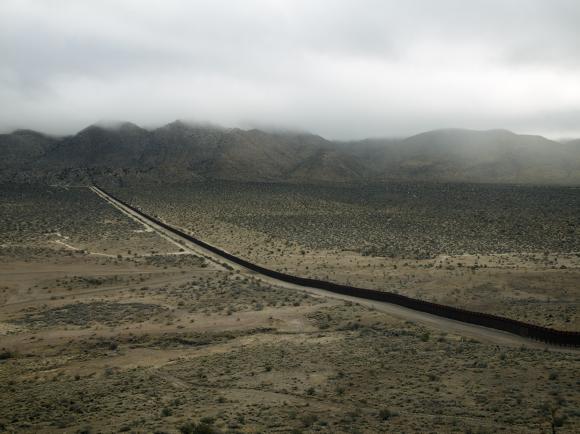 “The wall is a fantasy,” an Arizona borderlands sheriff recently testified to The New York Times. “I don’t care how big, how high or how long it is—it’s not going to solve the problem.”

We’ve all heard quite a lot about a proposed wall between Mexico and the United States from our president-elect, who claims that he will build it and make Mexico pay the bill… prompting former Mexican President Vicente Fox to emphatically state, “We’re not gonna pay for any fucking wall.”

Long before Man With Hairdo began to yawp about making the nation great again, we had already spent $24 billion to erect walls and other intermittent barricades along a third of the 2,000-mile border. That effort began in 2006. A few years later photographer Richard Misrach—whose Desert Cantos project spans four decades—turned his attention to the border wall. 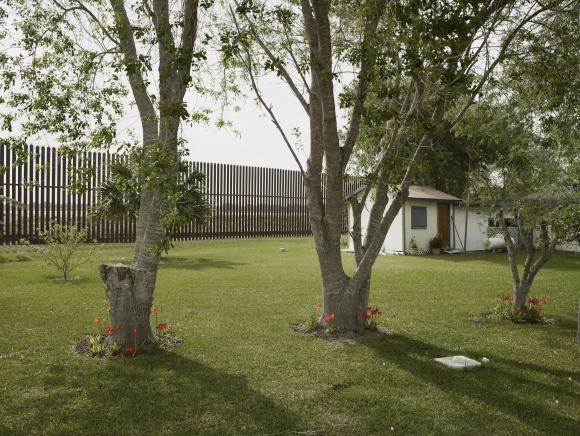 Then Misrach saw Mexico City-born composer Guillermo Galindo performing in San Francisco with unique musical instruments or sound-producing sculptures that he had created from materials left behind by border-crossing migrants. Misrach suggested they collaborate, resulting in the current exhibition, Border Cantos, at the Amon Carter Museum of American Art in Fort Worth.

The museum’s senior curator of photographs, John Rohrbach, says the project’s Amon Carter iteration is designed to represent a journey. He encourages visitors to consider what they would bring along were they compelled by poverty or political instability to leave their homes and undertake an arduous trek to a foreign land in search of a better life. 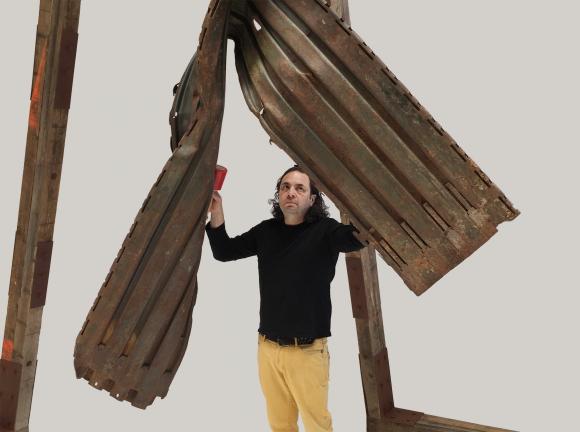 Several of the exhibition’s 44 landscape images—some produced in monumental scale—and 18 instruments or sound sculptures are in the museum’s main entrance lobby, including Galindo’s Ángel exterminador (Exterminating Angel). Representing angel wings or a hanged man, the instrument’s bent resonator body is a discarded piece of border wall that had once been part of a Vietnam helicopter landing pad. Galindo plays the sculpture like a gong. 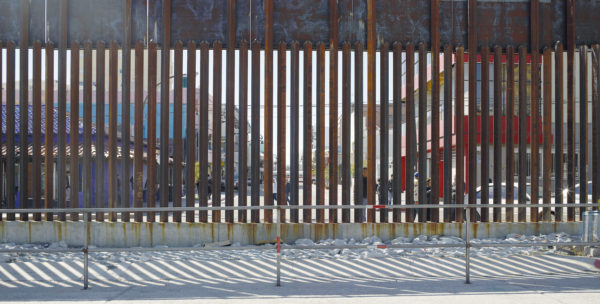 Misrach’s immense 2013 image of the fence between Nogales, Arizona and Nogales, Sonora, consisting of vertical slats with empty spaces between the slats, underscores the awkward, uncertain sense of otherness that gives rise to the desire for colossal border barriers. Standing in the so-called First World, we gaze through the vertical slats like voyeurs peeping through giant window blinds at everyday life in the so-called Third World. Even when we nurture the best of intentions, we can often find ourselves in fear of the “other.” 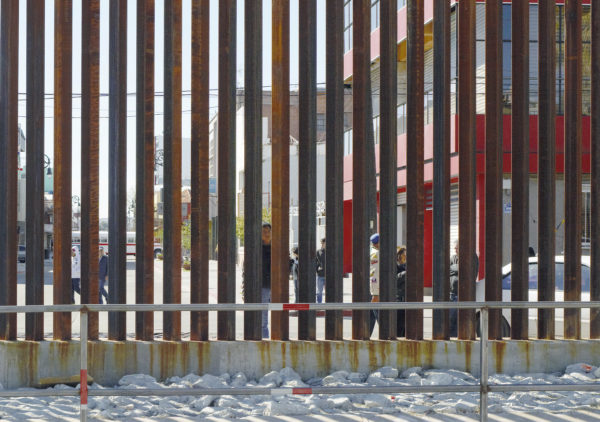 At a London lecture earlier this year Misrach confessed that even he lost momentary awareness of ordinary life on the border when he spied two boys running through Nogales’ vertical slats. Conditioned by incessant media reports on cartel activities, the photographer briefly thought that he might be witnessing a drug deal before realizing that the youths were merely playing soccer. 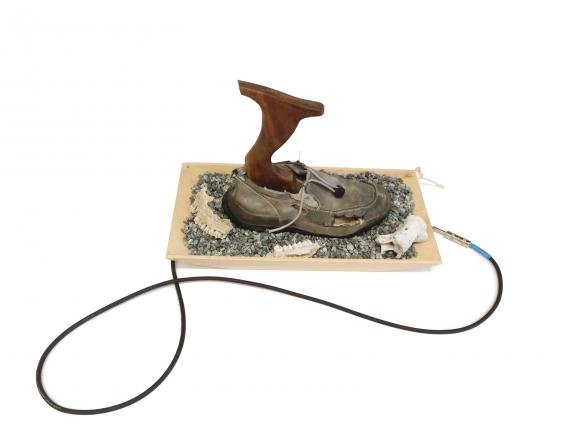 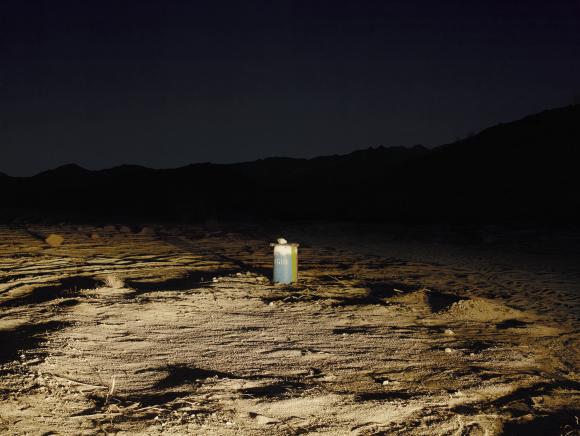 Images and artifacts also represent life-saving water stations placed by humanitarians for migrants passing through punishing desert wilderness. Some 6,000 people are said to have perished trekking north of the border from 1995 to 2010. Several water-station flags or banners here feature Galindo’s inventive, silk-screened musical scores. A display of objects carried by children, many of which the composer utilized for his Micro Orchestra, provides a haunting testament to the troubling surge of unaccompanied youngsters crossing the lower Rio Grande in 2014. 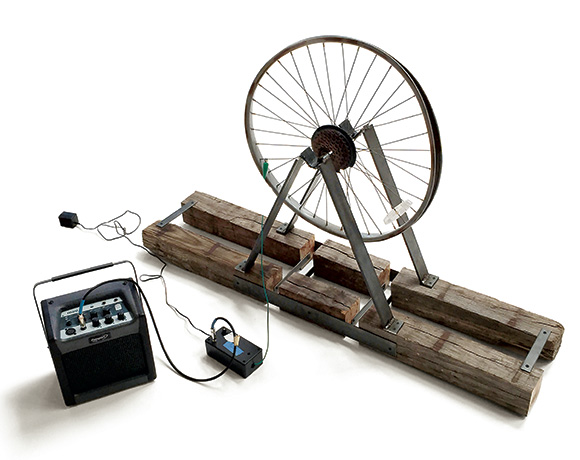 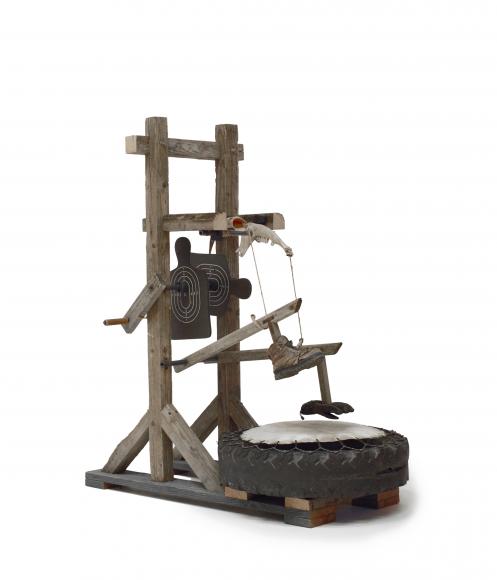 The last arranged space one reaches in the Amon Carter journey is described by Rohrbach as a Sonic Gallery. Several of Galindo’s musical instruments and other works are augmented by tape loops that play selections from the four-plus-hour symphony he composed for Border Cantos. One of the sound sculptures, Paisaje sonoro (Soundscape), is based on one of Misrach’s photographs of a section of a mountain range rising above a border barrier. For Galindo’s instrument, which is based on an Aztec drum called the teponaztli, the mountains are created of resonating hollow wood. The rusted nails, suggestive of the border barrier, can be plucked, and the valley floor is covered with pages from a migrant’s Bible weathered by sun, rain, and wind. 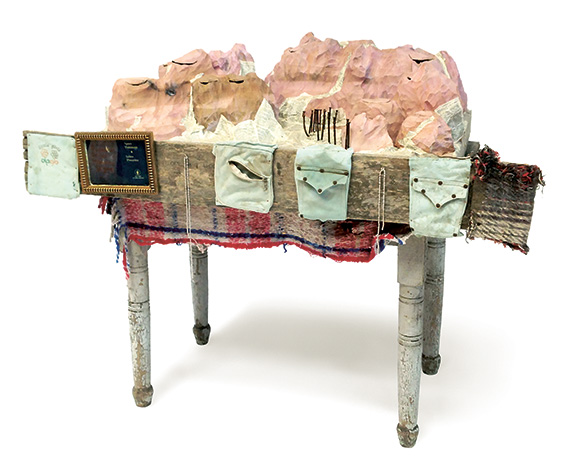 As Josh Kun, author of  Audiotopia: Music, Race, and America (2005), notes in the catalog of Border Cantos, Galindo with this piece is “nodding to the increasingly en vogue European, American, and Canadian sound art proclivities for studying landscapes as soundscapes, natural environments that are defined and experienced as much by sound as by vision… [Galindo] wants us to hear the borderlands as a sonorous eco-geography, as canyons, gulches, and ranges that echo and hum, sing and vibrate, but also a sonorous political geography that is forever changed by human composers… who alter it by changing its natural notes and chords and giving them social and political resonances.”

Disheveled pages of a Spanish-language edition of Dr. Zhivago found near San Diego indicate the passage of educated migrants. An audio loop plays readings from the book. Though the found artifact was a random encounter, it is an appropriate literary selection given that the revolutionary novel had to be smuggled out of the USSR and into Italy before it could be published in 1957. 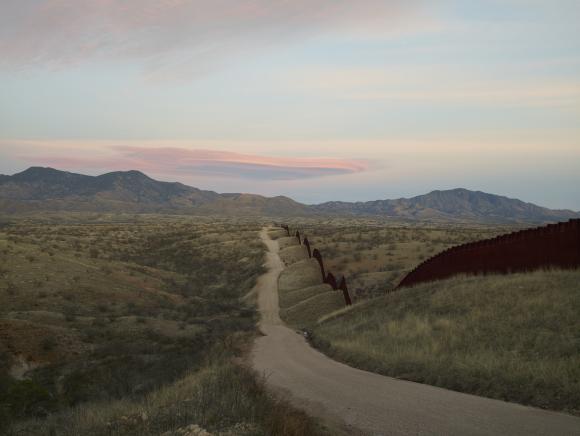 The monumental photographs of the wall rippling across the landscape remind many of Richard Serra sculptures. Or Christo’s Running Fence. In some of the images the wall’s presence can intensify the sculptural qualities of the land itself. The nearly life-size diorama views of ordinary Mexican life seen through the frames of the wall or fence are often weighted with an uncomfortable anthropological element. Some of them remind me of inadvertent real-life versions of The Couple in the Cage, the Barnumesque 1992 primitive-humans-on-display performance of Guillermo Gómez-Peña and Coco Fusco.

Perhaps the most puzzling discoveries Misrach made as he explored the border were the effigy figures he found standing like frozen scarecrow dancers in a California canyon and arroyo. “Fashioned out of tattered clothing on dry agave stalks,” he writes in the project’s catalog, “they seemed to stand guard over the desert. Were they whimsical sculptures? Signs of protest? Stand-ins for missing migrants? Were they meant as warnings? Symbols? Deterrents? Haunting and mysterious, they are a potent introduction to the borderlands, where singular meanings and definitive answers can be hard to find.”

The unsettling figures also speak of the absence of migrants themselves in the images. As Misrach explained to his London audience, the absence of people in the border cantos is a presence of its own. 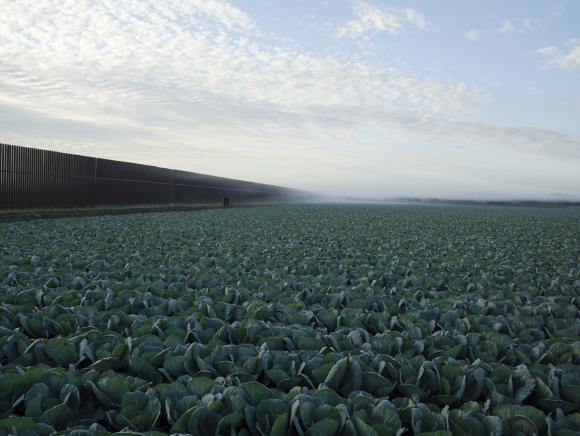 Asked about his working methodology on the border, the photographer stated that he preferred discovery by stumbling rather than attempting to plan his movements ahead. “I like to wander and get lost,” he said. “The best projects are done by accident. It’s a way of working that’s much more meditative, more contemplative.”

‘Border Cantos’ is on view at the Amon Carter Museum of American Art through December 31. On Fridays, Saturdays, and Sundays during the exhibition, four short tape-loop videos of Galindo performing with his instruments will be shown in the museum auditorium. The videos can also be seen here, and more instruments and sounds can be seen and heard at the project website.

The Polaroid Project at the Amon Carter

Border Cantos also addresses sites where the topography of the Rio Grande makes it difficult or impossible to build a wall right by the river, so it was built a bit north of the river, creating space on American soil that is inaccessible or a paininthenecktogetto for Americans.

Seeing Chris Burden’s “Urban Light” in Christina’s L.A. report reminds me that he responded to an earlier version of the border fence in 1978. The piece was titled “Coals to Newcastle” and is described here:

I didn’t remember the civilian meaning of the phrase “Coals to Newcastle” and had to look it up.