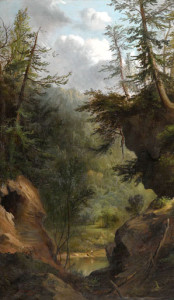 The Amon Carter Museum has proudly announced the acquisition of “The Caves,” a painting by prominent 19th century African-American artist Robert Seldon Duncanson (1821–1872), from the family of Cincinnati abolitionist Richard Sutton Rust (1815–1906). Duncanson was a self-taught, black artist from Cincinnati and a leading landscape painter of his time, influenced by Thomas Cole and the Hudson River School.