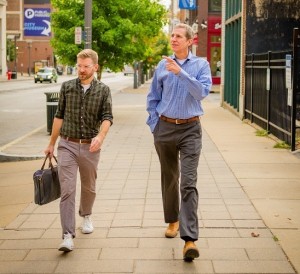 Alligood and Bacigalupi hitting the streets. (Photo via Huffington Post)

On September 13, the Crystal Bridges Museum of American Art will open an exhibition entitled State of the Art: Discovering American Art Now, dubbed by the New York Times as “a kind of heartland response to the Whitney Biennial.” In order to select the 102 artists for the show, the museum’s president, Don Bacigalupi, and an assistant curator, Chad Alligood, logged more than 100,000 miles and spent several months visiting the studios and homes of almost 1,000 artists.

Crystal Bridges, often referred to as the Walmart Museum in the Ozarks (it’s actually not directly affiliated with Walmart, but was spearheaded by Alice Walton, the daughter of Walmart founder Sam Walton) officially opened in November 2011. Bacigalupi was appointed director of the museum in August 2009 and was promoted to president and board member last year. He is best known to Texans for his tenure as director and chief curator of UH’s Blaffer Gallery from 1995-1999 and the Brown Curator of Contemporary Art at the San Antonio Museum of Art from 1993-1995. In an article for the Huffington Post, Bacigalupi stated that they started out with a list of 10,000 artists’ names. “I started with people I knew in Texas and Ohio, because that’s where I had spent the majority of my career,” Bacigalupi said.

According to Crystal Bridges’ blog, they have finalized the checklist but will not release the list of artists’ names until shortly before the opening “in order to respect each artist’s preferences regarding publicity.” But they have lifted the official “gag order” on the selected artists, so names are beginning to leak out. The San Antonio Express-News recently announced three area artists (Michael Menchaca, Chris Sauter, and Vincent Valdez) to be included in the exhibition. The only specific information from Crystal Bridges is that show will include “25 from Texas and the South.”

If you’re on that list, let us know so that we can give you the congratulations you deserve! 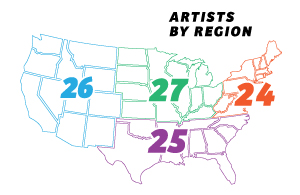 Did the curators visit San Antonio artists or did they Google San Antonio artists? The first two names are so predictable. Talented, of course, but it’s getting old seeing the same names get all the opportunities. Let’s just build a shrine for Vincent already.

I agree, a more thorough sweep of San Antonio would have revealed some great artists.

A better story would be “Who said no to the invitation to the Crystal Bridges show?”

And to the butt hurt artists and supporters feeling unrepresented: consider the source of the museum’s funding.

I do not understand why the museum’s funding would have anything to do with the artists in or not in the show. The museum is an independent non-profit.

Do we question the funding for the Carnegie in Pittsburgh? Do we question other philanthropists that had questionable track records during the industrial revolution? The Rockefellers?

That said, Walmart treats its works poorly and seems to do this intentionally. If that is a concern, don’t shop at Walmart. The money for the museum is already donated and therefore no different than the portion of the Carnegie endowment from Mr. Carnegie or other not so perfect business folk look out for the bottom line at the expense of workers’ wages.

I am in that show.

San Antonio native Michael Menchaca, who is currently enrolled in RISD’s Printmaking MFA program and did his undergraduate at Texas State, is in the show.

Only four from Texas? C’mon, fess up!