First Sculpture: Handaxe to Figure Stone at the Nasher 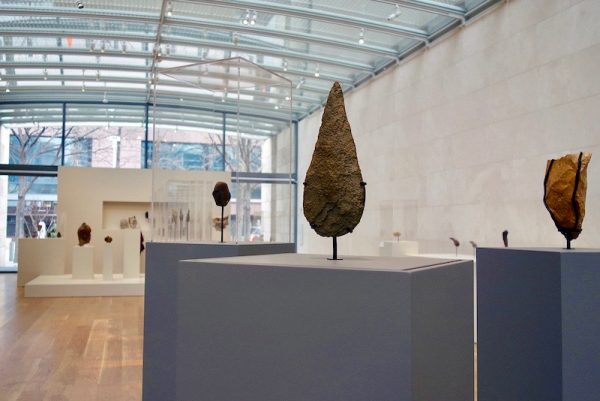 Most chronicles of art history trace this human impulse back to objects like the Ice Age Lion-man, an ivory sculpture recognized as the first animal-shaped sculpture, or the Chauvet Cave paintings in France, with their 30,000-year-old depictions of horses, cattle, bears, and woolly rhinos. First Sculpture: Handaxe to Figure Stone, on view through April 28 at the Nasher Sculpture Center in Dallas, argues for a much longer timeline of artistic intent. The oldest object among the exhibition’s 70-plus artifacts is the 2.5 million-year-old Makapansgat Pebble. Found in Makapansgat, South Africa, the chunk of craggy jasperite resembles a human face. 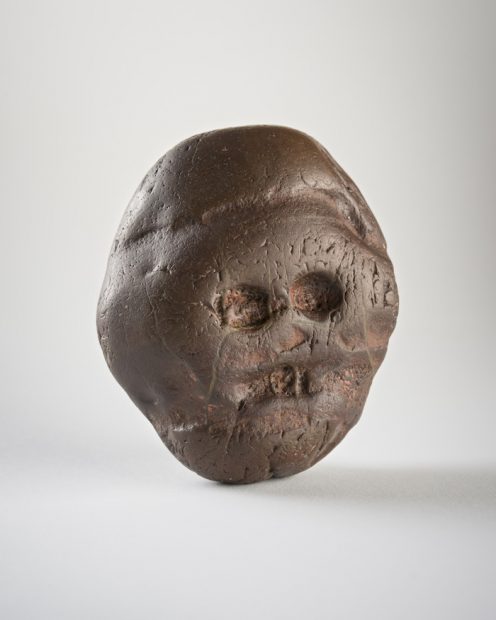 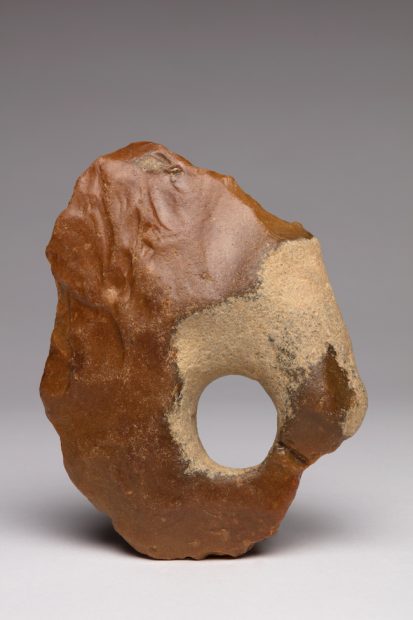 Did our pre-Homo human ancestor — an Australopithecus — who collected the Pebble recognize in its three stone pocks a reflection of his or her own eyes and mouth? Or are we applying a modern view to the past, morphing it to our present perceptions? There are bold claims in First Sculpture, some shakier than others. Yet by bringing together some of the finest examples of figure stones and handaxes — objects not exceptionally rare in archaeology — it clearly demonstrates how prehistoric human ancestors found and brought out beauty in the geological world around them. Traditionally, these handaxes are studied only as utilitarian tools. A 500,000-300,000-year-old flint handaxe from West Tofts, England, has a fossilized shell carefully framed by the knapping, a technique of stone flaking, and another from the same span in France has an eroded hole in the stone which the knapper carved around — a seemingly ornamental hole as it would have broken a user’s thumb if used as a handle. 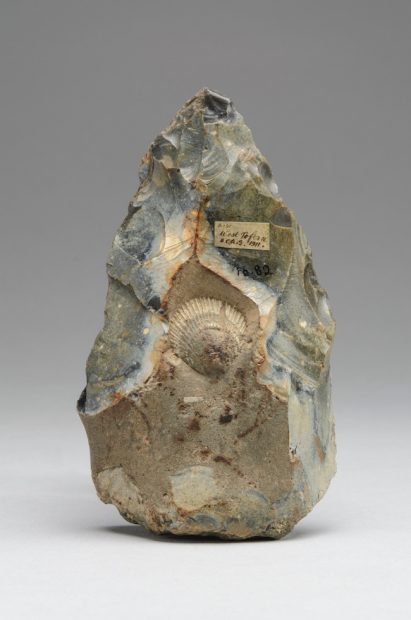 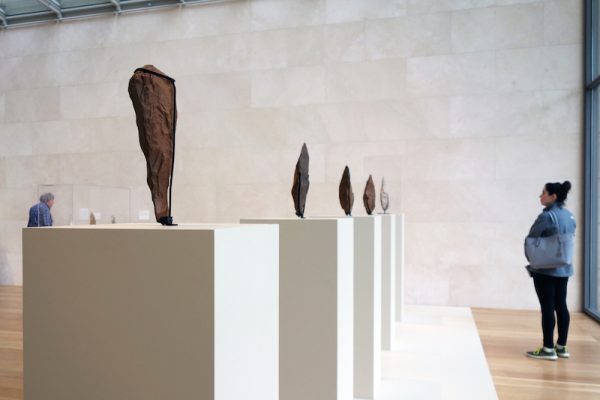 First Sculpture features loans from the British Museum in the UK, Field Museum in Chicago, Upper Galilee Museum of Prehistory in Israel, McGregor Museum in South Africa, Musée de Préhistoire in France, and other institutions, joined by numerous specimens from the collection of artist Tony Berlant. Berlant co-curated the exhibition with anthropologist Dr. Thomas Wynn. It’s luminously lit in the Nasher, with light radiating in from its sculpture garden, where biomorphic bronzes by Joan Miró and Henry Moore resonate with the gestural expression of the carved stones. Almost all of the handaxes are displayed upright like totems, so you can see each detail in the round. First Sculpture is billed as the “first museum exhibition to present ancient handaxes and figure stones as works of art,” and indeed, the display of these stones is different from how they are usually presented in natural history or anthropology museums. A few days after visiting the Dallas show, I witnessed a case of handaxes at Harvard University’s Peabody Museum of Archaeology and Ethnology, part of the exhibition All the World Is Here: Harvard’s Peabody Museum and the Invention of American Anthropology on the development of anthropology in the 19th and 20th centuries. Just as this 21st-century reconsideration places the handaxe on an understandable timeline that leads to contemporary artistic creation, so, too, did Victorian archaeologists use the tools to guide ideas about human evolution and the making of tools as a sign of advancement to present industry. 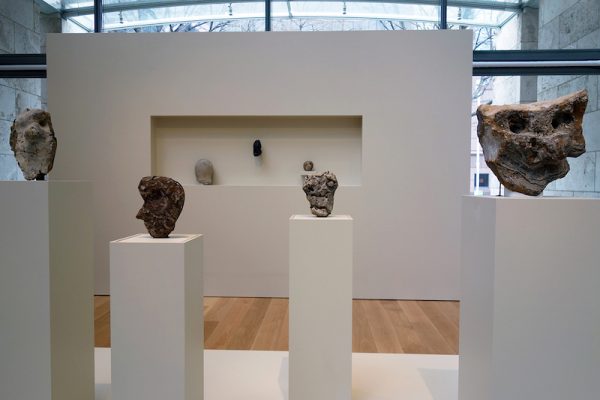 Visitors to First Sculpture first encounter a group of four objects that act as touchstones (so to speak) for the themes of the exhibition. This gathering includes the Makapansgat Pebble, as well as a pebble tool from Portugal whose quartzite material seems chosen for visual impact, a basalt handaxe from Mauritania, and a cleaver from Mauritania, which either a Homo erectus or Homo heidelbergensis crafted to, as the exhibition states, “highlight its resemblance to a feline face.” The handaxe sections feel the most solid, demonstrating how certain early humans took care to select interesting stone, like the crystalline gneiss of a handaxe from Mauritania, and the purple, red, and yellow jasper quarried and modified by Neanderthals in central France. A “gigantism” display has colossal versions of handaxes that have no practical purpose, and show no damage from use, such as one hewn from quartzite 800,000 to 300,000 years ago in Algeria. A selection of spheroids — artifacts painstakingly fashioned into orbs — similarly have no evidence of use as tools. Shape variants ranging from teardrops to ovates suggest some design decision. However, the exhibition’s argument that the “twisted ovate was the most used vehicle for displaying knapping skill” seems to push confirmable intent a little far, even if its example of a dramatically-chipped handaxe from England is striking, with carved orange and blueish gray flint rippling like ocean waves. 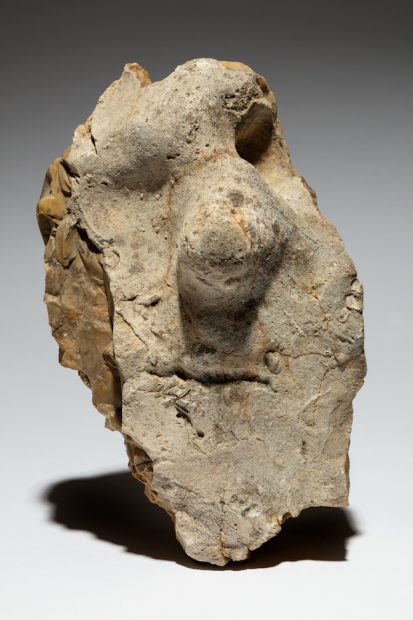 Less convincing is the theorizing on the figure stones: naturally-occuring rocks which for prehistoric humans supposedly represented faces, or crocodiles, horses, elephants, and lions (which would presumably kick the Lion-man off his first-animal-sculpture throne). Here the show is not about artistic intent, but rather early humans projecting meaning onto found objects, which were often augmented and enhanced through additional carving. The exhibition text notes that the same pareidolia of our moderns minds, which causes us to perceive such patterns as Jesus’ face in our toast, or a man in the Moon, is shared with monkeys, apes, and our early human ancestors. A flint figure stone from Fontmaure, France, for instance, was detached from a larger outcropping by a Neanderthal who maybe saw in its smooth nodule the shape of a cranium. Even if it’s a bit romantic, there is something uncanny that here in 2018, you can discover the crooked line of a nose or the uneven spacing of two eyes in these figure stones, and perhaps follow in the mental path of some distant ancestor.

Right outside the First Sculpture gallery, visitors can touch and hold three handaxes that were made around 200,000 to 700,000 years ago, discovering how their teardrop forms were an ergonomic design. Whether or not you are sold on these as works of sculpture, it’s powerful to have this tactile experience with our prehistoric past. Our idea of art has changed so much in just the previous century, in how it’s as much about arranging a new perspective on the world as the act of creation; measuring its evolution in hundreds of thousands of years involves much conjecture. What’s most moving about First Sculpture is this shared lineage of finding something compelling in the natural world, and shaping it to our desires.

Through April 28, 2018 at the Nasher Sculpture Center in Dallas.

“Neandertals produced no depictions. There is nothing in the extensive archaeological record that could in any way be construed as a Neandertal’s representation of an animal, or a person, or indeed of anything.” So writes Thomas Wynn in his book “How to Think Like a Neandertal”.

And now Dr. Wynn, a theoretical anthropologist with little apparent understanding of lithic material, has paired up with a wealthy pop artist in producing an elaborate dog-and-pony show promoting themselves as the discoverers of iconistic expression in stone by our hominin predecessors, blatantly misappropriating the work and intellectual property of independent researchers employing a science-based methodology. Almost incredibly, they are even hijacking the term “figure stone”, which fell into disuse at the beginning of the twentieth century and was revived fifteen years ago by the website daysknob.com which, along with palaeoart.com, seems to have provided much of Wynn’s and Berlant’s (unacknowledged) inspiration. (The likely basis for the well presented neuroscience component of their exhibit can be seen at daysknob.com/Face-Recognition.htm .)

Billed as “the first museum exhibition to present ancient handaxes and figure stones as works of art”, it falls well short of this, and even a modicum of due diligence on the part of the curators would have made this evident. There was, among others, the April 2000 exhibit “Werktuigen en kunst (tools and art) van de Neanderthalers uit Fontmaure, Midden-Frankrijk” at the Museon in the Hague, which displayed some of the same Fontmaure stones now shown at the Nasher. And in July 2015 there was Richard Wilson’s large display at the Watford Museum near London, which, being honest, he titled “Neanderthal Art II – The Fontmaure Figure-Stones”.

And speaking of Richard Wilson, Dr. Wynn and Mr. Berlant visited with him during their trip to the British Museum, querying him extensively on his research but failing entirely to mention him in their big and glossy “scholarly catalog” accompanying the Nasher display. At the same time, they gush about their “stimulating talks with Dr. Nick Ashton of the British Museum”, who has long been disparaging the whole figure stones concept.

Giving credit where it is due, this is a beautifully configured exhibit, and it seems no expense was spared in acquiring the artifacts on display. When I visited on 22 February 2018, the staff were at all times friendly and helpful. It’s just sad that the curators are apparently so disingenuous and self-serving.

Its great that figure stones are now being accepted as the stunning works of art they truly are, I have been an investigator since 2011, and have found it difficult to get any acceptance from professional archaeologists, despite having incredible works of art in flint tool form.