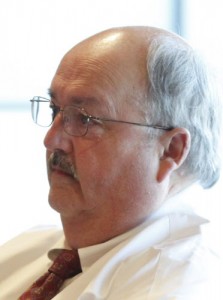 On Friday morning, June 13, the man many people blame for the intractable nature of the Museum Tower debacle, was ousted from his post as top administrator of the Dallas Police and Fire Pension System. Richard Tettamant, who headed the fund for two decades, was voted out by a new majority of the fund’s board.

So speculation can begin on what this might mean for the beleaguered Nasher Sculpture Center. One likely scenario: whoever ends up owning Museum Tower (the majority-owner fund could keep it or sell it; Tettamant would not sell while he was in charge) will, like a good neighbor, address the glare disaster on the Tower end, leaving the Nasher’s acclaimed oculi roof intact and its gardens and art unroasted.

Tettamant, the man who spearheaded the Museum Tower project as a pension fund investment and seemed, to this side of the public at least, loathe to take responsibility for the sun-searing problem it created for the Nasher, was increasingly under the microscope over the last year or so due to what plenty of people speculate were his high-risk and unusual real estate investments on behalf of the fund. The Tower was only one of many of the fund’s head- scratching holdings. (For more on this angle of the story, start with Steve Thompson’s excellent DMN coverage here.)

Even more recently the pension system, which covers the retirement of around 9,000 police and firefighters, was rocked by troubling losses and renegotiations around a popular deferred retirement plan; these wobbly numbers also seemed to threaten to tank the fund.

So, while the Museum Tower controversy wouldn’t be the ultimate reason for Tettamant’s ouster, it was certainly a high-profile symbol of the kind of judgement calls Tettamant had been making that had city officials and some members of his board so worried. While city officials have ordered an independent audit of the fund’s books, we art fans will continue to play the depressing road-trip game: “What kind of people have so little shame that they choose to live in Museum Tower?”

But once the owners cut the glare, the answer will be: very rich ones who like living in (or having stake in) the Dallas Arts District. And that’s all right by us.

“Like living in”, surely. “Having a stake in” is going to be hard to demonstrate. The MuTo is a vertical gated community. It really has nothing to do with the Arts District, and as it’s currently constructed, cannot play a part except as an image on a post card. Do people still send post cards these days?