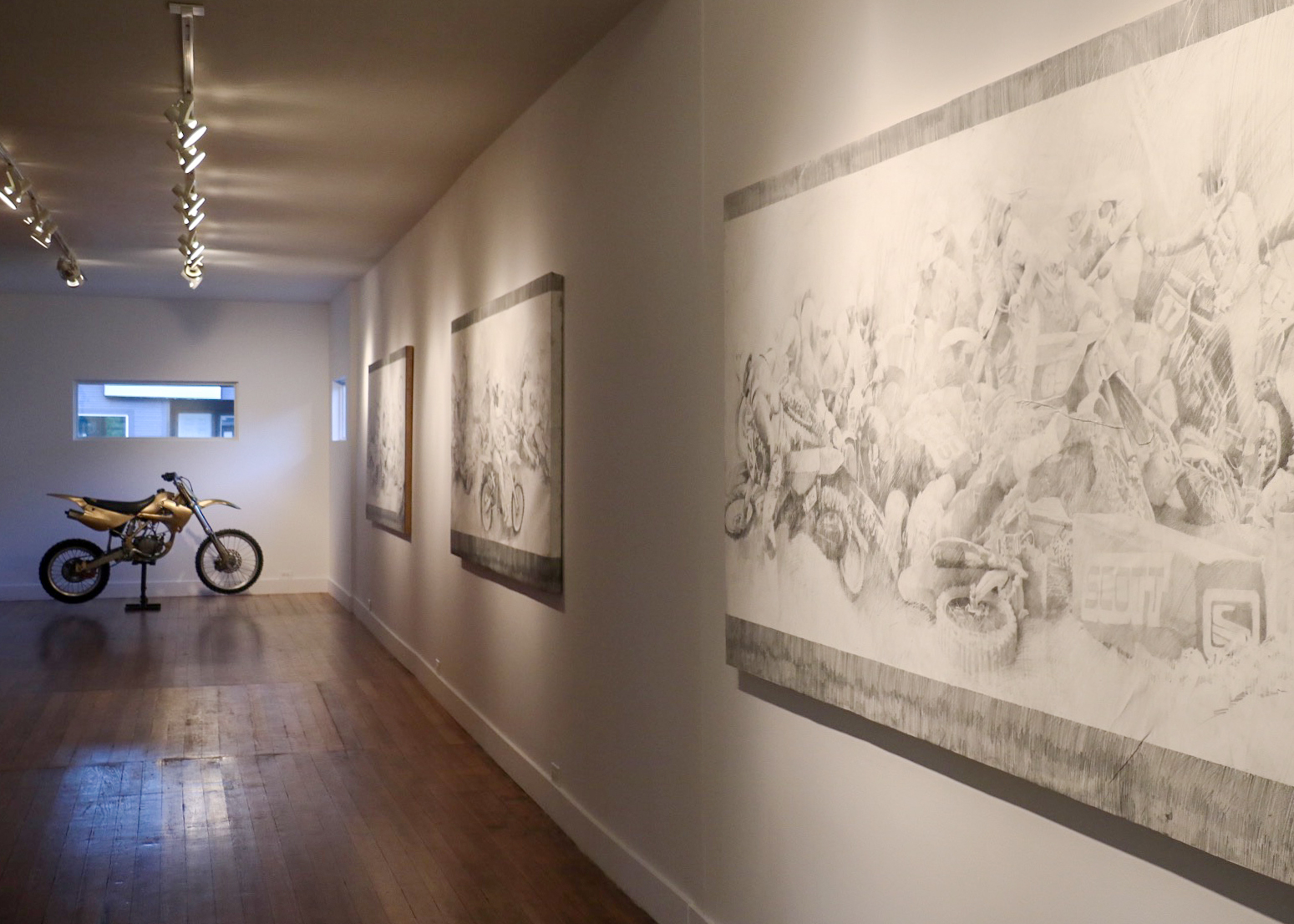 The show is titled after the Greek myth, of course, in which a king foolishly wishes that all he touches would turn to gold. When his wish comes true, the king soon realizes his mistake. Smith’s drawings present a modern mythology, a cautionary tale against a life lived without balance.

The show’s single 3-D work is near the gallery’s entrance: it’s a gold-painted motorcycle. It’s an outlier, really, because the show starts in earnest with the aptly named triptych, Uccello I, II & III—an homage to Renaissance battle scenes, and to Paolo Uccello’s The Battle of San Romano, specifically. Depicting the 1432 sparring between Florence and Siena, Uccello’s painting is pure pageantry: a chaotic mash-up of knights in armor, galloping horses, and an array of weaponry. Smith’s appreciation of the period and her understanding of its artistic principals is evident, and this proficiency frees her to interpret Uccello’s masterpiece anew. Her contemporary reimagining highlights the same sense of chaos and urgency, replacing knights and horses with figures on motorcycles, crashing into one another, kicking up dust, and spiraling out of control, in a frenzy worthy of Le Mans or The Fast and the Furious. Bodies intertwine and straddle their bikes contrapposto in a show of pure machismo. 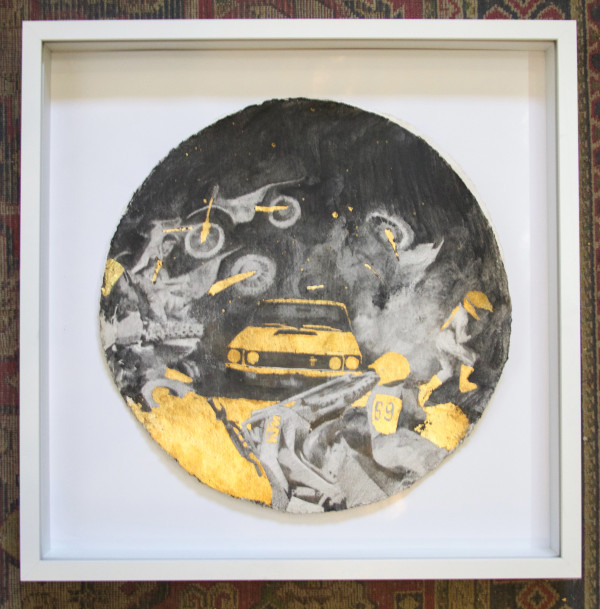 (Note: Although in our increasingly post-gender society, any demarcation of “masculine” or “feminine” subject matter has fortunately all but disappeared, walking into the gallery cold, one might be surprised to learn that these drawings are by a female artist. They’re aggressive and solidly “masculine.”) 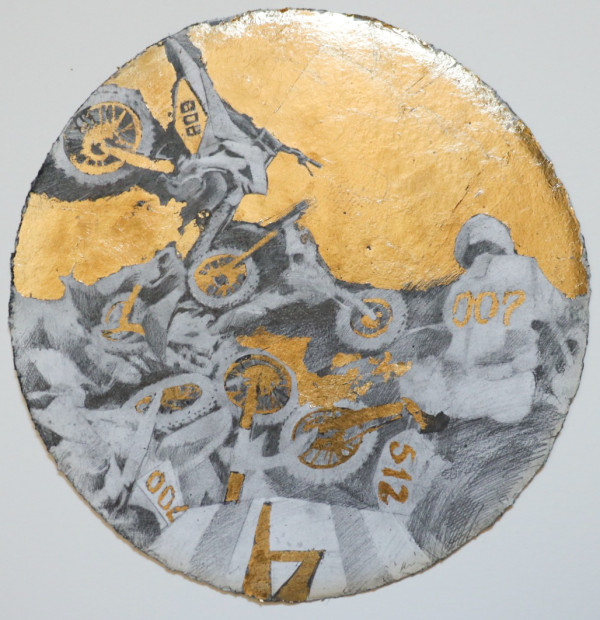 Also worth noting: Smith’s mastery of graphite as a medium. Whippy, curvilinear lines are coupled with elaborate crosshatching to create light, shadow, and motion to great effect. Her drawings are as much about what’s visible as what is not. With liberal use of an eraser, Smith often hints at figures or forms, allowing viewers to fill in visual gaps. Smith conveys a wide-range of feeling in black, white, and gray, simply by maximizing the full capabilities of her medium. 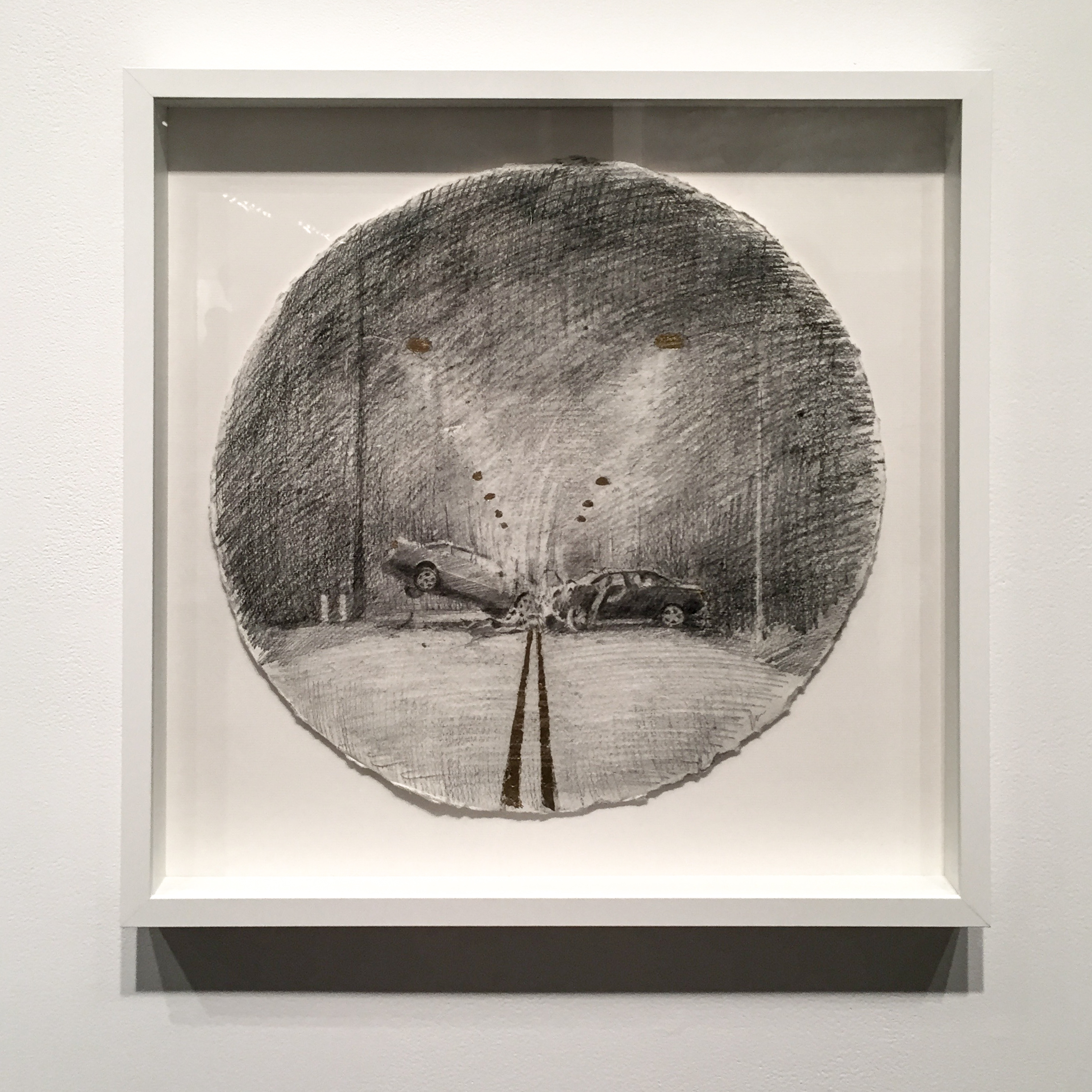 In some of the show’s smaller works— there are several 15 x 15 inch tondos—Smith employs gold leaf. We find it in riders’ helmets, the spokes of their tires, or used to illustrate fire. The delicate and shimmering gold, juxtaposed with Smith’s heavy handed marks, adds to the tension within each drawing. In Dinner Party, for example, among the most dynamic of the small works, two gold-leaf street lights punctuate the night sky. Golden dots of light create an inverted triangle that draws our eye downward to a head-on collision below. 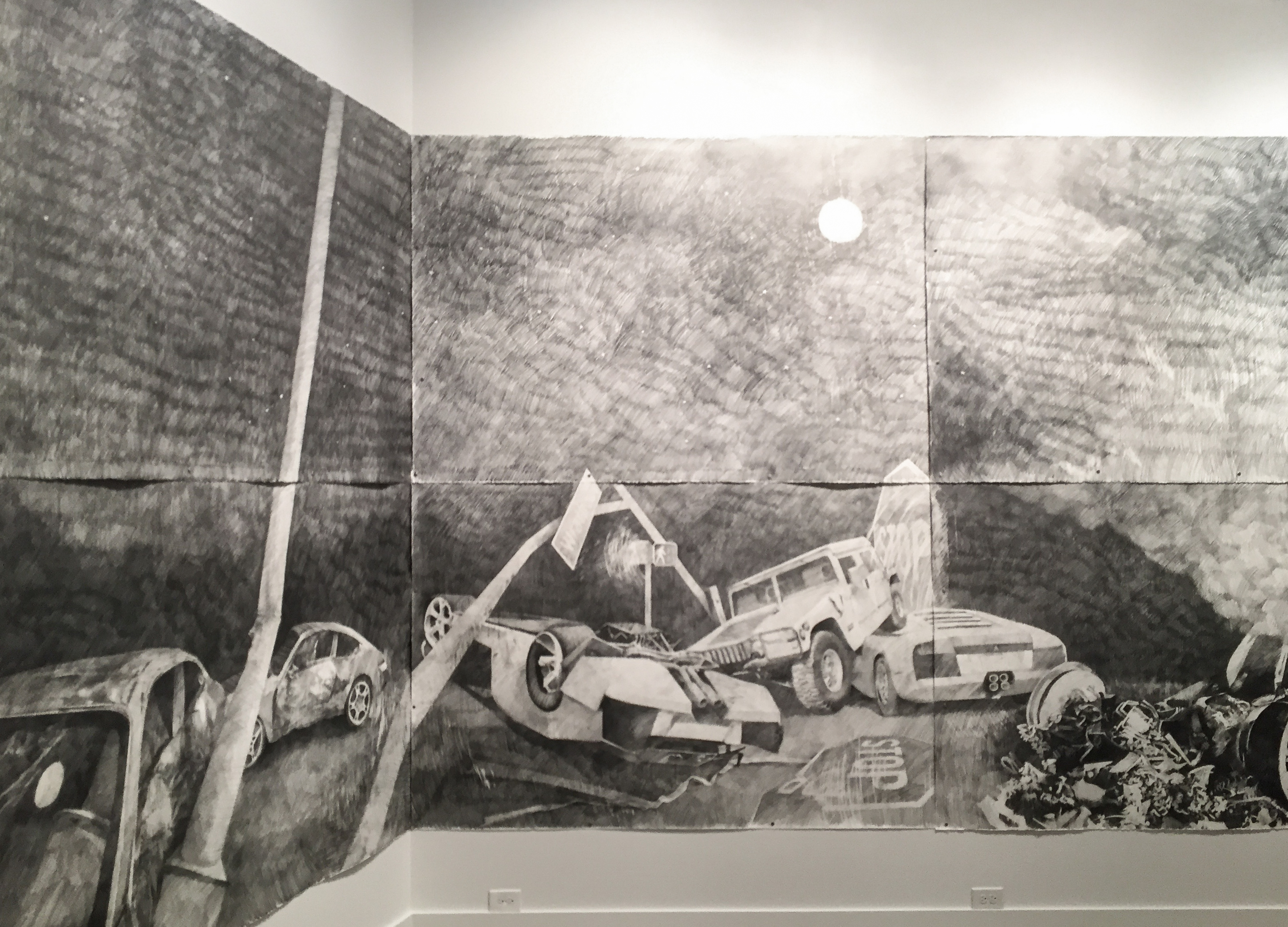 Monsters, the exhibition’s focal point, is a stunning six-sheet drawing installed across a corner of the gallery. Depicting a multi-car pile-up, on ‘Wrath Street’ no less, the scene is a mangled mess of luxury cars, downed light posts and stop signs—again, a warning against the dangers of a life lived to excess. As Smith has wisely remarked: “We’re often guided by desire, but consequence is our mentor.”

Midas is on view at grayDUCK Gallery in Austin through August 21.

Thank you for all your great work and info.