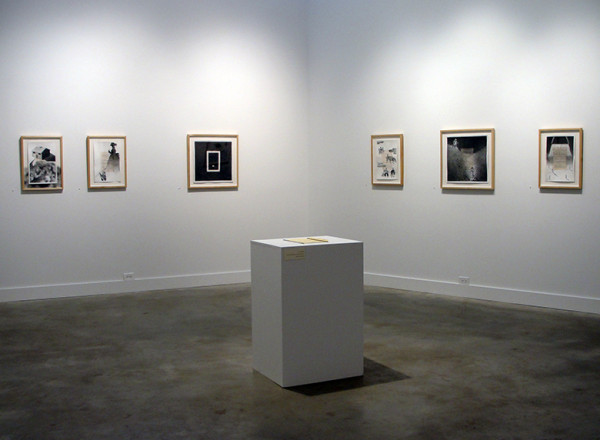 “Eyes Got It!,” the annual art competition, is a rather peculiar member of the Austin art scene. It’s easy to forget it exists and it gets less credit than it deserves. The competition, based on events related to the East Austin Studio Tours, results in a potpourri group show and also highlights one artist for a solo show. With humor and self-conscious fanfare, the competition was originally meant to mimic the not-so-popular television show Work of Art on Bravo, but now has its own life.

On Work of Art, artist contestants competed for a solo exhibition at the Brooklyn Museum of Art, Project Runway style; Sarah Jessica Parker hosted and Jerry Saltz was a judge. (It really was weird, and had a bit of a cult following.) Here, we have “Eyes Got It!” in which Austin and San Antonio contestants compete for a solo exhibition at Austin gallery Grayduck, which has hosted the shows for the past several years. The competition itself is completed in one night, and the point is to provide some transparency to contestants and attendees about the jurying process. Early on, the competition was pretty low production, but as the years roll on “Eyes Got It!” has produced some winners, and gives viewers a solid idea of artists living and working in Austin and San Antonio. 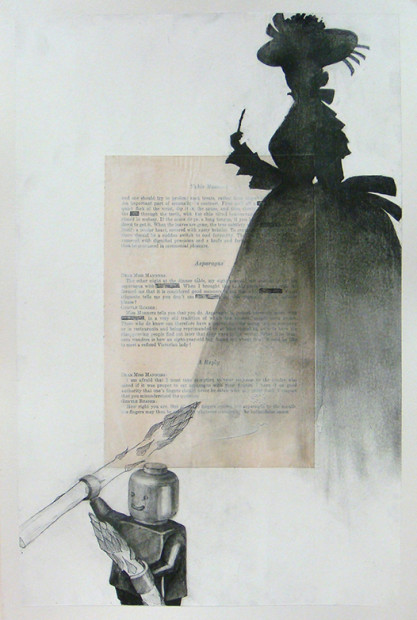 Hiromi Tsuji Stringer is this year’s solo show winner, with her works on paper lining the walls of Grayduck. It’s always interesting to see who wins these competitions; this winner is easy to understand because the work fits into the category of objectively pretty and representational. It isn’t particularly difficult work, and that seems to be par for the course for winners of juried shows. Her show includes 20 two-dimensional assemblages on paper, and her artist statement recalls language mishaps she’s encountered in her assimilation to English-speaking culture as a Japanese woman. Old “Miss Manners” advice columns are a feature in the work, and a perfect bridge between the stereotypically polite, reserved Japanese culture and our freer (and arguably more vulgar) American culture. In these advice columns, people were seeking accordance with the amorphous and ever-changing laws of proper social behavior. 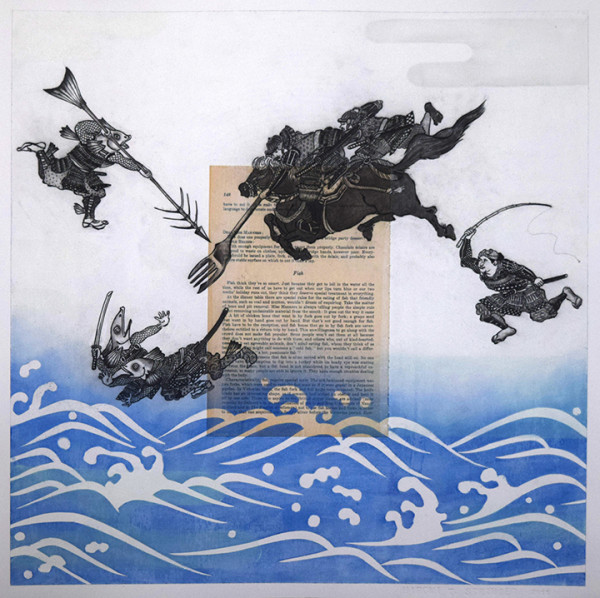 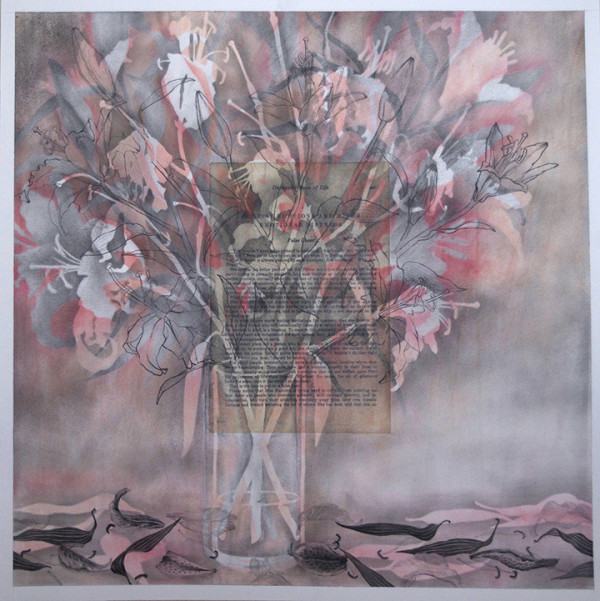 The story she presents is one of a balance of propriety; it’s the advice column pages with preciously quaint drawings on top. Her materials are mostly uniform throughout: graphite, some pigment powder, gesso and a selection of book pages framed expertly in natural wood. The exhibition’s feel overall is a bit too sweet and easily digestible, and there are so many drawings here that it’s difficult to take them in individually (my ongoing gripe about lack of considered editing plays a role in this stance). The show reads more like an exploded storybook of Stringer’s life than a careful exploration of language, piece by piece, unless you really slow down and read the text. With so much work swirling around the gallery space it’s hard to imagine a drive-by viewer spending the time deciphering the meaning and significance of each piece. 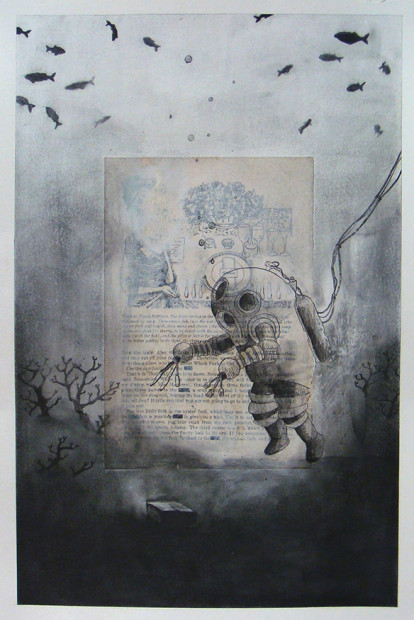 However, this is not to say that the work is unsuccessful. Some works have such a finessed touch that it’s hard not to love them. Going through the show, and parsing the advice that’s being doled out under veils of careful drawings, can be a lovely experience if you’re a careful and dedicated viewer. Each piece has its own point and highlights some particular cultural construct that identifies itself through both language and image. For example, in the collage “Something I Do Not Want You To Know,” all of the words on the book page are scribbled out in pure obfuscation, only to leave visible the singular word “secrets.” Some of the work has such technical treatment, while others are more whimsical and illustrative. 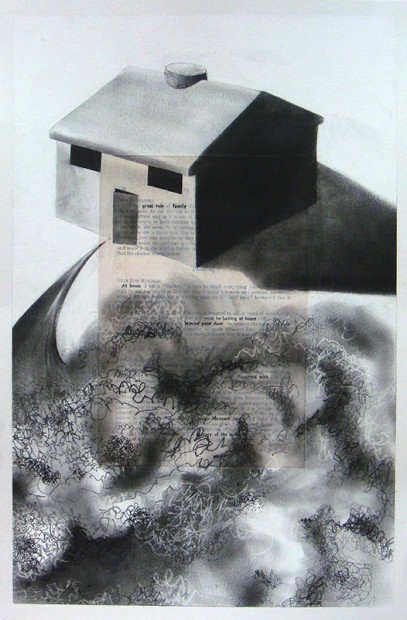 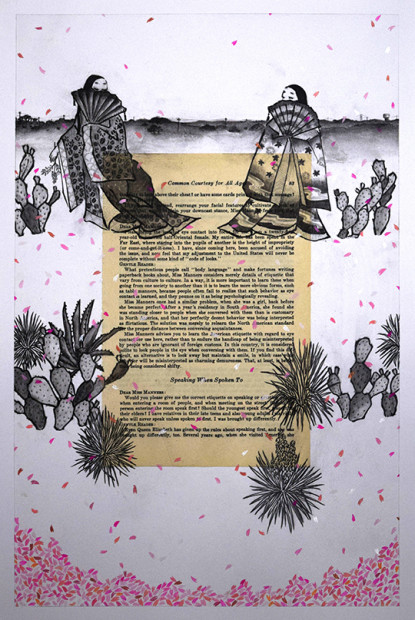 Some of the pages have been given the above-mentioned redaction treatment that further lends itself to a more humorous exploration of the limits and possibilities of language. This I like. I think what she’s doing here is an interesting start, and I’ll be curious to see Stringer fly solo in the future, without the banner of “Eyes Got It!”

Hiromi Tsuji Stringer: As a Manner of Fact…Graphiti for Civilized Tranquility and More at Grayduck Gallery, Austin, through August 9.

Discovered Hiromi’s work last year when she had her first solo show at REM Gallery in San Antonio and was glad to see her again represented as part of a group show at Cinnabar Gallery earlier this year (also San Antonio).

Riffing on what McColloum has to say here, I strongly recommend that everyone slow down and take the time to READ and absorb what’s going on in this work. Otherwise, you haven’t really seen it.

It is a little unfair to dismiss the work as “sweet and easily digestible.” Stringer’s disciplined ethic is refreshing when so much of what we see on gallery walls can easily be classified as somewhat lazy — the “conceptualization” often more important than the finished result.

Stringer is self-effacing when it comes to her grasp of the English language. However, I find that she has a more “precious” grasp of it than most native speakers! I have found much of her work to be sly and pointed. Stinging in many cases.

Good review thanks.
Might be time for another excursion to Austin.