Bring Along Your Cadillac, Leave My Old Wreck Behind

by Christina Rees May 5, 2015
FacebookTwitterEmail 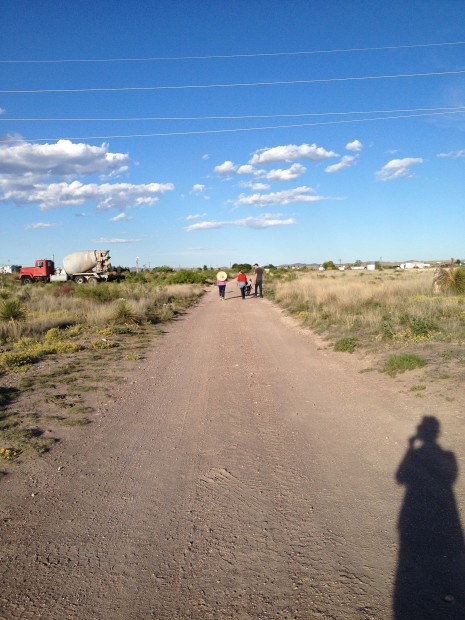 Buck Johnston, my mom, and Heyd Fontenot on the edge of town.

I spent the past week in Marfa with my mom. She’d never been out there. We took her car (I drove), and she’s a social person, so on the long drive out from DFW, occasionally one of her friends would phone her, which would automatically interrupt our car-stereo reverie of Emmylou or Waylon or vintage Kris Kristofferson (we compromise well on driving tunes). I’d silently take in the speaker-phone conversation between Mom and Whomever, and Mom would say, “We’re driving to Marfa!,” and her bridge partner or church friend would invariably go: “Marfa? Oh, wait. Marfa! Isn’t there some kind of art there?”

My mom is a psychologist and lives in Fort Worth; if she picked up a rock on her patio and threw it over her fence she would hit the Fort Worth Modern, the Kimbell, or the Amon Carter.  She walks to these museums all the time, and she’s been wanting to see Marfa for years. Her friends are not exactly shut-ins. But they don’t know Marfa. And why should they, really? But they know there’s “some kind of art out there.”

This is simply an intro to the following brief meditation on the size of Texas and the variety of people and concerns as it relates to art communities, cross-pollination, and even Glasstire. The drive from Dallas (my town) to Marfa is 520 miles. This is nearly the distance one would have to drive from Dallas to hit Birmingham, Alabama or Lincoln, Nebraska. It is well past the distance to reach Memphis or New Orleans. It is nearly the distance to Denver. In other words, in almost all directions, we’re talking a two-to-three-state bandit run to hit the 520-mile mark. (Note: the distance from McAllen, on the Mexico border, to Dalhart, in the upper corner of the Panhandle, is 863 miles. This is roughly the same as Madison, Wisconsin to Baton Rouge. Which—you get my point—are dissimilar.)

And yet, to everyone in the U.S. living outside of Texas, we’re just one big schizophrenic-yet-indivisible state. Texas: the arrogant land of weird and baffling contradictions: Ted Cruz and Ann Richards. Molly Ivins and George W. Bush. Skip Hollandsworth and Greg Abbott. Richard Linklater and Tom Ford. (Wait. What?)

But I can attest that the dispositional difference between the people in a Monahans Dairy Queen in West Texas and an Athens Walmart in East Texas feels as far apart to me as the distance between people in northern France and people in central Italy. Just totally different countries. It’s the same 520 mile distance, and in many ways, within Texas, we’re dealing with a similar kind of vast cultural difference. The regional wrangling of interests that have always made civic compromise and cohesiveness in this country nearly impossible since the get-go also exist within the microcosm of our state, and the shit-flinging hysteria on one side, and delusional hope on the other that America might one day resemble a functional and reasonable Scandinavian country (or maybe Canada) can all be seen playing out here.

Nonetheless, unlike these kinds of sociopolitical and cultural divides within this state, the various art communities in Texas seem to enjoy some flow and mutual appreciation, to and fro. The interest and language of art seems to travel well in Texas, and increasingly so. I do believe that Glasstire, which is the only outlet dedicated to covering visual art all over the state, is partly responsible for this (an intrepid bumblebee of sorts), but I also think there’s a kind of art-intelligence transfer that transcends 500-plus-mile geopolitical differences. Artists make art for the same kinds of reasons no matter where they are, and (and this is an important and) Texan art people are interested in other Texan art people because those above-stated kinds of contradictions are a shared concern, among artists, throughout the state. It sounds terribly oversimplified—this sort of “us against them” mentality– but despite the endless land mass, most of us in Texas who care about art (as we understand it) are watching what other art people in Texas are choosing to do with their time and energy, and how they’re responding to their environment. Or if they are.

In recent months, I’ve watched work from artists in just about every region of Texas make its way to other regions in Texas. It happens constantly. Celia Eberle (Ennis) to Beaumont; Camp Bosworth (Marfa) to Albany; Margarita Cabrera (El Paso) to Dallas; Ludwig Schwarz (Dallas) to Houston; Gregory Ruppe (Dallas) to San Antonio; Hills Snyder (San Antonio) to Lubbock, Danielle Georgiou (Dallas) to Marfa, Rick Lowe (Houston) to Dallas. You get the picture. The state, despite its size, enjoys a remarkably active farm-to-market road system for current working artists. This is unique in the U.S. In Texas, a town needs only one of the following to make art pop up there: 1) a university, 2) a few sharp galleries, 3) an accredited museum, 4) an artist residency, 5) a rich, well-traveled, collecting family who start a non-profit or private exhibition space. Texas is bent on importing art from outside of the state, yes, but that intractable “Texan” identity (whatever it means to each region) also drives ongoing interest in homegrown talent. And given the state’s 27 million people, there’s some talent to swish around. When Glasstire publishes a Top Five art events list each week, we really are perusing listings that cover 268,820 square miles.

Because we do have cities and towns across the whole state that meet the above criteria, from Orange to Levelland to Longview to Rockport. It’s exhausting, unlikely, and inspiring. Car trips are good. Putting out a call for contributing writers from the various regions is good. And I think my seasonal affective disorder has receded after a week in the dry West Texas sunshine.

So on Sunday afternoon, as we were driving back out of Marfa and we passed Marathon, I was looking out over the vast land and sky of the Chisos Mountains, and it was stunning in all its post-rainy season wildflower explosion—and I suddenly shouted: “Jesus Christ! Texas is so freaking big!” We had eight more hours to go before hitting my mom’s house in Fort Worth. I am not at all religious, but I sang along with Kris anyway: Why me, Lord; what have I ever done to deserve all the pleasures I’ve known?

Plush Gallery goes on a Summer retreat to...

That was a cool piece. I just returned from a stay at The Hotel Settles in Big Spring and felt the same way. I couldn’t stop looking out the windows and enjoying “my Texas” from such a different perspective. The long drive back to Houston was a treasure trail — solar wind farms, cowboy churches and an amazing rock ‘n roll radio station from Abilene that pieced it all together for a good while.

I will be driving from Houston to Terlingua the end of this month. I can’t wait. It used to be just getting to the outskirts of Houston was enough to make me happy. Now I need to get past San Antonio on old 90 for my heart to start singing. Texas really is a big state and a beautiful one.

….and there’s so much shit in Texas, you bound to step in some

Thank you for this. I have been a tad bitter about moving back to Texas 6 years ago after 40 years in NYC. It’s good to be reminded of the pleasures I’ve been overlooking.

I missed this piece when it came out. Very happy to find it now. I’d ride in your car anytime.

Your five point criteria for art popping up in any given town holds up well in Magdalena (population, between 900 and 1000: 2) a few sharp galleries.