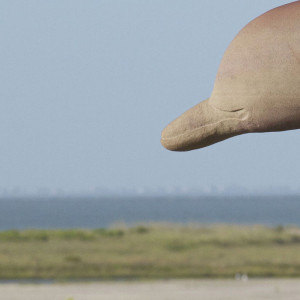 Galveston has a new monument, a pink dolphin carved from red limestone quarried from Corpus Christi. The dolphin-sized statue, installed at R.A. Apffel Park/East Beach on the island and conceived by artist Joe Joe Orangias, writer Sarah Sloane, and scientist Frank Pega and carved by Orangias, celebrates Galveston’s sexual and gender minority communities and its history of embracing these communities.

The statue takes its form and name, The Pink Dolphin Monument, from the storied Galveston watering hole the Pink Dolphin Tavern, as well as Galveston’s LGBTQ Pink Posse activist community.

According to its corresponding website, the “Pink Dolphin Monument is part of a network of monuments dedicated to gender and sexual minorities around the globe, but it is the first of its kind within Texas and the southern United States.” A list of other monuments in this global network can be found here.

The dolphin, nicknamed Sandy by park employees, was donated to the park by its creators, and its unveiling happens on July 25, 2014 from 5 to 6pm at R.A. Apffel Park/East Beach Pavilion, Galveston Island, Texas, 1923 Boddeker Road. It is open to the public.