June 19 is Juneteenth, the day that commemorates the 1865 proclamation on Galveston Island by Union Army General Gordon Granger ordering the freedom of more than 250,000 enslaved Black people in Texas. Galveston’s Juneteenth Legacy Project will dedicate the mural Absolute Equality at 11:30 AM this Saturday at the intersection of 22nd and Strand Streets in the heart of Galveston Island.

Painted on the east wall of the Old Galveston Square Building by Houston artist Reginald Adams, the 5,000 square-foot mural, commissioned by the Juneteenth Legacy Project, depicts four historical portals. Adams’ other murals include Houston’s Fruits of the Fifth Ward, I Can’t Breath on Travis Street in Houston, and Restorative Justice in Dallas, among many others across Texas. 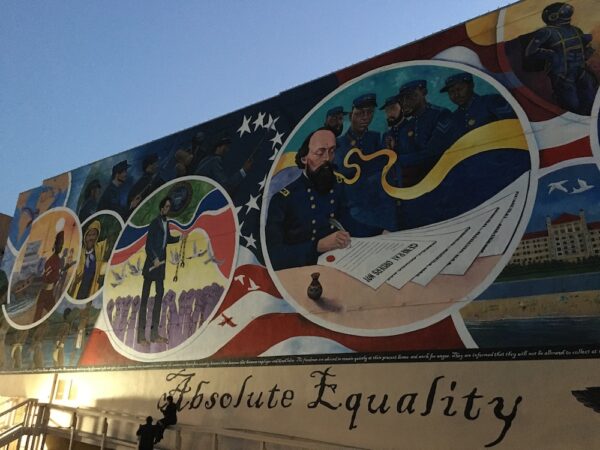 From a vignette of enslaved Africans being led onto slave ships, to a painting of Esteban, “the first non-native enslaved person arriving by shipwreck on Galveston Island in 1528,” to images of Harriet Tubman, Abraham Lincoln, and General Granger, the mural’s message is punctuated with vivid images. The text at the base of the painting reads “Absolute Equality,” words taken from the proclamation of that historical day’s General Order No. 3. 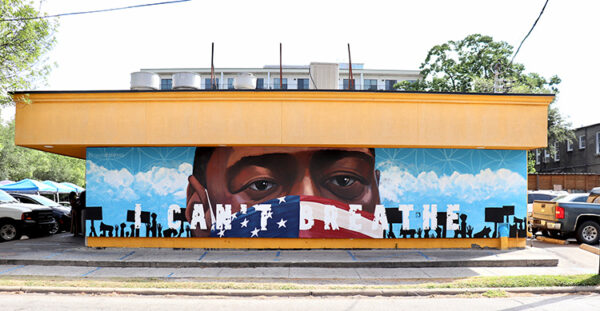 Reginald Adams,I Can’t Breathe. Location: 3711 Travis, Houston, TX, 2020. “The mural pays homage to George Floyd and others who have lost their lives innocently at the hands of law enforcement.”

The new mural, on the Mitchell Historic Properties building (owned by the family of the late Cynthia and George Mitchell), supplements the historical marker plaque on the site where Granger issued the proclamation more than 150 years ago. During the Memorial Day Weekend holiday, Samuel Collins III, co-chairman of the Juneteenth Legacy Project, along with members of the organization, walked with Fort Worth activist Opal Lee on part of her journey to advocate for Juneteenth to be a national holiday.

A recent New York Times article about the mural reveals that Collins was the driving force of the mural project. After reading an article by Austin philanthropist Sheridan Mitchell Lorenz, Collins contacted her with the idea. “I got chills thinking about that,” the article quotes Ms. Lorenz, as she recalls receiving Mr. Collins’ email. “I thought, ‘How come we didn’t think of that sooner — what an opportunity!’”

For more information on the dedication ceremony this Saturday, please go here.