Josh Bernstein‘s exhibition “Man Corn” is the third exhibition in Rice University’s newest art venue– EMERGEncy Room. Located on the second floor of Sewall Hall, where Rice Gallery is also housed, the project space is dedicated to showing emerging artists in a small room with a front, glass wall through which one can see the installation even when the exhibition is closed. Bernstein’s exhibition is best experienced in the daylight when it is backlit by a facing window and light streams through a sail a large red sail made from pieces of mens’ shirts, the centerpiece of his exhibition.

Over the past three years, Bernstein has cultivated a complex symbolic language related to global exploration, outsider status, and the grotesque. Textiles, prints, photography, performance, sculpture, and drawing are all tied together in a web of meanings that are utterly engrossing even as they defy precise explanation. For example, the red sail with an intricate batik coat of arms shows a double-headed eagle attempting to eat itself. The same bicephalous bird appears in two accompanying woodcuts where the print made from wooden block reflects its source and completes the symmetry of the images. At the center of the room is a tent of sorts made from a swirling construction of reeds that supports a carved gourd at its apex. These baroque works are intentionally allusive, yet undeniably visceral with organic textures and colors. The symmetry and repeated shapes of their forms imply a closed circuit of meanings and associations that likewise fold in on themselves in infinite self-reflection.

Bernstein’s research for his project began with a study of the Spanish explorer Álvar Núñez Cabeza de Vaca and his exploits on Galveston Island, which the explorer dubbed the Island of Doom. Cabeza de Vaca was part of a crew that, unsure of their location, wandered down the Gulf Coast desperately seeking Spanish territory. By the time they reached Galveston, the crew was navigating the gulf in a few small vessels, which they attempted to repair with their own clothing but ultimately failed. Without food or fresh water, the number of explorers dwindled significantly as they were forced to resort to cannibalism in order to survive. The crew was later imprisoned by the native 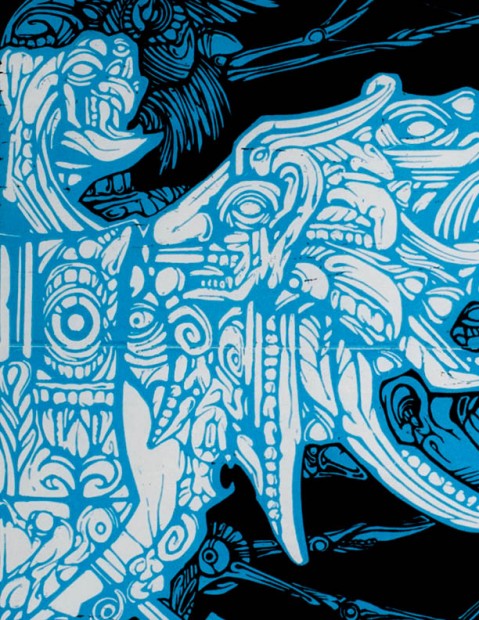 , who were disgusted with the barbarism of the captured Spaniards. Cabeza de Vaca was eventually able to escape with a few others and make his way to Mexico City. Upon returning to Spain, he published a book about his explorations around the Gulf Coast titled La Relación or The Report.

Although the historical details of Cabeza de Vaca’s story serve as a source for many of the materials and forms of Bernstein’s work, the artist is primarily interested in the ways that the conquistador’s life inverts false dichotomies of outsider and native, civilization and barbarism, heroism and desperation, etc. Bernstein’s invented coat of arms is symbolic of these more abstract ideas. It is based on a Mayan drawing of the Hapsburg crest and thus combines the aesthetic of an indigenous American visual language with the sign of the Holy Roman Empire. In Bernstein’s rendering, this merging of the new and old worlds consumes itself like the ancient Ourobouros symbolizing life, death, and rebirth. The brutality of the implied cannibalism serves almost as an exorcism, releasing the violent nature of the early meetings of Europeans and Native Americans. In the context of these ideas, the artist’s objects stand like relics of forgotten rituals to be reinterpreted by those who discover them. Such fetishization would feed into Bernstein’s work, which welcomes projections of mystery, horror, and the power of the undefined.

As a graduate student in art history at Rice University, I have had the pleasure of seeing the EMERGEncy Room come into being as an important venue for seeing new art being made in Houston. I hope that exhibitions like Bernstein’s will help to bring an increasing number of people to the space. The EMERGEncy Room is open Thursday, 5:00 – 9:00 p.m., Saturday 11:00 a.m. – 3:00 p.m., and by appointment. The gallery is closed during university holidays.